Today, Dave had a day of planning and set up for our electronics in the cockpit.  He had a few things he wanted to do at the same time.  There is a panel on the port side of the cockpit called the engine start panel.  It has the ignition, tachometer, fuel gauge, autopilot unit, and a 12 volt outlet.

The fuel gauge hasn’t been working for awhile.  Since Dave has been filling our tanks “by hand” with 5 gallon jugs instead of at a fuel dock, he thought he could wait to fix it.  Dave had mounted a 12 volt outlet in this panel that also hasn’t been working.  And he wanted to exchange the autopilot unit with the depth meter unit that is on the binnacle (a column that has the steering wheel, a compass and instruments).  So today is what Dave called “a day of discovery”.  Kind of like exploratory surgery.


The electronics are behind where you would sit on the port side.  So he had to empty the port lazarette to have access to the wiring.  The first thing he noticed was that the fuel gauge fuse was blown.  When he installed the 12 volt outlet, it had it’s own fuse.  He now can see that he installed it on the wrong side of the fuel gauge fuse, which was smaller.  So he replaced the fuel gauge fuse and will rewire the outlet with it’s own direct wire.  That way the outlet will have power all the time.  The way it was wired, it only had power when the engine was running.  We thought that would be OK, but the engine wouldn’t shut off if something was plugged in to that outlet.  We often charge our phones here while under way since we use our phone with the Garmin app with Active Captain (OK, sometimes we play solitaire).  The rewiring of the 12 volt outlet will be completed another day. 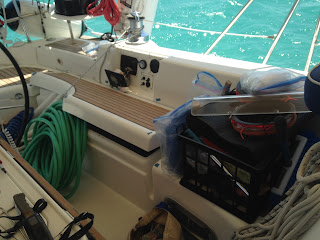 Next he looked into what he would need to exchange the autopilot control and the depth meter.  He didn't want to start that today because we were planning to move the boat again to the east side of the harbor.  We will be moving close to low tide.  The harbor is shallow, so we will want the depth meter to be functioning.  I won’t have as far to dinghy to shore for church on Sunday if we are on the west side of the harbor.  And the weather is no longer an issue.

He THINKS he has everything he needs to finish these projects.

We ran the water maker for about 3 hours.  We used the Nextgen generator and it worked great today.  Yeah!!  I spent time cleaning the heads and floors.
///electronics in cockpit

Posted by svluckofafool at 5:56 PM