May 4, 2016 Immigration, priovisions, and anchorage that is too close

We had a couple things to do on shore today.  Then we moved the boat to the western side of the bay for better protection from the west winds that were expected.  There were 3 fronts moving through with squalls and thunderstorms.  They may reach 50 k.  We rarely see anything over 25.  So we like to be in an area where the land will slow down the wind or at least the wave action on the water.

First, we headed to the north end of the bay to the airport.  The Customs and Immigration office was there.  I had to extend my immigration by May 10.   You can’t ask for an extension until within a week of the expiration date.  The charts told us there was a dinghy dock at the airport, but we didn’t check it out the last time we were here.  There was a small dock right at the edge of a rock wall about 6 feet deep.  It was kind of windy, and the dingy would be rubbing against the rock wall if we tied to the dock.  We were glad we had Dave’s fancy anchoring system along.  We dropped a bow anchor out away from shore.  Then we backed up to the dock, climbed out, used the pulley rope to move the dinghy back out to the float on the anchor.  We were close enough that we just tied the pulley rope to the dock.  It is a nice way to keep the boat off the shore, but have the bow to the waves, so the waves don’t fill the boat by going over the stern transom. 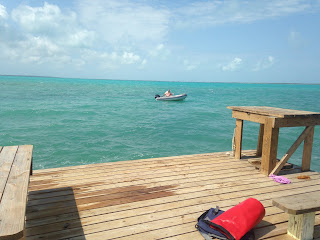 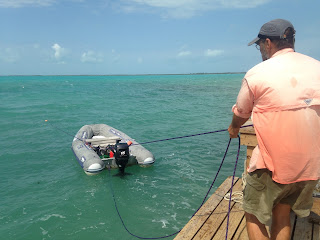 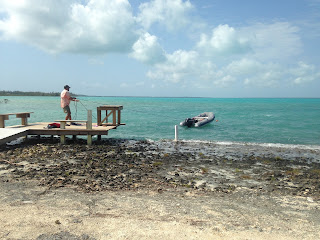 After all that was accomplished, we walked up the gravel road and found the terminal as we cleared the trees.  We were happy it was right there, because it was hot and humid once we were off the water.  We found the office and had no problem with getting the extension.  Instead of asking for 60 or 90 days, I asked to match Dave’s date of June 26.  IF we are still here, at least we will ask for an extension together and not have to worry about different dates again.  That’s what I would do in the future, if I flew home again.  Try to match each other’s dates.  We made the passage over to Eleuthera just because of the Immigration office.  Otherwise we would have continued north along the Exumas.

We went back to the boat to drop off our documentation folder.  We keep a binder with all of our papers and our passports.  We grabbed our garbage and headed to shore to provision.  We went to the main dock because we knew we could leave garbage there.  There is one further north, but it belongs to a restaurant.  We feel like we should give them our business if we are going to use it.  And it is harder to get to at low tide, which we had at the time.  We had a longer walk to the grocery store, but the walk feels great when you haven’t gone further than about 15 feet in a day or two.

It only took about 20 minutes to walk to the grocery store, not bad.  It was well stocked, but some things were pretty high priced.  The milk was $11/gallon.  The highest I have seen.  So we are sticking to our powdered Nido.  We wanted sour cream, so we paid almost $3 for 8 oz. (G”ot to weigh those wants vs needs).   The eggs were good, $3.15/dozen.  That was the main thing on our list.  I did pick up some apples, tomatoes, cucumbers and spinach and chips, lemons (didn’t have limes or these had aged and turned yellow).  The loaf of bread cost over $4 and was dry.  I wondered when I picked it up, and confirmed it with the first meal.  I guess I just need to get into a routine of making bread.  We did find a package of 10 frozen pork steaks for about $12.    We thought we should pick up some meat, since we haven’t had much luck fishing.   I don’t know how the locals afford their groceries.

We had our back packs and could easily carry everything back to the boat with us.  The wind was picking up and it was a bit of a rodeo getting back into the dinghy from the dock.  As I put the groceries away, Dave got the boat ready to move to the west side of the harbor.

There were about 4 boats already anchored on the west side.  Dave sat out in the cock pit watching other boats arrive.  He watched as two trawler boats (power) came over to anchor near each other.  One was closer to a sailboat than what we would have been comfortable with.  The sailboat called the trawler on the radio, so we eaves dropped.  The sailboat told the trawler that he thought he was a little too close to his boat.  The trawler said he was comfortable with the distance and that his anchor never drags.  So the sailboat let it go.

Dave and I then had a discussion about it.  And we have heard this complaint from other boaters.  The first boat in the anchorage kind of sets the rules for how the other boats will anchor (how much anchor rode or if you have set two anchors).  If we call a boat that is about to anchor too close for our comfort and they say they are comfortable, then what?  If we’re still not comfortable, do we would have to move.  You don’t want to get into an argument with them.  To say something along the lines of “we were here first” sounds like two kids on the playground.  And should there be an accident because they were too close, would your insurance company say “well, you should have taken precaution and moved”?  We are going to start quizzing other boaters about how they handle this.  There should be a polite way of getting your point across when they don’t get it on the first attempt.  Maybe something along the lines of: well we aren’t comfortable because………., so it would show good seamanship if you would just move …………instead of anchoring that close to us.”  ALSO, we saw these two trawlers at Long Island and we thought they had anchored a little close to us just so they could be together.  But the weather was fine, so we let it go.    If someone contacted us and said they weren’t comfortable with our anchorage, we would tell them we were sorry and move, or discuss why we thought it should be OK.  But to just say “well I am ok with it” and “my anchor never drags” seems a little selfish and naive.  There’s always a first time.

We did get some rain before going to bed.  But the stronger winds didn’t hit until about 1:00am.  We didn’t think it was too bad.  Dave got up to take a look outside at everything and came back to bed.  If it had been worse, he would have stayed up.  We even leave our key in the ignition in case we had to move the boat suddenly.  I think we got off easy on this one.   And the two boats anchored close together actually got closer to each other when the wind direction changed.  Hmmm.