We were up and listening to Chris Parker’s weather forecast at 6:30 am.  We may get some squalls today or tonight, but it doesn’t sound bad.  Then it’s smooth sailing for awhile again.

Dave got out our Sailrite sewing machine today.  The case is 10x13x20 inches and sits under our dinette table.  You do what you gotta do.  He wanted to make another sun protection cover for a fuel can.  So he took another old t-shirt, cut it apart and sewed it to loosely fit the can.  He wants to eventually get some material that will be sturdier and make covers that are more custom fit.  Anything that flops in the breeze will eventually be torn to shreds.  But his make shift t-shirt covers are doing just great for the time being.  He also patched the seam on one of our reusable shopping bags and reinforced all the side seams while he was at it.   When he finished, I had to give him a hard time by saying “you used white thread!?”  He also took up the shoulders on one of my tank tops that I consider a “boat shirt”.   It’s not the most esthetic alteration, but if anyone says anything, he said to proudly announce that it was sewn like a sail would be sewn.  So there! 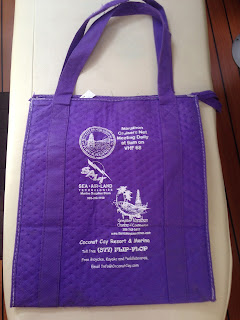 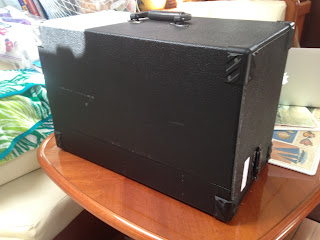 This morning I prepared the pork steaks for our Wonderbag.  I browned each one, set them aside, sautéed some onion, added 2 cups of broth, put the pork back in the pot, simmered it for about 30 minutes with some seasoning, and put the whole pot in the Wonderbag by noon.  Then you let it sit with no additional heat source.

About a week ago, after our last company, the generator decided not to work again.  In the meantime, we have been using the Honda 2000 generator.  Dave decided to dig into the Nextgen generator today.  He found that the heat exchanger had debris in it and build up, like heave plaque on teeth.  So he took it apart and soaked the parts in vinegar, or any mild acid would work.

Dave has a Folgers coffee plastic container that he uses for odd liquids or to hold parts when he is working on the boat.  It accidentally went overboard.  He yelled down into the cabin that he was going for a swim to fetch it.  Since we had the dinghy on the davits at the back of the boat, I asked him how he planned to get back into the boat.  It is right over our swim ladder.  The deck is about 5 feet above the water.   Once he thought through climbing back into the boat, he decided to put the dinghy in the water to go after it.  I told him we had another one on the boat that he could eventually have, but he wanted to go for a dinghy “joy ride”.   I started to call his bucket “Wilson” from the movie “the Castaway”.  So he called after the bucket “Folgie, come back.”  It was easy to pick up, then we went for our “joy ride”.  I compare our dinghy to having a convertible.

We checked out the beach/shoreline.  I used the clear bottom bucket to check out the dark underwater areas.  Some were just areas of grass and some were coral or rocks.  We checked out our anchor.  By now it should be set really good, and it was, but it’s always fun to look.
Then we just drifted for awhile, and Dave sorted through some of the anchoring equipment.  I just kept looking at what was under water.  It’s kind of like going snorkeling with out getting wet.  I am always fascinated by what is under us.

Back at the boat, Dave put the generator back together.  He also replaced the zinc at the end of the heat exchanger.  And it ran beautifully!  You really have to be mechanically inclined to live on a boat.  We didn’t want to overload it right away with the water maker, so we charged things and heated water.  That makes washing dishes so much easier.  The water heats whenever we run the engine, but after sitting a few days, it stays at room temperature.  So I usually heat water on the stove to wash dishes.

Our pork dinner turned out fantastic.  I meant to take a picture when we opened the pot in the Wonderbag, but forgot.  After about 6 hours, the pan is still hot enough that you have to use a hot pad.  Dave made an awesome gravy from the broth and I filled in the rest of the meal.  Yum, Yum. 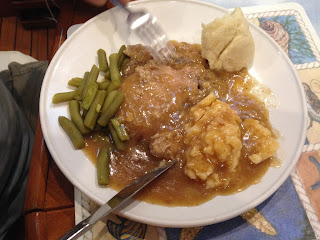 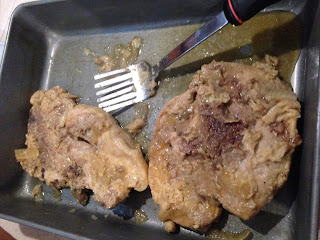 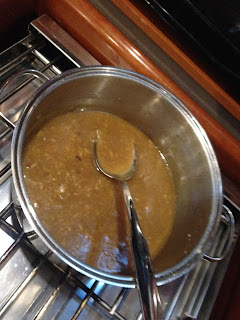