We decided to hike this morning and swim this afternoon.  May as well get hot and sweaty, then cool off in the water.  We took the dinghy to the park headquarters.  There is a $10/person user fee to enjoy the park, IF you stop into the office.  We thought it was worth $20 to support the park.  There are mooring balls here for $30/night.  I think they can accommodate more boats in the small areas near shore with the mooring balls, plus make some money.  We prefer to anchor.

From the headquarters, we hiked across a beach to the trailhead for Boo Boo Hill.  At the trail head the sign reads:  The Lore of Boo Boo Hill
On a wild, stormy day many years ago, a luckless schooner sank off Warderick Wells.  All souls perished in the disaster.  Not a single body was recovered for a Christian burial.  Local people say that if you climb to the crest of the hill at the bloom of the full moon, you can hear the voices of the lost souls singing hymns.  Boo Boo Hill is named for the sounds of the ghosts. Either by the light of the sun or the glow of the moon, this trail shares with you some of the enchantment of the Exuma Cays Land and Sea Park.

The trail was interesting over limestone rock, a creek bed at low tide, and sandy paths up the hillside.   It is a tradition to bring a piece of wood with your boat name and leave it on the top of the hill.  We knew this, but didn’t bother.  It was kind of tacky, but fun to look through.  We saw a couple signs from people we had met or seen at different anchorages.  The view was breath taking.  I believe the height was 60 feet.  You could see the length of the island, plus surrounding islands in the Exuma banks and out into the Exuma Sound.  And the water changes color with the depth.  So that was beautiful to see from above.  There were several blow holes, but it was close to low tide and not real windy, so we didn’t see any water spouting through them. 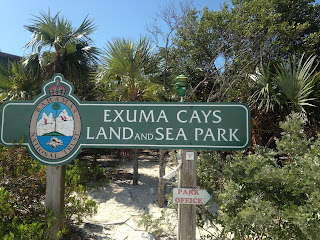 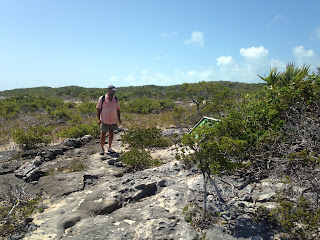 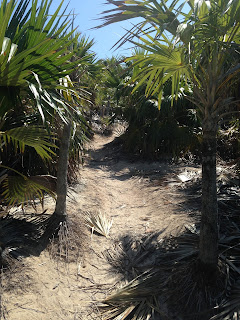 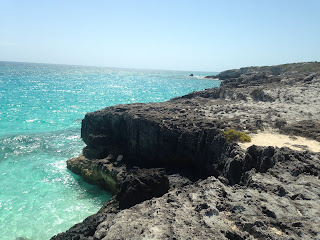 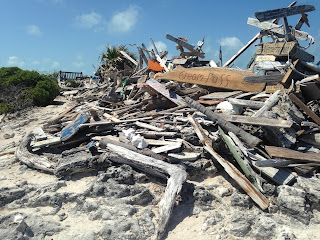 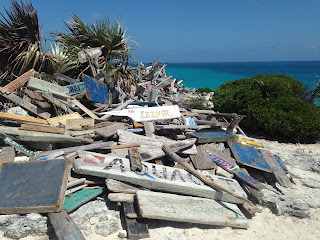 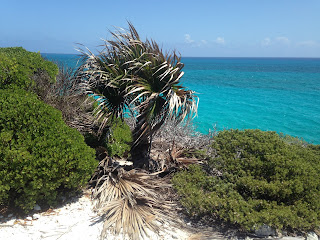 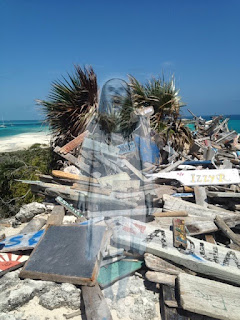 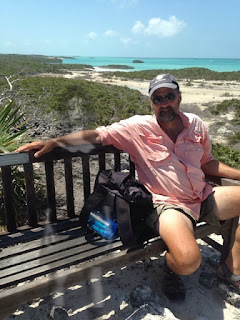 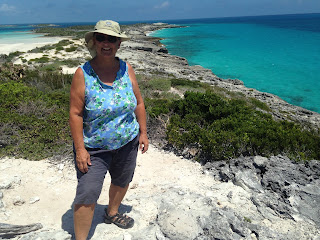 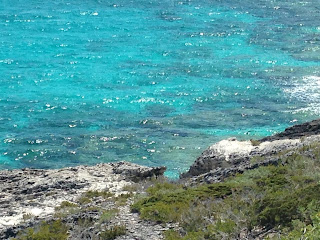 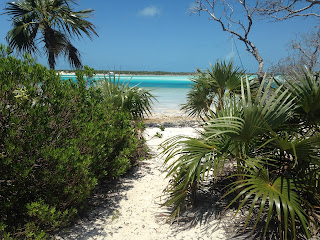 We returned to our boat for lunch.  Then we took off snorkeling.  We had decided on two different areas.  There were 9 snorkeling areas around this island.  But some of them were in strong current or on the side with crashing waves.  We were able to tie our dinghy to a mooring ball to snorkel these sites.  The first one was called The Rangers Garden out in front of the park headquarters.  The ocean floor had many growths of coral spread out over a large area with some clusters of coral.  There were a variety of fish.  And I saw some large queen angelfish, my favorite.  I haven’t seen them this big since I first dove in Cozumel, Mexico about 20 years ago.  I also saw a huge manta ray circling the area.  He must have had a 10 foot wing span.  And there was a lobster whose tail alone had to be 12-15 inches long.  Usually they are tucked  under a ledge and you only see their spiny tentacles.  But he was sitting in the open.  I thought I would see larger numbers of fish, since it was a sea park.  But there was a nice variety of marine life and coral.

Next we moved the dingy to Emerald Rock.  It is a rock/island off the shore on the bank side of the island and closer to our anchorage.  There were groupings of coral near the island.  So we tied to a mooring ball on the one closest to the island.  Dave was having trouble with his  mask and had enough snorkeling.  So he waited in the dinghy while I explored this area.  Then I swam around the island with Dave following me in the the dinghy.  We have had trouble with currents before, so I didn’t want to be out of his sight.  The island had an overhanging shelf that was interesting to look under.  There were schools of fish hanging out in several areas.  But I didn’t see anything large, like a barracuda or a shark, which was just fine with me.  We love the weather this time of year for snorkeling.   You aren’t cold when you get out of the water, even sitting in a dinghy.

We headed back to the boat for a relaxing evening.  We plan to get an early start tomorrow, so it was early to bed.


.click to see video of BooBoo HIll
Posted by svluckofafool at 3:50 PM