Today was a lazy day on the hook.  When we are on a mooring ball or at a marina, we kind of let our guard down.  Needless to say, Dave and Dean were moving a little slow today.

We just spent the day walking about town.  Dean checked out several of the gift shops.  We made it to Vernon’s grocery store in time for key lime pie and bread both hot out of the oven.  We returned to the boat and had dinner on board with our new baked goods.

We were able to sit out in the cockpit and watch the the light come on in the light house.  Great view from within the harbor. 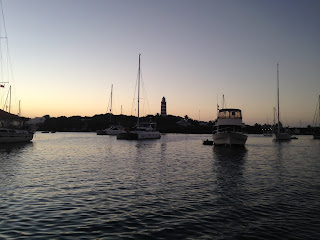 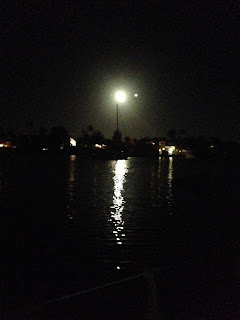 Wednesday Feb 24
Today we decided to try our hand at fishing.  We loaded up the dinghy and went to the north end of Elbow Cay.  We anchored in a sandy spot between coral heads.  We moved a couple times, but had no luck.  Dave and Harold were in the same area last week, but it was much calmer.

Then we took the dingy over to the beach where Juli and I found all the wild life in the water.  It was a higher tide than last week.  So the sea life was in deeper water.  We did find a few live conch, but too small to keep.  Dean was holding one while the whole body came out of the shell and hung from it.  We had never seen that.  He also found some big orange starfish and a couple dead sea biscuits.  It was fun exploring the water, and it was a nice temperature.  The air temp was 77 today.  The highest it’s been since we’ve been here this year.  Nice day to play on and in the water.

Back at the boat, we decided to have a late lunch/early dinner.  We had thawed some wahoo that we caught last week and wanted to share with Dean.  Dave did a great job of frying ours and searing his.

After dinner, I convinced the guys to play a game of Triominos with me.  They were good sports, but only lasted one game.  We had another nice evening in the cockpit watching the light house from our mooring ball.

Posted by svluckofafool at 7:39 AM