At the cross country site, we are assigned numbers according to the time we estimated for our race.  That way the faster skiers can just take off and it is less likely that you will have to pass someone.  The participants wear the race bibs and we line up.  They stagger the racers by 10 seconds and mark our start and finish time.  Pretty organized! 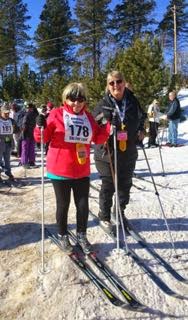 After our 1 km cross country ski race, Kaye also competed in the snow shoe race with Charlie Gould as her guide.  He is the son of Frank Gould, long time supporter of SFL.  He was about 25 years old and this was his first year as a guide.  Really a sweetheart.  The two of them were really into this race for the “fun factor”.  So I helped them out by planting 2 beers at the end of the trail.   They stopped, opened the beers, toasted, had a couple swigs, and finished the race with the beer cans in their hands.  Charlie’s quote “I like the way you think!”


After the races, we stopped at Lewie’s Burgers and Brews for lunch.  I think we are making this a tradition.  We kidnapped Kaye to go with us instead of riding the bus back to the hotel. My sister, Beverly, was back at our room actually sick.  My sister, Janice, came back from Sturgis and we spent the afternoon together doing a little shopping and visiting and letting Beverly get some rest.
Thursday evening was the banquet.  Beverly usually helps take tickets.  But I stepped in, since she was still sick.  My brother, Don, arrived early enough to save 2 tables for the Canadians, guides, and friends.  At the banquet, Miss Wheelchair America gives a presentation.  Every year, the reigning queen attends our event and says it is the highlight of their year.  Samantha Schroth was amazing.  She was 23, had been accepted into veterinarian school, had a dead tree land on her and became a paraplegic.  Now she is planning to become a physician specializing in spinal cord injuries.  We also have awards for outstanding participants and volunteers.  My friend, Tami Petersen, received the Spirit Award (which I received last year).  And Chris Jonas from Canada won the downhill participant award.  He has brought so many friends to the event.  Then trophies are awarded for the races.  All the Canadian participants received a trophy.  Good thing they brought Canadian wine as gifts in their luggage so they would have room to take home their trophies.


Posted by svluckofafool at 8:12 AM