Well, another week of Ski for Light has come and gone.  And I was sick for a week afterwards.  So I finally can catch up on this blog.  This way you will read high lights and not so many details.

On Friday, I went to the airport to pick up my sister, Beverly, from Oklahoma.  Of course that involved greeting several SFL friends in the process.  Bev and I had 2 guys buying us beer before we left the airport.  We met some of our Canadian friends, helped some onto a shuttle and gave one a ride to the hotel.
After getting everyone settled, we met a group of 11 people at Talley’s restaurant for dinner.  My son, Pete, was playing music there from 7-9:00.  Then we all moved across the street to the Alex Johnson Hotel’s pub, Paddy O’Neill’s.  My son was doing a solo gig from 9:00-12:00.  This is also where several Canadian friends were staying.  The place was full of Ski for Lighters and other Rapid City friends.  Did I say today that I love listening to my son sing?

Saturday:  Beverly and I were invited to dinner at our cousin’s home, Tom and Sharon Zeller, to celebrate Tom’s birthday.  Their 2 grown children that live in Rapid City were there, Lysann and Marc.  Also, Tom’s brother, Joe and his wife, Gail were there from Miller, SD.  Tom and Sharon have built a new home, so this was the “last supper” in their home.  We always have lots of laughs with our family.

Then we went back to Paddy O’Neill’s to hear Pete sing again and spend more time with friends. 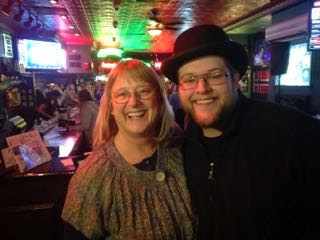 Sunday:  We repacked our bags to head to Deadwood for the week.  Tami Petersen picked up Beverly and me in time to help with registration at the Mineral Palace in Deadwood.  Bev sells t-shirts, hats, glassware, etc.  I helped sell banquet tickets at the registration table.  It was actually fun because I was able to say hello to so many people.

That evening, Bev and I had dinner with the Canadians at the Franklin Hotel.  They remodeled the old bar in the basement into a very nice restaurant.  What was Durty Nelly’s is now Legends.  The 5 Canadians were all visually impaired.  Kaye Leslie politely got everyone’s attention and announced  in a British accent “we will now have the reading of the menu!”, which was my privilege.  We were at a round table with a “lazy susan” in the middle.  It was handy with sharing bread or handing out drinks.  But it was also entertaining if Bev or I forgot to tell someone that we moved it :)
Posted by svluckofafool at 7:07 AM