We decided to stay put for a few days because of the strong winds that were predicted.  Before going to bed last night, we knew it was going to be a rough one.  It was the first time I had to brace myself with my knees to be able to floss my teeth.

Our bed is in the v-berth, which is the bow of the boat.  We were being tossed around quite a bit.  About 1:00 am, Dave was snoring and I was wide awake and starting to feel nauseous.  So I took a few blankets and moved to the salon area.  We still had the dinette table made into a bed from our passages.  The center of the boat doesn’t have as much motion, and I was able to sleep here.

Here’s what we learned about winds.  The Beaufort Scale uses levels of winds.  There are 5 different levels of breezes.  The last two are fresh breeze which was 17-21 mph, and a strong breeze 22-27 mph.  They described a strong breeze as “whistling in the wires”.  We were definitely in that level during the night and today.  The wind in the rigging reminds me of the sound of a blizzard on the prairie.  The rest are: near gale 28-33 mph, gale 34-40, strong gale 41-47, storm 48-55, violent storm 55-63, hurricane 64+.  At 10:00pm last night, the forecast off of the coast near us was for strong breeze of 23-30 mph with gusts to gale.  We felt those gust, and were glad we weren't out on the ocean.

We weighed our options of staying here another night or moving to a marina.  There is a marina about 5 miles from here that we wanted to check out for a future “hurricane hole”.  So we thought it would be best for us to go there now and check it out (wink wink).

About 1:00, we pulled up anchor and headed to Brunswick Landing Marina.  Earlier we called them to see if they had a slip available.  You don’t want to move the boat just to find out they can’t accommodate you.  Dave said our anchor had held very well and that it “came up with lots of good muck on it.”  After raising the anchor, he returned to the cock pit and announced “I like these cool windy days when it can blow the snot right off your face.”

Brunswick Landing Marina is in a channel dredged alongside the city of Brunswick off of a river.  So there is no current at the marina.  And it was much more sheltered from the wind.  We tucked up into a slip easily.  After everything was secure, we walked into town, found a happy hour and had a late lunch-early dinner at Tipsy McSways.  They had a hamburger with a list of toppings to choose from.  Dave asked if he could have them all and he did.  But he did bring half of it home.

We then spent the evening listening to our favorite team, the Green Bay Packers, beat the Atlanta Falcons on the radio on the boat.  We thought if we watched the game in a public place, we may not be welcome in Georgia cheering for the Packers. 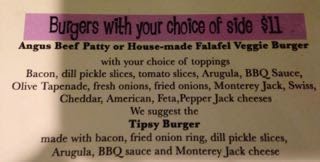 Posted by svluckofafool at 6:35 PM