My flight out of Aberdeen was delayed on Monday because of mechanical problems.  I had really short connections in Minneapolis and Atlanta.  So rather than get stuck in one of those airports, I stayed another night in Aberdeen.  Jim’s aunt Mary and uncle Henry were also spending the night on their way home to St Cloud, MN.  I was able to enjoy a nice dinner and visit with them.

My flight was at 5:10 am on Tuesday, so my loving sister took me to the airport bright and early.  We discovered at the airport that Jeff Sveen (Sven) of Aberdeen was on my flight.  I met Jeff at Ski for Light in the Black Hills.  We both were guides for visually impaired cross country skiers for many years.  But it has been over 5 years since he last guided.  He was going to Raleigh, NC, but would be in Wilmington on Wednesday.  It worked out on Wed to pick him up at his hotel and bring him to the marina for a tour of our boat.  Jeff is a lawyer, but also has a turkey farm near Huron, SD.  So he was here on turkey business.  They supply the turkey for Disney World, Firehouse Subs, Denny’s and other chains I can’t remember.   Pretty cool. 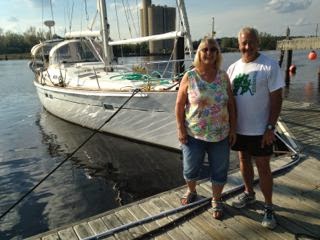 The boat is still being worked on.  Most of the parts that were sent in for repair have returned.  So this week they have been testing systems after the installations and still running into problems.  So more parts are being ordered, which will take a couple weeks to receive and install.  Since the repairmen aren’t working on the boat, Dave was able to do his own projects.  He has been working on electrically bonding the metal that is exposed to salt water.  This will help protect any metals from corrosion.

Since a lot of the electrical parts are accessed through our aft cabin (the garage), we still have the things normally stored in our garage out in our salon area.  We can’t even sit down at the table together for meals.  So it’s a good time for another road trip.  We are going to do some major reorganizing once this is all done.

While I was still in SD, Dave met another sailing couple from Canada, Rick and Nancy.  They spent 11 years building their own boat and have been living aboard for 15 months now.  We are enjoying their company.  We have gone out to dinner together, spent an afternoon shopping (since we still have the rental car), Nancy and I went to Riverfest in downtown Wilmington on Sunday.  Now we are planning a road trip “together”.  Rick and Nancy are renting a motorcycle and we will take our rental car.  We are heading to the Blue Ridge Parkway through the northern part of NC.  So stay tuned.

Wednesday, October 1 was one year since we moved out of our condo and onto our boat!!  "They" say that you should reassess your situation every year to be sure you want to continue living aboard.  We decided to give it another year :)

Posted by svluckofafool at 4:21 PM