This morning, we left the boat early enough to have breakfast at Carolina Girls with Nancy and Rick and get them to the Harley dealership by 9:00 am.  Rick rented and drove the Harley Road King by himself to our destination so he could get used to handling the bike again.  Nancy road with us to Blowing Rock, NC.  This was a pretty little resort town.  We almost just stayed here a couple days.


On Thursday, we drove along the Blue Ridge Parkway.  The fall colors were appearing and it was a beautiful drive.  Rick and Nancy had a wonderful drive on the motorcycle.  We stopped to hike to a waterfalls along the way. 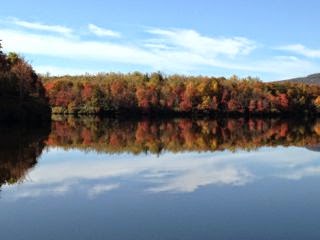 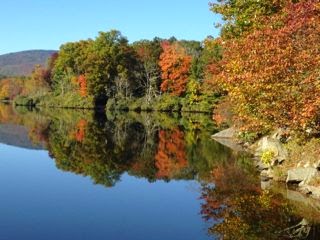 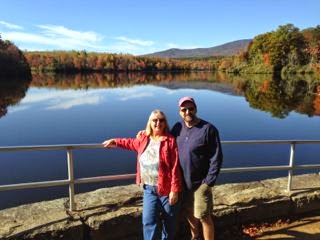 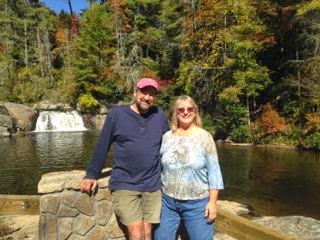 That evening we had dinner at a local restaurant in Bryson City, NC.  I had an Elk burger, first ever.  It was very good, but not much different than a hamburger.  We chose this destination because Rick wanted to ride the “Tail of the Dragon” the next day.  This is a section of highway that is 11 miles long with 318 turns.  It is on every motor cyclist’s bucket list.  Or least on the risk takers lists.  We watched a you tube video and decided we didn’t even want to drive it in a car.  Too many other crazy people that could ruin your day.

Friday morning, Rick and Nancy left early for their ride.  We drove up to the start of the “tail” and just checked out the bikers.  When anyone on a motorcycle arrived after driving though the Tail of the Dragon, I thought we should all clap for them and congratulate them.  Obviously, the bikers thought this was no big deal. Nancy was going to wait at the restaurant here while Rick took the ride, so we thought we might see her and talk to Rick after his ride (or take Nancy to the hospital if there had been an accident).  We later found out that Rick handled it well and enjoyed the ride with no complications.  Way to go, Rick.

We decided to spend the weekend in Atlanta, GA with SD friends that have been inviting us to visit them for years, Randy and Debbie Louchart.  We had a relaxing weekend in their beautiful, huge home.  We went to a Greek festival on Sunday and drove home on Monday.

Posted by svluckofafool at 1:23 PM