Thursday: My sister, Beverly, and I drove from Aberdeen, SD to Miller, SD in the convertible that I sold to her.  We helped some of my classmates build our float for the high school homecoming parade on Friday. 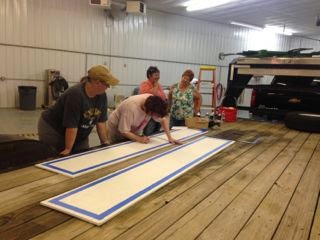 Friday: It was a beautiful fall day in the 80’s for the parade.  Their theme was “super heroes”, so we were the “original super heroes”.  Instead of attending the football game, I spent the evening with my family.  Miller has a population of about 1500.  There are several older homes that have been made into “guest houses”.  All my siblings and one niece with her family were able to stay together at one of the houses.  We planned a spaghetti dinner in advance with people bringing various parts of the meal.  A couple of other relatives joined us, too.  So it was a great evening of eating, drinking, and telling stories.

Saturday was spent visiting with family at the house and at the local nursing home.  Our aunt Dorothy is 98 and living there.  Several of us visited with Dorothy in a conference room instead of in her small room.  While we were there, her sister Julie from Faulkton and one of her daughters showed up.  So we were blessed to see the only 2 remaining siblings of our mother.  We also have one aunt living that was married to one of my mom’s 5 brothers.

My 40th high school reunion was on Saturday night.  It was a fun evening of visiting with each other.  Of about 90 classmates, 34 were there.  With that size, we were able to visit with everyone that was there.


Sunday:  Our family drove about 25 miles north of Miller to attend the Polo Bazaar.  Polo is a small community where our mother grew up.  We still have 3 first cousins that are farming on 3 family farms close to each other.  One was homesteaded by our great grandparents over 100 years ago.  Our other aunt, MayLou Schaefer Oakley from Miller was here.  2 of her sons and their wives were working at the Bazaar and one other cousin: Ken and Pam Schaefer, Mike and Ann Schaefer and Bob Schaefer.  We also got to see our aunt Julie from Faulkton one more time.  The Bazaar consisted of a great dinner, bingo, fish pond, cake walk, and country store with home baked goods.  There were other people from Miller and Polo there that we were able to visit with, including Joe and Gail Zeller, Vern and Ruth Schaefer, Lori Landgrebe Schneller and her mother, Bernita (friend since grade school).

I rode back to Aberdeen with my sister Janice.  We ran into more family at Walmart: Adam and Annie Zeller and their adorable kids Ramsey, Veda and Nolan.  Spent the evening doing laundry, packing and watching one more “chick flick”.
Monday:  We are meeting another classmate of mine for lunch in Aberdeen, Nancy Augspurger Carlsen.  Then I fly out at 3:00 pm for North Carolina.  My cousin, Jeanette Bowar Shamis will be on the same flight.  I don’t arrive in NC until 11:00 pm.  So I am including this day in my blog before it actually happens.  That is a first.  But I have a good internet connections here.  So we will be back to life on the boat after today.

Tuesday:  I jinxed my flight by writing in my blog in future tense vs past tense.  On Monday, my flight out of Aberdeen had mechanical problems.  I was not going to make my connection in Mpls, so I decided to stay in Aberdeen another night.

I had a nice visit with Jeanette Bowar Shamis before leaving the airport.  Then at Janice and Jim's, Jim's Aunt Mary and Uncle Henry were spending the night.  So it was nice to visit with them.  Janice was so sweet to get up and take me to the airport at 4:00am.  Jeff Sveen from Aberdeen was on my flight this morning to Mpls.  He had been a Ski for Light volunteer with me in the Black Hills of SD, but it had been about 6 years since we had seen each other.  That was a nice surprise.

Ready to load my last flight from Atlanta to Wilmington, NC.
Posted by svluckofafool at 10:13 AM