The morning was spent taking phone calls of birthday wishes and having a birthday breakfast.

We have been making pancakes with different fruits.  So Dave wanted to try using cherry pie filling to put the cherries in the pancakes and use the sauce part for the syrup.  After opening the can and putting it in a sauce pan, we looked at each other and Dave said "if we eat all of this, it will be like eating a whole pie."  So we scooped out some of the cherries for putting in the pancakes, used some sauce and stored the rest several more breakfasts.  It was a little on the rich side, so may have to come up with a different recipe to use the rest of the cherries.  But he enjoyed them more than a birthday cake.

I transported cushions over to Shelly's boat, the last of the saloon cushions!  She thought she's just cut them out on her bed.  She is leaving for several days starting Saturday, so we'll see where we end up with the outside curtain, the 2 cushions that make the dining table into a bed, and 2 small cushions that are in our cabin.  We'll see if we are still here when she gets back.

Dave and I went on a shopping excursion.  We went to West Marine for Dave and  Harris Teeter Grocery store for me all in the same plaza.  Worked out great!  Then we went to Chick fil-a to pick up chicken strips for the potluck.  Dave loves chicken, but he is still experimenting with our grill and didn't want to worry about burning it.

We headed to the potluck a little early to be able to "meet and greet".  Shelly had made Dave a cake.  She made a 9x13 cake and took it out of the pan and frosted it.  When you make a cake on a boat, it doesn't always look even because your boat may lean to one side.  I thought that was great, a real "boat experience".  There ended up being about 15 people there.  We had a great evening visiting with each other and stayed until almost 11:00.  And Dave wasn't the first one to start telling jokes. 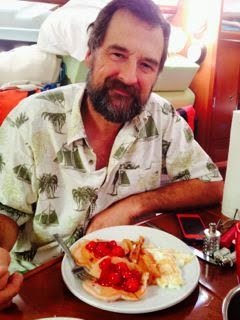 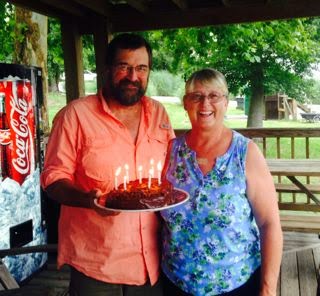 Posted by svluckofafool at 8:29 AM