June 5.  There was an Art Walk downtown Brunswick today.  2 blocks were blocked to traffic with vendors spread out in the parks and the streets.  Pete and a friend performed in one of the squares.  They had a woman join them for part of the time.  They had never played with her, not even practiced, and sounded great together.

During early June, Dave worked on replacing the port windows in the boat.  4 of the 6 were loose.  He originally thought he’s reseal/attach all 6, but has backed off to only the 4 that are loose.  He was using a special saw that he ordered just for this job.  It has a blade that would go between the window and the hull.  It was terribly noisy.  While he was in the aft cabin, he turned on a fan we have mounted there.  It started making a terrible squeaking noise.  I heard Dave call out from the aft cabin “I’m going to run this saw to cover up the squeaky fan!”  TeeHee!  I did the prep to clear out the area and clean up.  Now we have 4 windows taped with protection on the inside and out.

The new tool is an oscillating multi tool.  It has lots of attachments and get into tight places.  Cutting, sanding, shaving, buffing, etc. 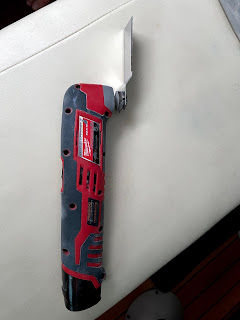 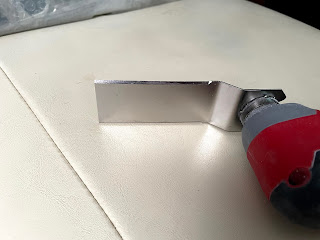 We took our Portland Pudgy out for a ride to check out the outboard motor.  While we were at dock one and the marina office, we decided to see how many people the boat would hold.  Lots of fun characters in this marina. 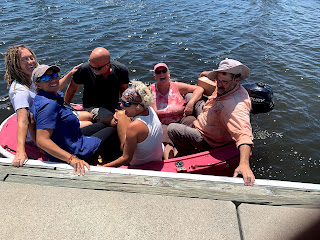 6-14 We spent some time on a neighbor’s boat discussing being crew for him.  He is moving his boat from GA to Rockport, MA.  He plans to go offshore for 4-5 days to Block Island.  He will have one other guy as crew along with me and Dave.  We were pretty excited about making the trip for the experience and fun.

6-15 I spent the day planning meals for us on the passage to MA.  But that evening, all of our plans changed.  My brother Don’s wife, Linda, suffered a heart attack with an aortic dissection and didn’t survive.  Words can’t describe the grief and sorrow.  She was such a caring, loving person and will be greatly missed.

We cancelled our sailing passage and started making plans to head to South Dakota.