We decided to go to St Augustine for a little vacation before returning to the marina in Brunswick, GA.  Another reason to go there was to find a raw water exhaust hose.  While Dave was working on the through hulls, he noticed that our exhaust hose was worn.  One of those accidental discoveries that will save us from a water leak in the future.  He had called all the West Marine stores in the area, and no one had hose on hand.  We called the Sailor’s Exchange in St Augustine, and they had a used hose in the diameter and length that we needed.  They close at noon on Saturday, so we’ll go there on Monday.

We were anxious to go off shore to see if we had taken care of the water leak(s).  We headed out the St Mary’s Inlet on the border of GA and FL realizing we didn’t have our usual offshore equipment, EBIRB, ditch bag, inflatable life jackets.  After about an hour of rough weather, we turned back and headed to the ICW.

From here, we had to travel past Jacksonville, FL.  WELL, there had been a boater Trump rally there.  So north and south of Jacksonville, we shared the ICW  with hundreds of power boaters racing by our boat.  It was a rough ride.  But that’s what we needed to test for our leaks, WHICH WE STILL HAD!! 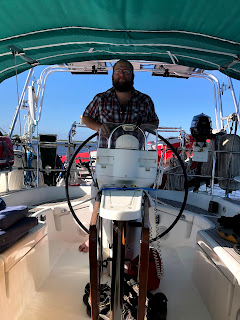 We got into St Augustine in time to get a mooring ball and go into town for dinner.  We’ll deal with the leak tomorrow.  Not all the restaurants were open.  Several were just opening again after the COVID 19 shut down.  We ended up with burgers at the Mill Top Restaurant.  I was one of those annoying people that stared at their telephone during dinner.  There was another replay of a Jimmy Buffet concert.  Tonight they played the video that Pete and I just sent in from the beach on Mother’s Day. 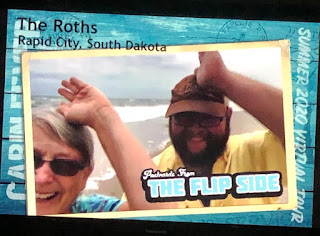