Sunday
When we got up Sunday morning, I was ready to jump out of bed and get moving.  Dave told me that the weather forecast didn’t look good for going off shore Tuesday night and Wednesday.  And north of Charleston, the ICW is known for shoaling and difficult spots to get through.  Plus, being a holiday week, there would be a lot of crazy boaters on the water.  So after discussing the pros and cons, we decided to stay until Thursday.  We hated to spend the money staying at a marina, but there wasn’t any place, in the direction we were heading , where we thought we’d feel safe.

We spent Sunday, Monday, Tuesday, and Wednesday doing little projects.  Dave used some webbing to sew straps for our harnesses that would run through the crotch.  A life preserver can come off over your head if it doesn’t have a crotch strap.  We also have hoods that are in a pocket in the life jacket.  We took one out to “play” with it.  It keep the waves from hitting you in the face. 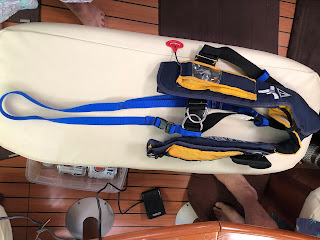 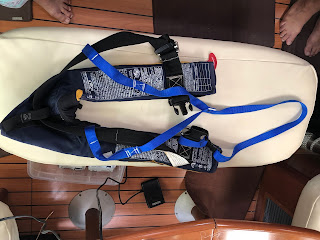 On Tuesday, I made another run to the grocery store and picked up ribs to grill.  I thought I had bought the precooked ones that only have to be heated, but these had to be cooked.  The  marina has a grill for anyone to use by the pool.  So I took them up there rather than use our propane for a couple hours. 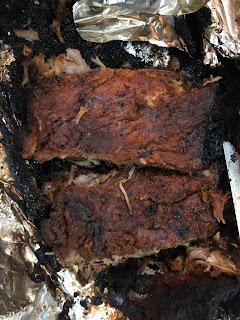 Dave also did some fiberglass repairs on the boat.  He repaired a light fixture, some screen latches for our hatches, and our drink holders out in the cockpit. 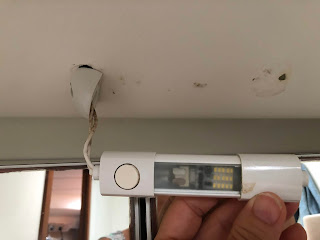 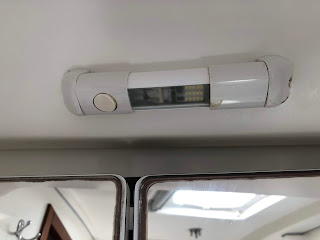 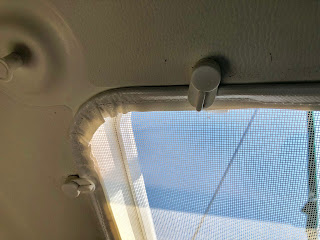 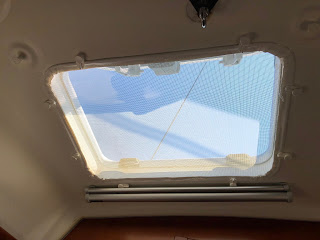 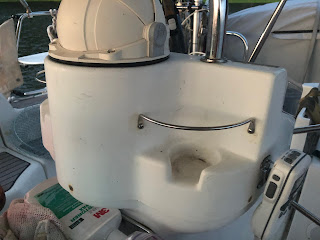 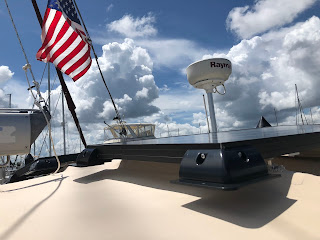 Sometime during these few days, we decided we should make a trip back to our storage unit in Brunswick, GA.  It was 200 miles away. and we won’t be any closer after we leave.  We were able to store a few things we really didn’t need and pick up a few things.  The real reason was because we were going to be traveling through a few states whose laws weren’t really clear on carrying some of our personal items with us.  That’s all I am going to say.

Since the rental car businesses weren’t open on Wednesday, we decided to stay another day and go on Thursday.

We also checked into adding us on our son Peter’s car insurance as additional drivers.  Some other boaters have done that so that car insurance will cover rental vehicles.  Right now, since we don’t have car insurance, we can get collision and damage though our credit card, if it is for 15 days or less.  But we have to pay the liability insurance, which runs $12-14/ day.

After discussing the situation with Pete’s insurance company, we decided to get our own “non car owner” policy.  It costs about $240/year and covers the liability for both of us.  We still have to use the credit card to cover collision and damage.  $40 of the fee is to cover under insured drivers if another car is involved.  We had checked into this when we first moved onto the boat.  I thought I remembered it being about $200 each.  And at the time, we didn’t know how much we would be renting cars.  We feel this was a wise thing to do.

At dusk, we sat out on our boat deck and watched fireworks from about 10 different locations.  It was a lovely evening with out fighting the crowds.

Posted by svluckofafool at 2:54 PM