Wednesday
Today we sailed to Long Cay where we saw the flamingos last week.  We arrived early enough in the day to have an early dinner.  Dave grilled hamburgers and I provided all the “fixings”.

Today Dave had been reading and telling me about “space tourists”.  Civilians will soon be able to travel in space to get a view of the moon and earth, but not land elsewhere.  He said people will experience “non stop vomiting and a continuous urge to pee” because of the unusual motion.  We were at another rough anchorage tonight.  So before we went to sleep, Dave said “I think we’re ready for space travel”. 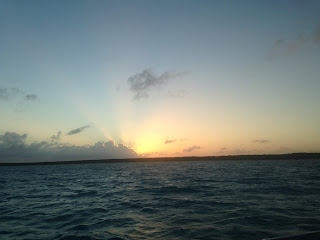 Thursday
About mid morning, I realized it was Thursday and not Wednesday.  I totally missed Ash Wednesday!  I was planning to not eat meat and fast today.  Boy I really blew it by having hamburgers last night.  So today was Ash Thursday.

We left Long Cay at about 8:00.  Remember, we had a rough night.  We sailed and motored to Clarence Town, Long Island.  As we were leaving, Dave noted that we were about 110 nm miles from Cuba, as the crow flies.  I wasn’t much help today.  I don’t think I slept 2 hours last night.

We put out the fishing lines, but no luck.  Our trip lines were tripped a couple times, but we thought we must have caught sea grass, because we didn’t catch anything.  When we brought in the lines at the end of the day, one hook had been bent straighter than the usual curve.   That was “the one that got away”.  Dave had talked to local fishermen the last time we were here, and he thinks it may have been a tuna.  From now on, we’ll pull in the hooks and check them after they trip, because that may be why the second one got away.  Live and learn. 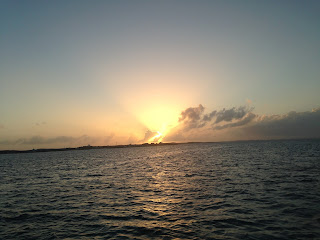 Posted by svluckofafool at 2:58 PM