I actually slept pretty good last night.  I wasn’t as worried about Dave as I was the night before.  I sent him a text about 7:15am.  I was anxious to see if he was ok, but I was hoping not to wake him.  I had to patiently wait for him to respond.  I went out for coffee about 8:00.  Adrian was outside, too.  So we all went to McDonald’s again this morning.  About the time we returned to our motel, Dave texted that it was quite calm and everything was OK.  He had slept in because he was parading around at high tide at 2:00am.  There was no rain at that time, so no more flooding.  After talking to Dave, we decided to check out and head back to the boat yard.

Dave had warned us that there may be bridges closed that could delay our return trip.  Traffic was normal, no rush of people heading south.  Driving through St Mary’s was strange.  A lot of businesses were boarded up, and most everything was still closed.  We had to detour around a traffic light that was down in an intersection.  We reached the corner that was about 4 miles from the boat yard about 11:45 am.  That’s where we found the road block.

We saw the boat yard’s courtesy car in the parking lot of the gas station at that corner.  There were 4 hurricane survivors from the boat yard having a tail gate party.  Rosie and Larry and 2 single guys were having a picnic.  We joined them to find out what the problem was and to hear their stories.  Rosie greeted us with a big hug.  It was so nice to see that they were ok. 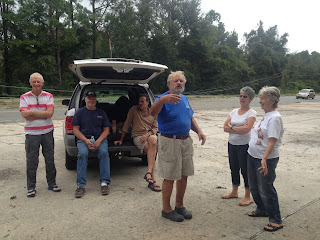 The 4 of them left the boat yard this morning to find coffee, since they didn’t have power.  They knocked on our hull, but Dave didn’t answer.  (He was sleeping with ear plugs.)  There were barricades at the bridge on the causeway, but no one around.  The bridge looked fine, so they went around them and went into town.  They had coffee and then picked up some groceries, which they had been snacking on in the back of the Tahoe.

When they returned to the boat yard, there were police officers blocking the bridge.  The Governor had ordered that all bridges in the county be inspected by the Department of Transportation.  They had been told that this would be the first one inspected about noon.  So we spent some time sharing our hurricane experiences.  I brought out my motel provisions and  added them to the party. 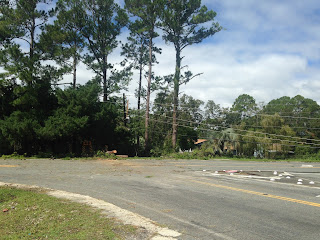 After about an hour, a different police officer came and visited with the one present and left again.  So I decided to check on any new details.  The bad news was that the police officer didn’t have any new information.  The bad bad news was that this could take hours or a week.  I asked what would happen if we chose to cross it anyway.  We would be fined.  So I asked how much?  They couldn’t tell me, but wouldn’t allow it anyway.   I did get a phone number of the county non emergency dispatcher to at least call to check on the progress if we chose to leave and check back.  They recommended we just get a room and check back tomorrow.  We weren’t ready to that, but would weigh our options if this lasted until 5:00.

Larry is an ex-marine, so he called the number I had a tried to give them the business.  I guess he knew the sheriff and did some name dropping.  He even asked to talk to him, but he was in a meeting.  So that left us with no new information.  Here Larry and Rosie had made it through the hurricane with no problem.  And now they may be faced with having to get a room with no luggage, not even Rosie’s purse or their medications.

John, an employee of the boatyard, came by about that time.  He also lives on the other side of the bridge.  They were going to look for a generator, so I took his number and told him we would call if the road opened up.  He told us he had a 17 foot fishing boat that he could launch and take us by river to the boatyard, if need be.  We all laughed as he left.  The 2 single guys decided to walk back to the marina.

I kept updating Dave occasionally.  The police officers had a shift change.  Occasionally National Guard trucks would come and go.  There were also power lines down in the area.   One police officer said we could walk across and have someone meet us on the other side. The bridge was about 1.5 miles from the corner.  So we would just bring a few things with us and get the rest after the raid opened up.  Dave had a ride lined up for us.  He was being a lumberjack today helping clean up the boat yard.

About 3:30.  Adrian, Brenda and I decided to drive into town to the boat ramp and see if we could pay a fisherman to take us to the boat yard in their boat.  The boat ramp was totally empty.  I guess we should have figured that, since everyone had evacuated the county.

Dave told us the boat yard owner, Rocky, was heading back and they were going to let him through.  Maybe we could connect with him and go as stow a ways in his trailer, like illegal aliens.  I called  him, and he did not have a guaranteed pass.  He was just hoping they would let him through.  He did have a tug boat at the marina that he would put in the water and come get us at the boat ramp, if need be.  He’d make sure we made it back somehow.

We headed back to the road block, hoping to follow him through.  About 4:30, the DOT ARRIVED!!  Rosie and Larry had left to get something to eat.  We left them phone messages and texts, but didn’t hear back from them.  Rocky arrived, but they weren’t letting anyone through while the bridge was being evaluated.  Within about 30 minutes, they cleared the bridge!!  They had to bring in one other police officer to help control traffic, but that only took about 5 minutes.  We fell into line with about 20 other cars waiting to cross that bridge.   It was 5:00.  That’s when we were going to give up and get a room if it hadn’t opened.

Back at the boat yard, Dave met us as I unloaded from Adrian’s truck.  It was SO good to see him.  He was busy telling everyone about how things went for a while.  A couple boats had sails that were caught by the wind and shredded.  An anchored boat had drug anchor and hit another boat damaging itself, not the one it hit.  And a branch had fallen on a boat causing a little damage.  All in all, not bad.  Then we headed back to the boat.  It was so nice to see no damage to our boat.  It was over!!  Dave’s favorite text from a friend was “hurricane, check”. 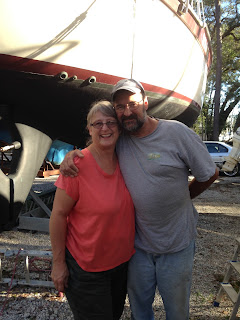 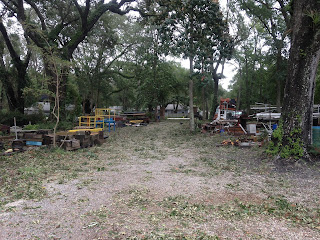 We sat in our cock pit and had a couple beers.  We shared some with a couple guys.  And the younger couple brought over some wine and visited for awhile.  They really appreciated having Dave check on their boat for them while they were in Atlanta.  They were planning to leave before the storm, but had to wait out the hurricane.  They are taking their boat to Marco Island on the west coast of Florida.  They have jobs waiting for them and plan to live on the boat.  You could tell Derek was having trouble relaxing and was thinking about what else needed to be done.  But Rosie (Dave calls her baby Rosie) enjoyed visiting with us.  She reminds us of our nieces.  She can give crap right back to Dave.

Posted by svluckofafool at 9:54 PM