I spent the rest of the month with Beverly at her home in Harrah, OK, east of OKCity.  We spent a lot of time at Kevin (Bev’s son) and Melanie’s.  They have a swimming pool, which we enjoyed playing in with the family.  We went to a great German Restaurant with them.  And Kevin smoked ribs and brisket for us on 2 separate occasion.

Mya had her 6th birthday party while I was there.  When Melanie’s mother arrived, Mya was so excited to tell her a secret.  “Mary Roth is going to be at my party!”.  I guess I was the guest of honor.

We had a great lunch at Beverly’s one weekend.  We have 2 first cousins that live in the area.  Gary and Lindy Dwyer live in Owasso, OK, near Tulsa, OK.  His brother, Doug Dwyer, recently moved to Oklahoma City.  Kevin, Melanie and Mya also joined us.  Always fun to reconnect with them.
A friend of mine from Miller, SD had a daughter living in Oklahoma City, Nancy Augspurger Carlson/Kelley Carlson.  Kelley recently graduated from Dental School in Lincoln, NE.  Now she is in a one year residency program at the Dental School in OKCity.  We met her for dinner one evening in Bricktown.  This is an area in downtown OKC that has a River Walk and several restaurants along the water.  She had all kinds of questions for me.  We had a fun evening and I told her to contact me anytime.

As a tourist, Beverly and I visited the part of town that was known as Stockyards City.  For many years, cattle were driven to Oklahoma City to the major meat processors located there.  We had a great lunch at the Cattlemen’s Steakhouse that opened in 1910.   We also toured the Oklahoma City Museum of Art.  We enjoyed a traveling Henri Matisse exhibit from Paris.  It included artwork of Picasso and Renoir and others,  We visited the permanent Dale Chihuly exhibit of blown glass.  Amazing work!! 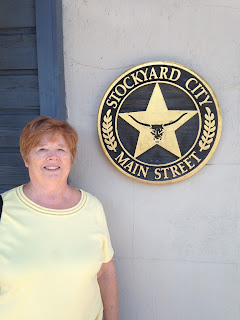 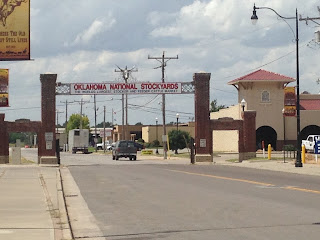 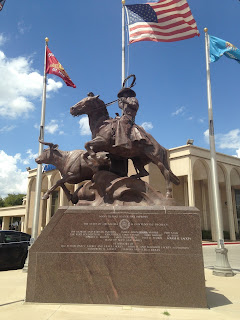