Wednesday, August 12
We had breakfast at Maggie Mae’s since we didn’t have any refrigerated food on the boat.  Then we rode bicycles to a small neighborhood grocery store to get the basics for the boat. We had an early dinner, then joined others at the marina Happy Hour to say hello to the other sailors.  Some still here and new ones arrived while we were gone.

Thursday, August 13
We went to the Farmer’s Market near our marina this morning (Tues, Thurs, Sat).  Great source of fresh vegetables, fruits and eggs.  The peaches were the best-vine ripened.  We also bought fig preserves, something new.  They were whole figs in a sugary syrup similar to honey.  Very good, but I wouldn’t buy them again-too sweet.
There is a free movie on Thursday nights at the yacht club.  We always forget, but remembered tonight.  I think it was called “the killer within in me”.  It was horrible.  About half way through, I went to the laundry room and worked on a jigsaw puzzle.  There I met another couple that have a 2006 Beneteau 423 (ours is a 2007).  So it was fun talking to them about similar boat issues.  She had just returned from a 3 month recovery of a broken arm.  She was walking through the boat carrying things in both hands.  She stumbled and hit the handle of the door on the head and broke her arm up high on the humerus.  Kind of worries me when you hear of things like that happening so quickly.  I immediately think I would stay with one of my sisters to recuperate.  But I would have a hard time finding either of them home for 3 months straight.  Our family loves to travel.

Friday, August 14
Laundry for me today.  Dave started reinforcing any through holes in the canvas (bimini an dodger) before we replace it on it’s frame.   We are concerned the rough edges will tear.  So he placed a small section of rope in a circle at the opening and then stitched around that to reinforce the canvas at each hole.  The dodger has 4 holes for a support bar that comes through to the outside for a hand hold.  The bimini has 8 holes to support our solar panels about the bimini frame.  I offered to help, but the canvas and the thread are pretty thick.  Even he was getting blisters.  So I just keep him fed and he is happy. 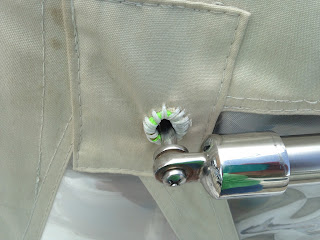 Saturday, August 15
Dave put our dodger back up today.  The boat looked so naked without it.  Much better.
I spent the evening at the club house playing dominoes-Mexican Train-with 5 other boaters.  One was an 8 year old boy from New Zealand.  I had to chuckle every time he said “that’s a pain in the bum” in his accent.

Sunday, August 16
I walked to church for the 11:00 mass and my friend, Rosemary, gave me a ride to a restaurant downtown afterwards.  I met Dave and 5 other boaters for brunch at a new restaurant.  It was a limited gourmet menu.  You chose one of 3 beverages, one of 3 entree choices, and one of 2 desserts.  And it was $20 per person.  Little spendy, but unique and very good.  I had eggs diablo and Dave had a pork and grits meal.

I played triominoes (spell checker didn’t like that word) this evening.  Something different and fun.  Dave finished the sewing and put up the bimini!  He actually prefers that I leave the boat and play games with others.  After feeding him, of course.  He gets a lot of work done while watching ‘Lord of the Rings” for the hundredth time.  And he gets out of playing games with me.  Works for me.  I’m getting my “social fix” while we are at the marina.

Monday, August 17
Dave is calling this “unlucky shit day”
His plan for today was to put the jenny sail and the solar panels back on the boat.  When he took the jenny sail out of the packaging, he discovered that the exposed end of the sail that was to be recovered had not been recovered (the sun cover).  It had been sent from Florida, where we dropped it off, to New Hampshire to be cleaned and reconditioned, and sent back to us.  So now it has to be sent back to Florida to have the area recovered.  We stressed that we were hoping to leave soon.  And they reassured us that they would rush the order and wouldn’t have to pay for shipping.  But it all still takes time, at least a week.

Then Dave went to the hardware store by bicycle to get a part he needed for the solar panels.  It’s about 8 blocks away, but it is 88 degrees and 67% humidity.  He returned cussing in search of his wallet.

We received some new phone charging cords in the mail.  They didn’t fit with our cases, but Dave was able to “adjust” them with his pocket knife.

In the meantime, we were expecting a packing slip for UPS to arrive in our e-mail to print and send the sail back to Florida.  After a few phone calls, Dave gave them a different address and it arrived.  Crazy day.

Tuesday, August 18  No engine
Today, the engine mechanic from Jacksonville was scheduled to arrive at 9:00 am to install our rebuilt fuel injector pump and take our boat for a sea trial.  We got up early and started moving things around so he could have access to the engine from all sides.  About  9:10, Dave called to see if he was on his way.  I knew something was wrong when I heard Dave say “Gosh Almighty! A phone call would have been appreciated.”  The guy had car trouble and couldn’t make it.  Their excuse was that they were going to call us when they knew when it would be rescheduled.  Right now it will be Thursday or Friday.

We put up the main sail today.  We were told we could put on SailKote ourselves.  It is teflon and it helps it furl tighter in the mast.  Dave had to feed the luff of the sail into the mast to run the sail up the mast.  He was painting both sides of the sail as it was raised.  I was in the cockpit raising the sail with a winch.  As more sail was raised, of course the area became wider.  So I would go out on the deck and hold the end of the sail out straight for Dave to paint.  Occasionally a breeze would pick up and want to fill the sail.  I thought one of us would end up in the water, or at least stumbling on the deck.

Wednesday, August 19
Second coat of SailKote on the main sail.
Thursday, August 20
Now mechanic is scheduled for Monday :(
Another boater gave me a ride to the grocery store.  We actually went to Walmart and Publix, so we are now well stocked.  After I returned from the grocery store, we put away the refrigerated items and immediately went out to eat!  Can you believe it?  A couple boaters wanted to discuss “buddy boating” with us up the coast to the Chesapeake.  Afterwards, Amy, who is new to boating, had to wait for someone.  So she helped me store my groceries, just to see what I do on my boat.  We took all the boxed items out of their boxes and bagged them.  And we marked the lids of the canned goods with what it was and the expiration date.  She was great help!!
Friday, August 21
I rearranged my food storage areas, regrouped items, and stored new items.  Cleaned heads.
Saturday, August 22
We opened the bilge so I could store food in containers under the floor.

Sunday, August 23
Walked to church, left at 10:20 in 80 degrees and 80% humidity.  Took 25 minutes and several paper towels to dry my forehead and neck.  My friend, Rosemary, gave me a ride back to the marina.
Dave drained the oil before the mechanic could install the fuel injection pump on Monday.
Monday, August 24
Engine mechanic from Jacksonville FINALLY made it to our boat.  He took about 3 hours.  Then Dave had to refill the oil and change the drive belt.  He washed his hands, but shredded cheese for dinner which removed more oil and grease from his hands onto the side of the cheese.  I just cut it off as if it were mold.
Tuesday, August 25
Dave worked on the aft vent covers for the air intake and exhaust for engine and generator.  He has never liked the position of these vents because if the boat was “pooped” (water up over the back end) water could come in the vents. Previously, he had removed the excess caulk and loose paint.  Today, he fiberglass repaired the cracks in the plastic. Then he sanded the covers and spray painted them.

Since there is a tropical storm/hurricane brewing, I thought I should update my blog.  Some people were checking to see where we were.  We chose this marina in Georgia because it is a good “hurricane hole”, fairly well protected.  We have weather sources that give us information before it gets to the media.

We are planning to head north up the coast, but will watch the weather as always.  Thanks for your concern. 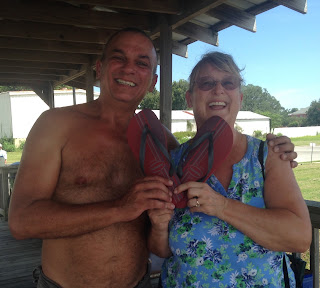 Ricardo watched our boat while we were in SD/MN.  Then we watched his while he was in Brazil.  He brought us each a pair of flip flops from Brazil.