UGH!!   Another week waiting for repairs.  It took all week for the insurance company to OK 2 more parts for our boat by Thursday.  But the parts won’t be here until Monday!  We are getting so frustrated.  I guess the weather wouldn’t have cooperated for us to leave this weekend anyway.

We are checking things off of our “to do” list.  Dave replaced the pump for our shower sump in the forward head.  When you shower on the boat, you have to turn on a sump to drain the water out of the shower stall.  Earlier this summer, we noticed water backing up into the shower stall.  So Dave researched different pumps and found one he thought would work on our boat.  And this week it was installed.  Our previous pump had a filter screen that had to be cleaned.  It had rough edges and I was always worried about getting scratched and picking up a disease.  This one doesn’t have that, yippee!

Dave made a motor mount on our stern for the new Lehr dinghy motor.  He found a leak in the wash down pump at the bow.  The leak had actually drained our forward water tank into the anchor locker, which went overboard.  Good thing to find and fix before we needed that water.  We had one outlet plate that was loose.  It finally quit working, so Dave fixed that.  Funny how you can put off some minor things like that.  Dave cleaned the air conditioner filter. He also checked the water maker filters.  Wanted to be sure they would be functional when we leave here.  We “pickled” the system when we stopped using it 3 months ago.  So we are anxious to use it again to see how that worked.  It should have kept anything from growing in the lines.

My focus has been on the galley.  I am trying to use up things in our freezer, since we have found some freezer burn on some meats.  Plus we want room for fish when we head south.  I am planning some meals for when we leave here.  We hope to make a couple over night passages.  So it’s good to have meals prepared that can be eaten cold or easily warmed up.  It's nice to need very little preparation because if the water is rough, you don’t want to be below deck for very long.  I even made home made noodles for the first time.  I have never been very domestic, so I am having fun with this.  Not bad for my first attempt, but they need to be thinner. 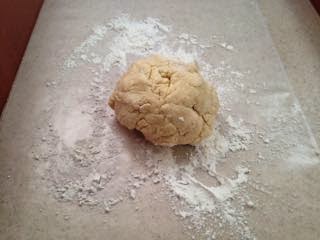 I am also working on consolidating our addresses and cleaning up our contacts.  I had gotten rid of my address book that I had for over 35 years.  The addresses were in a document in our computer.  But I usually needed an address when away from the boat.  So they are all going in our phones.  I’m sure most people figured that out years ago, but it was never a priority.

Halloween was the 40th anniversary of our first date.  I got the trick and Dave got the treat!  We were running errands that afternoon and ended up having lunch about 3:00, so no going out for dinner.  When we returned to the boat, we continued with projects and got ready for our one trick or treat-er.  There is a family here with a 5 year old son.  They had spread the word around the marina that he would be trick or treating.  If anyone wanted to take part, to have a light on their boat.  I moved my Halloween decorations from inside to the outside just to add a little to the festivities.  I now buy my holiday decorations at Dollar General and throw them away afterwards.


We ended up just having a few snacks and watching a movie.  But we had a couple drinks of something we invented.  I had a Moscow Mule back in SD at the Vortex in the Alex Johnson Hotel.  It is a vodka drink with ginger beer and lime and served in a copper mug.  I have only seen it in a couple places since then.  While we were in Charleston, Dave had a Kentucky Mule, same drink but made with Kentucky bourbon.  Dave likes Crown Royal, so we thought we would try the Moscow Mule with the Crown Royal.  We tried it with ginger soda in July, but weren’t impressed.  I had bought ginger beer at Trader Joe’s a couple months ago, just waiting for the right opportunity to try this.  Times have changed, can’t believe it took us this long to try this.  I had limes in my refrigerator wrapped in foil (helps keep citrus fruits), that were over a month old, but still good.  So what the heck.  The drink was delicious.  You use 1/2 lime, 1/2 bottle of ginger beer and 2 oz crown royal (or vodka).  I thought we should come up with our own name.  So we started brainstorming.  Since Crown Royal is Canadian, we started with Canadian Mule, but finally settled on “Royal Ass”.  They are very tasty.

Happy Halloween!
Posted by svluckofafool at 8:10 AM