Today, Shelly and I continued to work on cushions.  We cut out 2 more and she headed back to sewing.  We are using the dock carts for moving several cushions to the shower house since she is tracing them for cutting the patterns.  We also have been keeping the roll of material in the car, so we don't have to store it in either of our boats.  After cutting the pattern, she takes the cushions back to her boat with her, so she can fit the cover after sewing it.  And I have been taking finished cushions back to our boat.  Kind of reminds you of the Shriners in the parades.  We have to make so many trips with things to work around our small areas to work in.  Hope that made sense.

We have also decided to plan a potluck for everyone in the marina.  We used to do that weekly in Marathon.  Miami and Shelly would also provide a sound system for a jam session.  Shelly made a flyer to advertise the potluck for this Thursday and e-mailed it to me.  We printed a few and were going to put them in the office and the shower house.  I talked to the boat yard owner about putting some flyers on the boats of those that live aboard.  She suggested I put a flyer on every boat.  So she made copies for me.  WELL, I don't think she realized how many boats she had in her marina.  I started with about 20 copies and had to go back for about 20 more.  I placed about half of them in the morning.

When Shelly went back to sewing, I went back to the fabric store for 2 zippers and some velcro.  It helps hold the cushions in place and needed to replaced on only a few.  The zippers had to be nylon with plastic pulls to keep from rusting.

Miami came along with me because he needed to get a pole for their awning.  So we stopped at Home Depot for that.

When we returned, Dave and I moved the boat to a slip.  We were on the end of a dock, but they like to have that area available for new boats coming in.  Then they can move into their slip as slack tide like we were doing today.  We thought we would be there over the weekend, but ended up in that spot for a little over a week.  Even though the tide was slow, the current was still pretty strong.  Probably because of the storm last night.  So it took us a few attempts to back into the slip perpendicular to the current.  We made it and are now settled into this slip for the repairs.

I then finished putting the potluck flyers on every boat.  I felt like a girl scout going from door to door. I knocked on the boat first, then if they didn't answer, I used painter's blue tape to tape the flyer to their boat.  It's not like you can put it under a wind shield wiper or in their door.  You'd have to climb onto their boat to get to their door.  But with only 2 days notice, we thought we better get the word out.

After that, I thought I was having a heat stroke.  It was probably in the mid 80's with the same humidity.  I had a cool shower and took a nap.  Sometimes you just need a "time out".  I felt kind of guilty when I thought about Shelly and her sewing. 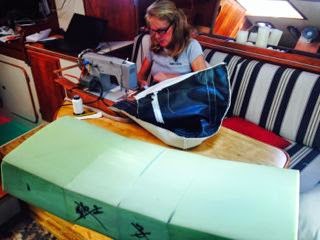 Posted by svluckofafool at 7:27 PM