Monday
Today we crisscrossed Long Island Sound to anchor on the Connecticut coast near New Haven.  You have to pick your anchorages according to where the wind will be from that night.  You look for the most protection for comfortable sleeping weather.

Tuesday
Another crisscross of Long Island Sound today.  We left at 7:00 heading for Port Jefferson on Long Island.  At about 9:00, we changed our plans for North Port.  But by 10:15, we realized we were making good time and could make it to Port Washington.  This is why we think we wouldn’t make good partners for a “buddy boat”.  We go with what feels right for the day. Setting up destinations with other boats just wouldn’t work for us.

In Port Washington the city has several mooring balls that are free for 48 hours.  That is so smart!!  They are on a first come first served basis, but this time of year was not a problem. 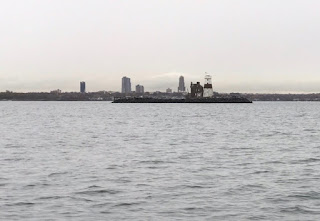 Wednesday
We put in a full day on shore.  There was so much within walking distance of the dock.  First, they had an awesome dingy dock and a place for trash.  The harbor master gave us a nice bag with some local information inside of it.  We were headed for a late breakfast/early lunch.  He recommended a Mediterranean deli just up the street.  Dave had a lox and bagel platter that was unbelievable.  I decided on lunch with a gyro wrap and tabouli salad.  Yummy. 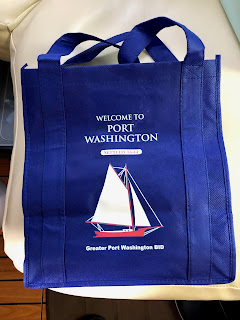 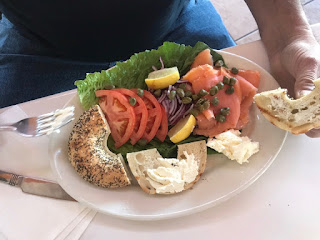 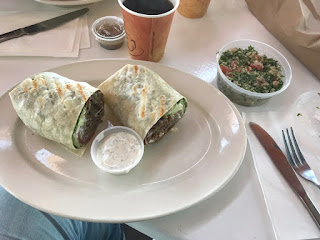 After breakfast, we walked to the library.  My phone needed good wifi to fix my icloud backup.  Dave said it needed an exorcism.  I lost some photos and notes for my blog since the last backup, October 31.  Oh well, all is good now.  Dave stayed longer to do some other updates, and I walked to the grocery store.

Dave met me at the store shortly after I finished.  We walked back to the dingy dock carrying the groceries, not much.  Back at the boat, I stored groceries while Dave got fuel cans ready to go to shore.

Dave was heading to a marina to get fuel and would need to make a couple trips.  He fills the 5 gallon cans, takes them to the boat to put in the tank, then goes back to have full cans on deck.  He is even thinking of filling our fuel bladder again before we head off shore to Delaware Bay.  We’re not sure about picking up fuel as we go through NYC.  So it would be nice to have that taken care of.  We called the marina to check whether they had laundry facilities and whether I could use them while he did the fueling. Everything was a go. So I loaded up 2 loads in one bag to take to the marina.

When we got to the dock, Dave had to call for an attendant to come help with the fuel.  I walked up the dock and found the laundry.  I was only 2 machines and someone was using them.  So I opted to walk about a half mile to a laundry mat.  It’s always quicker that anyway.

While I was doing laundry, Dave was a little frustrated with the marina and getting fuel.  First, while his cans were being filled, someone shut off the main switch for the fuel.  After calling the main office, they had to wait for that to reboot.  Next, when Dave's last can was full, the nozzle safety shut off didn't shut off.  So fuel splashed out over the can and Dave's hand by the time he released the nozzle.  Not only did it make a mess, but we had to pay for the fuel that spilled, since it was on our meter and hard to separate out.  Dave returned for the second trip at 4:15.  The marina closed at 5:00.   The attendant told Dave he didn’t feel like helping with any more fuel today!!  The whole time, the guy had been telling Dave he had boats to wrap/winterize, like that was his priority.  Dave searched for another marina in the harbor for fuel, but by then, the other marina was closed.  Not a good way to run a business!

It was about 5:00 and dark by the time I finished laundry.  Dave met me for pizza at a restaurant near the laundry mat.  I looked like a homeless person coming in wearing my foul weather gear and carrying my laundry.  They didn’t seem to have a problem with that.

We decided to splurge with a bottle of wine, a Greek salad, pizza and a dessert.  We had never heard of this dessert called tartufo.  It was an ice cream ball in a chocolate shell that was cut in quarters and served with whip cream.  Fun.  When they brought the bill, they explained that they didn’t take credit cards.  (Now I could see the sign by the hostess stand.). So we started scrounging pockets and come up with just enough including the tip, phew!  For some reason, I had thrown extra cash in my pocket.  We were glad we didn’t have to go for the roll of quarters in the bottom of our laundry bag.  That would have been a sight.  Maybe the neighboring tables would have thrown in a few bucks just to get us out of there.

We thought we would take a taxi back to the dock, but now we had no money.  So we walked a little over a mile back to the dinghy dock, which was fine.  The left over pizza wasn’t pretty by the time we made it back to the boat, but I’m sure it will taste the same.  Later we realized a taxi probably would have taken a credit card.  Oh well, the walk is always good, especially when you are on a boat for several days in a row.
Posted by svluckofafool at 12:16 PM