We took our time this week getting things back to normal.

While we had the rental car, we spent a day at our storage unit.  We bought some larger, stronger totes at Home Depot to replace a few that were stacked and collapsing.  We reorganized, brought a few things to the boat and a few things to give a way.  We are keeping our extra unit for another month.  It will give us more room to work on some projects on the boat.  And we will leave the jib sail and solar panels off of the boat until the end of hurricane season.

This was a first for me: at Home Depot, there were several RV’s and tents set up in the parking lot by insurance companies to help people with their hurricane insurance.  We even saw a FEMA center.  You don’t see this after blizzards in South Dakota. 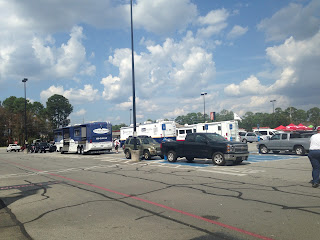 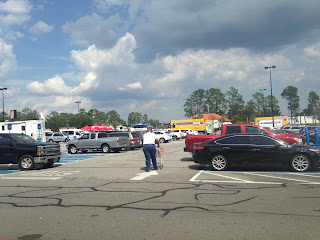 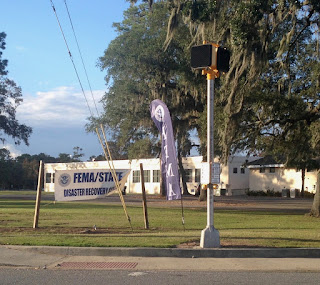 Dave is sewing new chaps for our dinghy.  He had started taking apart the original one before the hurricane and is still doing that a little at a time.  He is marking the pieces and will use them as his pattern. 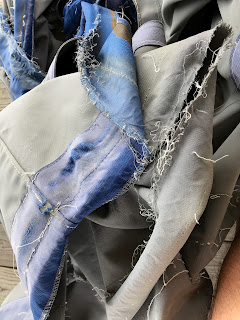 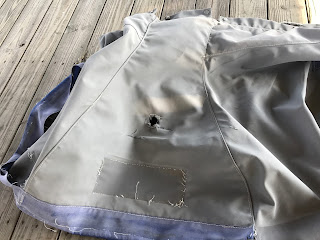 Dave had been talking to our neighboring boat from Sweden.  They were discussing Marelon valves.  Many people bad mouth them because the handles break. Mats (pronounced like Motts apple sauce) explained that you need to open them once a month to keep crud from freezing them up and to keep the o-rings lubricated.  If not, they freeze in place and the handle breaks when you go to use it.

Dave decided to check a Marelon Y valve for our air conditioning and water maker.  It had been on the water maker position for almost 2 years.  The handle didn’t break, but the crud tore the o-ring.  He had to order a rebuild kit, which by the way comes with a new handle.

About the same time, Dave was trying to pickle the water maker and it wasn’t running properly.  That’s probably why he had been talking to Mats about plumbing.  He discovered that there was a problem with the boost pump.  Dave repaired the boost pump for the water maker.  He also ordered a repair kit to have as a back up.  He cleaned the raw water screens and pickled the water maker again.  It’s hard on the water maker to let it sit for several months.  After repairing a few things, it ran smoothly.  While in the marina, we fill our water tanks with a water hose from the water source at each slip instead of using the water maker.

Dave sewed new edging on our hatch screens.  We are constantly placing and removing these on a daily basis, whether it’s for moving the boat or rain.  The edges are fraying on 4 main screens.  It’s hard to find them, even if you wanted to replace them.  So he bought a tough water proof material that was suggested by the Sailrite sewing machine company.  They have great support systems, even DIY you-tube videos. 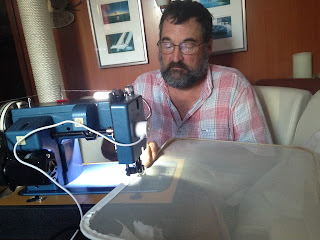 I have been doing the domestic chores as usual.  I have also been enjoying the social life in the yacht club: game night 2x/week, jigsaw puzzles, pot lucks, football games on TV.  Dave enjoys socializing in small groups vs the group mentality.  I get my game fix while we are here.

We participated in a boat naming ceremony.  Greg was renaming his boat to Gregarious.  Another boater, Peter, was the MC.  About 20 people showed up to share the champagne.  He had the new name covered with sheets hanging off his life lines until the correct part of the ceremony.  When I first arrived I thought “typical guy, didn’t care that his laundry was having out.” 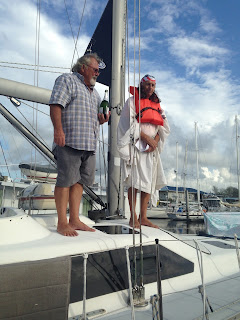 On Monday, September 25, 8 cruisers from the marina took 2 cars to St Simon’s Island on the Atlantic coast, 10 miles away.  We arrived at the beach in time for the sunrise at 7:15am.  Then we enjoyed breakfast together at Cafe Frederica.  The rest of the day was messed up.  Not enough sleep and too much caffeine are a bad combination. 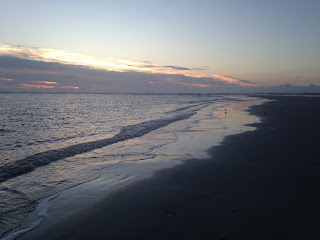 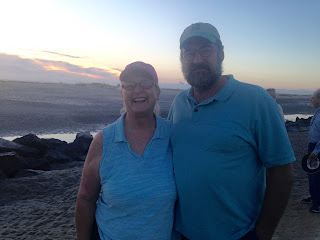 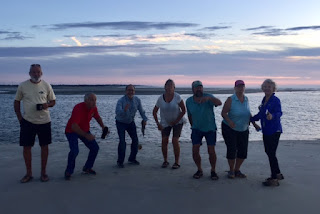 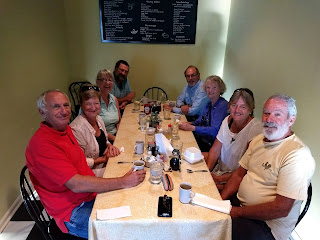 Posted by svluckofafool at 7:07 PM