Dave finished the dinghy chaps this week.  They turned out AWESOME!! 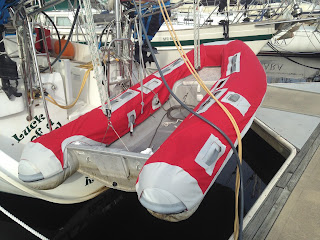 We use our aft cabin as our “garage”.  We keep spare parts and tools in there vs making a nice guest room.  Dave had been avoiding going in there because he needed to replace a light switch and replace a fan.   Earlier this year, one of our fans quit working in our v berth where we sleep.  We moved the fan from the aft cabin into our cabin.  Now that we were able to order new fans and had an address to send them to, Dave went to work.  He replaced the missing fan in the aft cabin and added a fan in our salon area.  Now we each have one for our own use in the salon.

Dave moved onto replacing some of our isinglass next.  There is a connector piece between our bimini and dodger.  It is mostly isinglass in a horizontal position.  Therefore water collects on it and stains the isinglass.  Dave replaced this piece.  And we vowed to keep this one cleaner in the future. 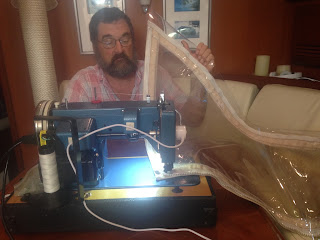 On Thursday, Oct 19, we decided to have a tourist day.  Friends on the boat next to us are out of town.  They have a car at the marina and they let us use it.  We decided to go to St Simon’s Island.  It is connected to Brunswick by 5 bridges that cross swamp area and the ICW and the Mackay river.  We had at late lunch at Gnat’s Landing.  They made their own pork rinds.  We have only seen them in chip bags.  Then we walked the beach for awhile.  We also went to the pier and lighthouse area.  After leaving St Simon’s, we decided to walk the Sidney Linear bridge to catch the sunset.  It has a 65 foot clearance.  My knees were sore for several days after that. 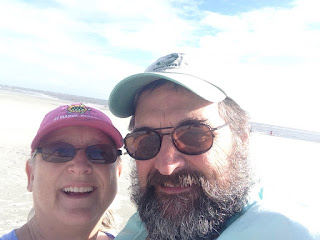 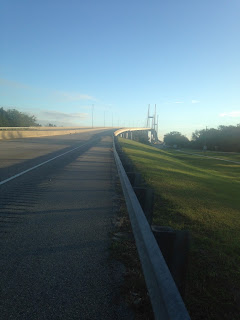 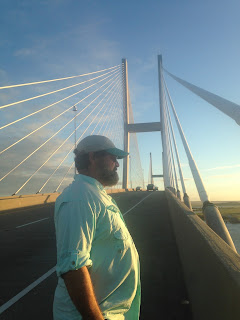 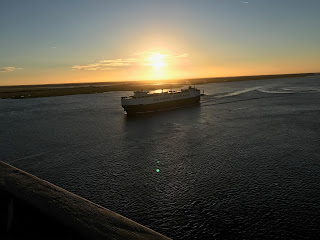 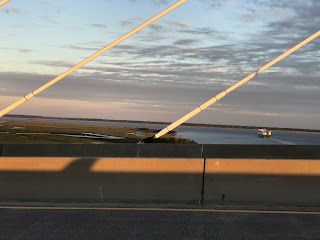 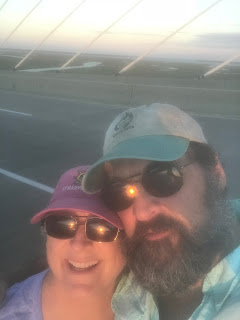 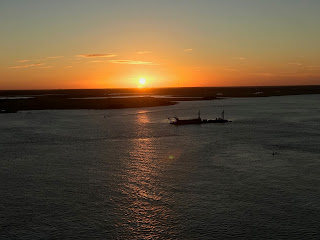 On Oct 20 Jonesy, from our marina, talked about cruising the western Caribbean.   He and his wife left California years ago, traveled through the Panama canal and up to the US.  They spent about 10 years doing that.  So they had lots of information for us.  Many people spend the hurricane season on the Rio Dulce in Guatemala.  I know of 2 boats that changed their sailing plans to go that direction after listening to him talk, especially with all the hurricane damage in the eastern Caribbean.  We are even considering it in another year.

As I was leaving the marina on Friday, I caught the beer truck replacing kegs.  There are about 300 slips in this marina.  Still can't believe they provide free beer. 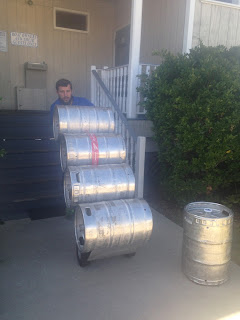 Dave spent some time rebuilding both of the Jabsco bilge pumps.  He decided to do a routine check of the bilge pumps.  They weren’t working.  There are two that run in parallel. He didn’t know which one was the problem, or if both were bad.  He found out that one had been rebuilt incorrectly and the other was locked up.  The diaphragms were frozen in place.  He ordered rebuild kits and went to work.   After talking to other boaters, he decided to add shut off switches.  Then he can shut each one off to trouble shoot in the future.  Of course that made the project a larger one than expected.  All this from a routine check. 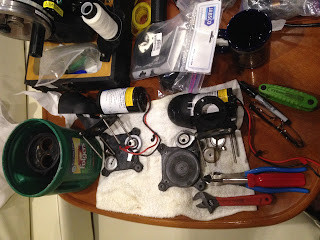 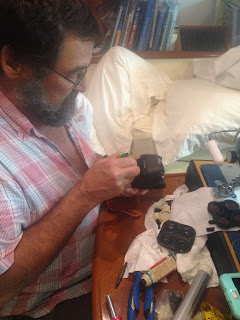 Dave made a cover for our Honda generator out of sunbrella material.  It blocks the sun and protects the plastic.  Our old cover was shredding. He also made covers for our gas and diesel jerry cans and water jugs.  Originally, we didn’t cover these cans.  Then we saw the sun damage.  Dave covered them in old t-shirts over the last couple years, which helped, but didn’t block the sun.  We could see the cans cracking.  And we had heard horror stories of people lifting the cans and having the handle break off.  Dave ended up replacing all of our diesel and gas cans.  The new ones are taller and thinner.  They will be easier move past when they are on the deck of the boat. 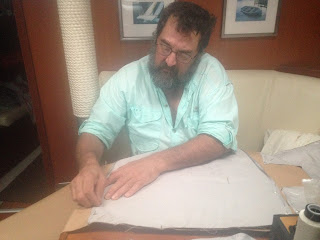 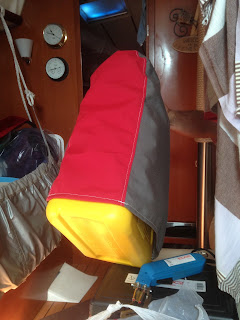 Dave did some reading to see what he could do to improve our Single Side Band radio transmission.  He decided to rotate the antenna on our back stay.  Of course to get to it, he had to climb out onto the end of the boom to reach it.  I never know where I am going to find him.  We haven’t had a chance to really evaluate the change. 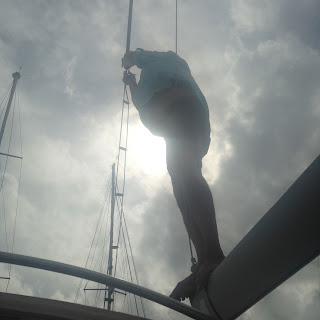 We have been trying out different dishes using Mexican mole sauce.  I guess when you make enchiladas with mole sauce they are called enmoladas.  Whatever you call it, they turned out pretty good. 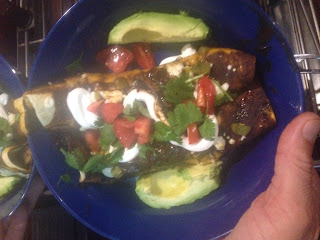 Dave periodically dives the hull with out hooka system.  Boats go through zincs faster when you are in a marina.  There is a lot more stray electricity in the water.  Actually, people have died in marina waters now that you think of it. 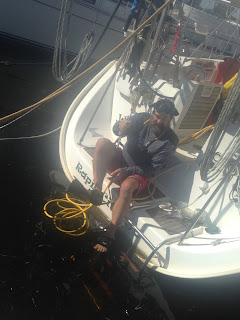 After all the work Dave went through with our leaking fuel lines, we were still getting a salty brown gunk in our bilge.  Dave figured out that the stainless steel exhaust port had rusted and was leaking.  The diesel exhaust mixed with sea water.  Since it was hot, it would evaporate and leave the salty brown gunk.

He spent a lot of time researching the parts.  Beneteau does’t make that part in the US (which is why we bought a “production boat”)  The Beneteau company in the US said they would check with their company in France.  We would wait and have to keep checking with them.  Every time he talked to them, the lady would try to sell him the wrong part.  Finally, he gave up on Beneteau.  He researched online for a similar part.  He found one that he had to refit.  He was hoping he could just pull out the old one and put in the new one.  It’s never that easy.

Dave finally had the parts he needed.  He had to pull out the old exhaust port, epoxy the screw holes, drill new holes, and then put in the new part.  During all of this, our boat had to list to port to keep this exhaust hole above the water line (lean to the left).  To make this happen, Dave hung our dinghy on the port side of the boat and filled it with water to add weight.  He makes do as needed.

He thought it all went fairly well.  The only problem was being “superman” as he was tightening the bolts and broke one.  He figured everything was sealed and tight.  So he will just keep an eye on it in.  He will clean up the rust on the original exhaust port and keep it as a spare. 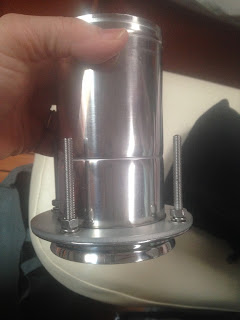 Several cruisers decided to have a Bloody Mary bar at one of our happy hours.  Some of us brought vodka and mix.  Some brought foods to add to the drinks.  Everyone had fun with it.  I know this is hard to believe, but it was actually my idea. 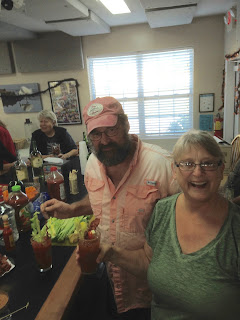 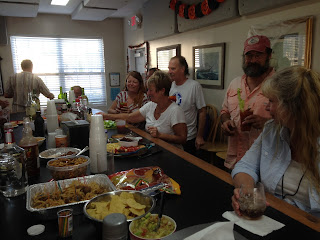 When we were here 2 years ago, we made friends with Ricardo Queiroz from Brazil.  He was passing through Brunswick, by car not boat, and stopped to have lunch with us and another couple, Rhonda and Bruce Little.  His boat in currently in Lake Worth, FL.  He had been in North Carolina with a friend, Ruthann, checking on her rental property there.  It was fun to find out how he was doing.  He will return to the Bahamas this winter.  He can only be in the US for 6 months. 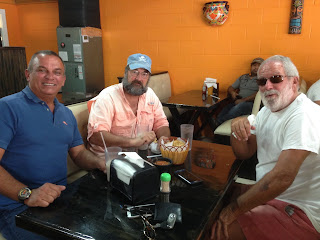 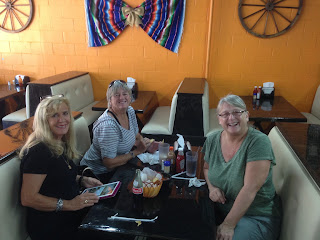 Dave had ordered lawn chair webbing to make fishing lures for off shore fishing.  It turned out pretty good. 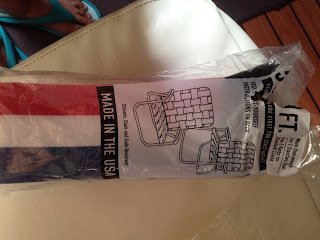 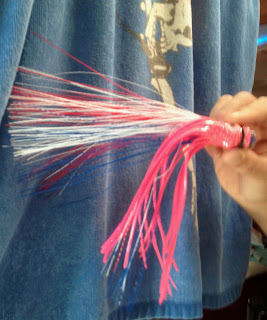 We found unusually shaped grapes in the Publix grocery store called Moondrops.  They were very delicious. 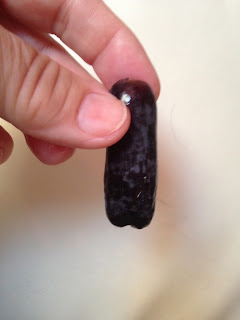 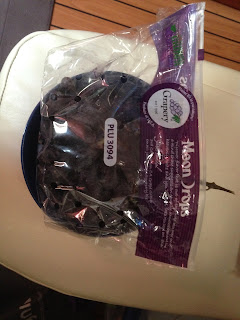 Posted by svluckofafool at 8:10 PM