First thing this morning, Dave topped off our diesel tank with the fuel be bought yesterday in fuel cans.  It’s best to keep the tank full, so moisture doesn’t form in the tank.  He was upset with himself for not finishing the job last weekend.

Dave was able to borrow scaffolding from the boat yard today.  He wanted to buff the old name of the boat off of our hull.  The name had been removed when we first bought the boat, but you could still see the outline of the name, or at least Dave could.

I spent the day inside working on some things on the computer.  Dave came in for lunch and really smelled like diesel.  He washed his hands a couple times before having lunch.   About 6:00, I was starting to feel light headed.  Shortly after that, Dave came in again and decided to check the bilge.  Sure enough, there was diesel fuel in our bilge.

After getting some fresh air, I started cleaning it up while Dave searched for the source.  He found 2 leaks, near the fuel gauge and near the tank whistle.  We have a tank whistle in the fuel line that will make an irritating whistle as fuel is being pumped into the tank.  When it stops, no air is passing the whistle, so the tank is full.  It doesn’t function when pouring fuel in from a can at a slower speed.  So Dave just listens for it to sound full and watches the overflow vent.  One of the leaks came from the hose clamps on the tank whistle.  The clamps needed tightening.  Dave had placed a new gasket in the fuel gauge recently, so the gasket had compressed and was leaking, also.

Funny thing is, when he filled 2 jerry cans with diesel on Sunday, he didn’t fill them completely.  At the nearest station to the boat yard, you have to pay in advance to get the diesel fuel.  Dave asked for 10 gallons at the counter inside.  They couldn’t figure out how to pre-charge by the gallon.  So he picked a dollar amount and only got about 8.5 gallons instead of 10 gallons.  If he had gotten the full 10 gallons, we may have had more diesel in our bilge.  Dave also explained that diesel fuel sold at a gas station is colored yellow.  If it sold at a fuel dock, it is red.

The up side of this is: they were simple things to fix.  And this didn’t happen at sea.  It was much easier to clean up and air out the boat here in the boat yard than it would have been at sea.  Not sure how we would have disposed of the diesel at sea.

We ended up having Dominoes deliver pizza for us tonight.  It was already after 8:00 by the time we ordered it.  The guy who delivered the pizza was in his 20’s.  He had never been to this boat yard and didn’t know it was even here.   He told us how he had always been fascinated by sailboats, and asked us all kinds of questions about living aboard.  We told him to find a small, inexpensive boat and learn to sail.  Then he can make future plans for a larger boat  Anything is possible. 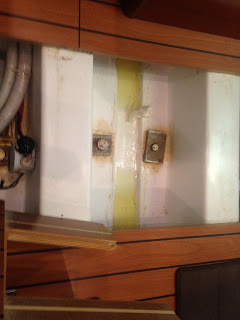 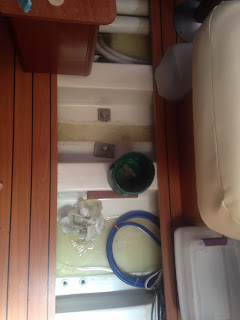 Posted by svluckofafool at 3:27 PM