Today was a rainy day.  Since it wasn't stormy, we decided to proceed down the ICW.  It was interesting to look at the homes and towns along the way.  Sarasota and Venice look like places we would like to explore.   It did rain off and on, but winds weren't bad.

The most fun we had today was with the bridge tenders.  We followed another sailboat for quite a ways today.  We arrived at the bridge at Siesta Key in Sarasota right behind them.  The bridge opened every 20 minutes, so we both waited.  Well, a little power boat came up beside us and stopped to wait, too.  They were actually in our way, because both of us were trying to zig zag in front of the bridge while we were waiting.  We can't go off of the channel because of our depth.  When the bridge opened, the little boat started through, then the other sailboat told us to go, because they were stopping on the other side.  As we went through, I could hear the bridge tender on a loud speaker telling the little boat how they were blocking our way and should have gone through earlier.  Then he said "Luck of a Fool, you just witnessed an example of the name of your boat  with the boat just in front of you."  We decided to call  him Looks like a Fool.  He did let us pass and apologized to us.

See the shallow strip of land along side the channel with birds standing on it? 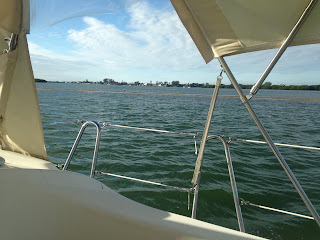 Later at Stickney Point bridge, I saw two people jogging across the bridge.  Just as they reached the tenders tower, he blew the horn to stop traffic.  It must have been pretty loud to the joggers.  They jumped, then stopped to see if they did something to cause the horn blast.  Then I saw them point at us and laugh and take off jogging again.  It was pretty funny to witness and I can imagine how that horn made them jump.  It's pretty loud to us out on the water.

At the Blackburn Bridge, we requested the bridge to be opened.  The bridge tender said he would have to flip a coin to see if he'd open it or not.  Then he came back over the radio and asked if we wanted heads or tails.  Dave called heads and luckily we won the toss :)  This one was a swing bridge.  So the bridge tender had to walk out to the middle of the bridge and switch something for the bridge to swing  open.  There have been times when we have had to wait in traffic for bridges that open.  It's pretty cool being the ones in the boat.  Everyone watches you go by and waves. 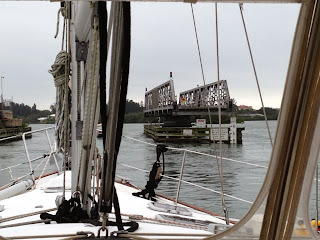 The last section of the ICW was really narrow.  So we had to motor past sunset to get to a bay where we could anchor for the night.  The channel is maintained at about 12 feet between the markers, but the sides get pretty shallow.  We were listening to the Packers game starting at 4:30.  Dave found the game on his ipad with Tune in application.  Then we hooked it to the stereo system inside the boat so it would come out of the speakers in our cockpit.  The controls for the volume were then inside, too.

Well, when we decided to anchor at 6:30, first of all, it is dark, which makes it hard for me to see Dave's hand signals.  Then we had the ball game on which made it hard for me to hear him.  It's a good thing there weren't other boats near us, because we had to shout back and forth to each other.  Hence the name "Luck of a Fool".   But we were successful.  We do have headsets to talk to each other, but they are in our "garage" (the aft cabin).

Dave made two awesome meals today with leftovers.  First, for brunch, he took leftover French toast and put slices of apples and a dollop of  cream cheese on each piece.  Then for dinner, we had a leftover steak cut up into pieces in the leftover mushroom gravy.  He made rice and added fresh coconut (thanks to Colleen Schneider) and the juice of a lime.  We put the steak over the rice and it was awesome.  I made us turkey sandwiches for lunch and feel pretty lame.  But I did invent a great way to eat Cheetos.  I filled an empty peanut jar and we would shake the Cheetos into our mouth, not having to get the cheese on your fingers.  Pretty clever! 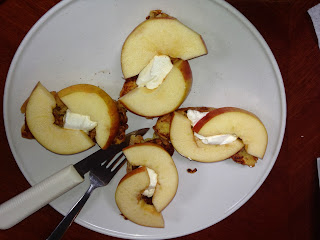 Posted by svluckofafool at 5:41 PM