On Thanksgiving Day, we sat and looked at our list of projects and the number of days needed to accomplish them before leaving Mobile Bay.  We need to do some work on the deck that involves drilling holes, reinforcing them and redrilling after 24 hours.  Ideally, it would be better to have the deck warmer.  With the forward heater not working, my toes were cold all night even with socks on.  So we decided we should buy a space heater for our comfort and to warm up the deck for our project.  Then we looked at each other and realized either stores were closed or there would be hordes of people at the stores on Black Friday.  We did not want to go shopping!  Then I remembered my Black Friday training with the Zellers in Mpls over the years.  I explained to Dave that if you go later in the morning, the traffic may be crazy, but the lines really won't be a problem.  We also needed some things at West Marine, so if we went there first, the other stores would settle down with time.

At West Marine, and I kept interrupting Dave's train of thought asking him questions.  So I went to the car for the ipad and occupied my time posting on Facebook and playing Spider Solitaire (my addiction).  I see our husband/wife roles reversing before my eyes.  Dave was our "homemaker" for the past 20 years.  And now I am working my way back into that role.  He is doing so many things for the boat that I can't help with.  So I feel useful being able to keep him moving by feeding him and doing laundry and making a "nest" in our boat.  Now here it is Black Friday.  Our roles used to be: me shopping and Dave waiting.  Now that we own a boat, Dave is shopping and I am waiting.

I also realized, after several trips to West Marine, that it is similar to shopping at a store that sells cookware (like Someone's in the Kitchen in Rapid City) and having the clerks tell you how to make a gourmet meal and then what dishes and ingredients you would need and the steps involved.  Actually, Dave learns a lot from the clerks every time we go there.  And he ends up saving money in the long run by doing projects himself.  We were ready to call an air conditioning/heating service today.  But now Dave is going to flush the system and have what he needs to do it in the future, as needed, for less than a service call.  I guess we have more time than money these days.

On the way to Home Depot, we are talking about the fluids we will need.  The conversation turns to "what is denatured alcohol anyway?"  With my chemistry minor, I turn to the computer.  Wikipedia's definition is: Denatured alcohol or methylated spirits is ethanol that has additives to make it poisonous, extremely bad tasting, foul smelling or nauseating, to discourage recreational consumption (now I remember).  Dave says "I should make that part of my name-Denatured Dave, or just Davenatured.  Just throw it out there and see what people say."  Kind of like how we explain that Dave is a "situation enhancer", whether the situation is going good or bad, Dave will do his best to enhance the situation.

Now that we've been to Home Depot and Lowe's and put in our exercise for the day (yesterday I didn't walk more that 10 steps at a time-didn't leave the boat. Boat exercise will be another blog topic), Dave decides a Guinness would taste great.  Well, it seems to be a Zeller tradition to have a few drinks after shopping on Black Friday, especially in Minneapolis (remember the meat raffle?).

We go to our favorite Irish Pub in Fairhope and order Guinness, an appetizer and a meal to share.  Dave was apologizing because he got we he wanted off the menu.  I said I got what I wanted-we went out for a beer.  We made it home just fine, but not sure too many projects are going to be accomplished tonight.  Every Sunday night, McSharry's has a Traditional Irish Music Session.  Anywhere from 4-8 musicians sit in a corner of the bar and "jam".  That appears to be common in an Irish Pub.  So when Pete visited us last December, we went there so he could join in.  I have included an amateur copy of one of his songs from my iphone.  But it gives you a feel for the atmosphere.  When we returned the second week, they all cheered "Pete's here!!".  Made his mother proud.  As a side, Pete had the opportunity to "jam"  in an Irish Pub in the northern part of London with our good friend, Kendall Bodden, who passed away in November.  He will be missed at Ski for Light in SD. Great memories. 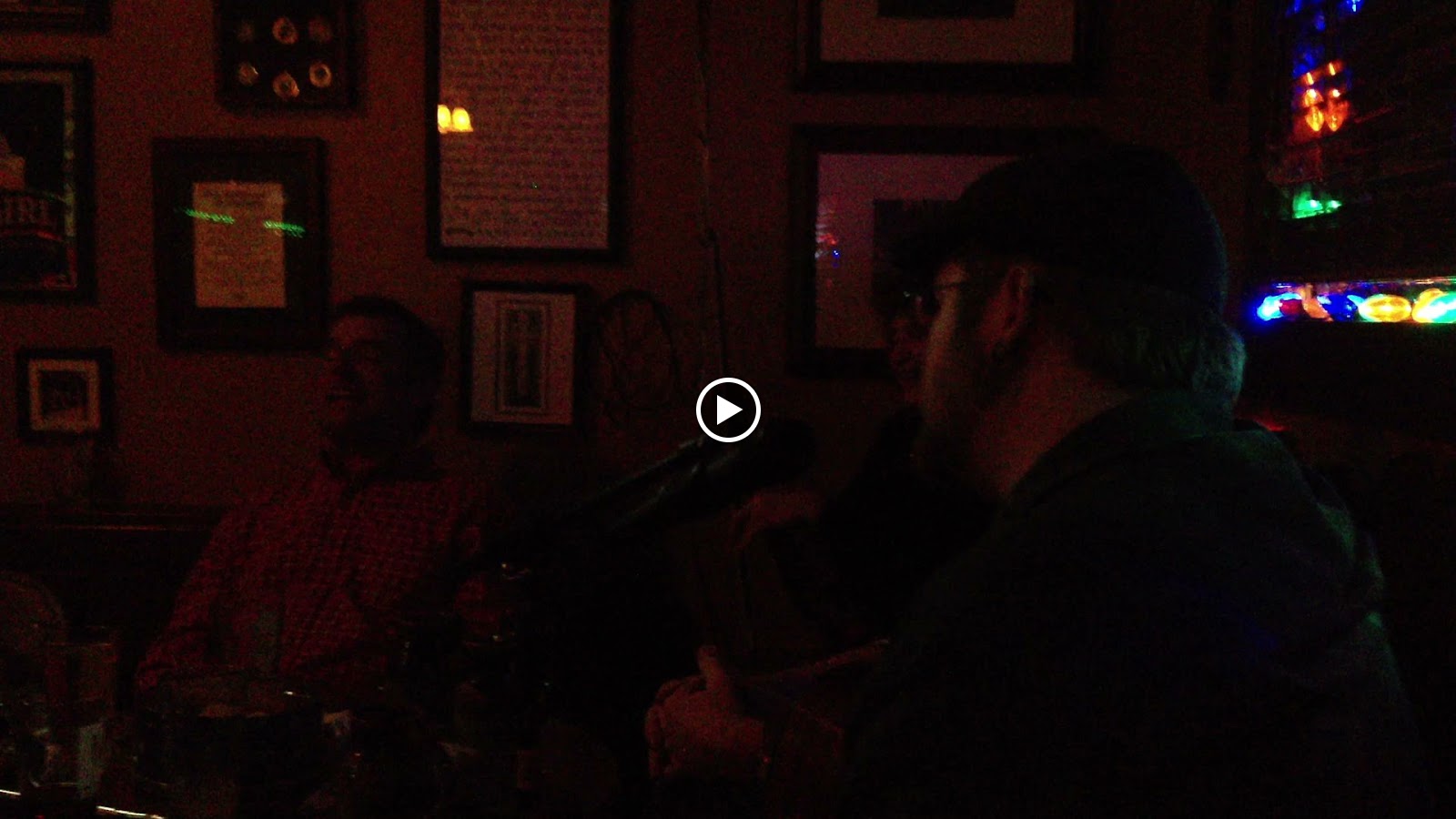 Posted by svluckofafool at 8:20 PM