Here are a few highlights of the month.

Since Jimmy Buffett’s concert tour was canceled this summer, he started showing past concerts on margaritaville.tv online.  I guess it’s usually a paid service to live stream concerts.  But he is showing past concerts for free.  They also have fans send in photos or videos of themselves, so we decided to send one in.  We took our dinghy out for a ride and made a video.  There were dolphins in the area, but I messed up on the first take.  So a friend put two videos together for us to send in.
!! Video on desktop

We later made a shorter video and it was used online during one of the concerts.


We took our boat for a day sail April 7.  We took the boat out into St Simon’s Sound, but not out onto the ocean.  We saw dolphins several times that day.  We checked out the wreck of the Golden Ray cargo ship in the sound.  We even saw people working on the Sidney Linear Bridge.  Interesting day. 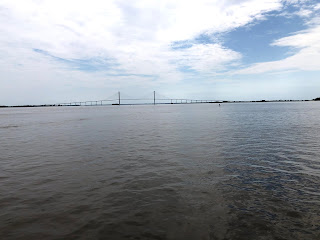 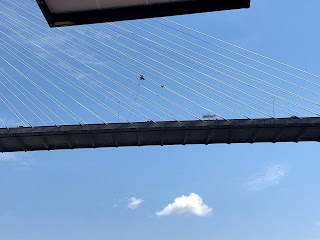 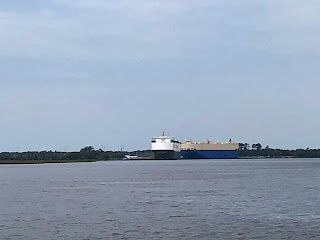 On April 9, Dave and another boater friend, Lilley, made cookies on the grill.  She wants to sell them at the marina.  Dave showed her an easy recipe for ESP cookies.  The recipe is one Egg, one cup of Sugar, and one cup of Peanut butter, hence the ESP.  They put the cookie sheets directly on the grill which caused them to burn.  They should have had a diffuser of some sort.  They still tasted awesome.  She planned to hand out samples, but she ended up making $10 from boaters that wanted to pay her for the cookies. 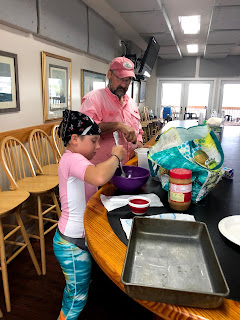 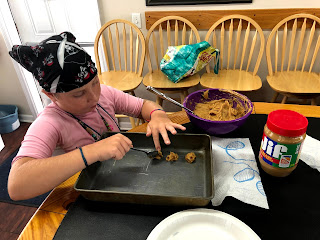 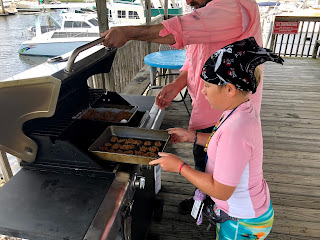 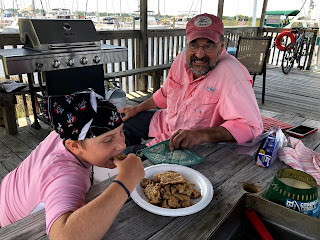 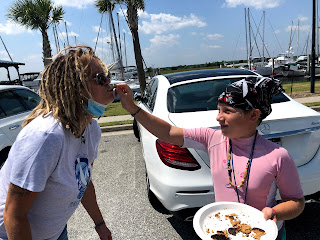 Lilly's mom, Trish, was working with gloves on, but wanted to taste the cookies 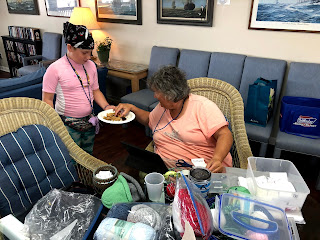 Dave and I are eating a low carb diet.  So for Easter dinner we had a Greek dinner.  I made tabouleh with cauliflower instead of couscous.  I made a “pita bread” with cheese, almond flour and egg.  We had chicken with homemade tzatziki sauce.  Yummy!!  It was strange not going to church because of the COVID 19 virus.  I think my mother must have been rolling over in her grave.  I watched mass live streamed from our local Catholic Church on Facebook.  On Palm Sunday, I watched the Pope say mass at St Peter’s Basilica.  That was great to see. 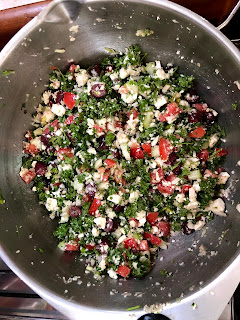 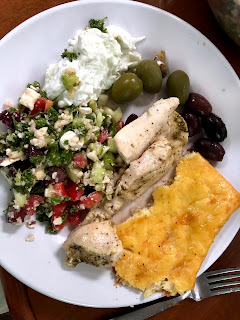 Dave taught Pete how to make an eye splice in a rope.  It forms a loop at the end by splicing the end back into the rope itself.  This was a double braid eye splice.  Every type of rope has it’s own instructions for the splice.  Dave added a stopper ball onto the halyard rope to keep the halyard from jamming at the top of the mast.  He had to cut off the old splice, add the ball, then make a new splice. 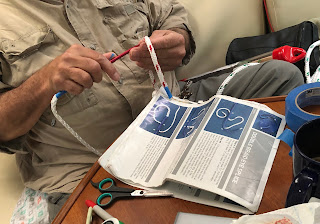 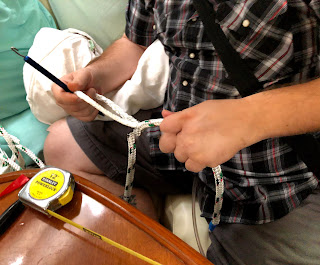 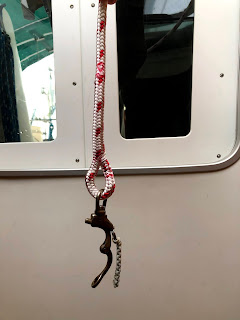 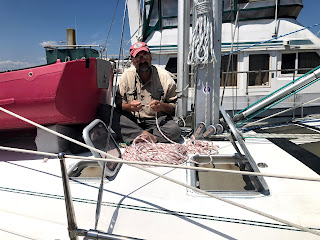 In April, several people in our marina helped save a boat that was taking on water at the dock.  I wrote up an article for the Facebook group Women Who Sail that I included here.  Great story. 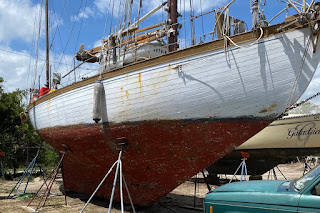 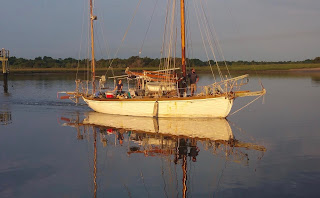 I would like to share how a boat that was taking on water at Brunswick Landing Marina in Brunswick, GA was saved by many helping hands at the marina, but especially by the help of one of our members, Hood on Symbiont.
Early Tuesday morning April 14, 2020, the sailboat JoyBird started taking on water.  The owner, 88 year old George, was trying to handle it himself, but called 911 at about 4:00 am.  The Fire department didn’t have much help to offer other than waking up other boat owners on the dock.  The first person to arrive was Hood, from Symbiont because her dog woke her up.   George refused to leave his boat.  Hood climbed on board and was able to start his manual pump, since he wasn’t strong enough.  They realized that the manual pump alone wasn’t going to remove enough water.  Hood went for more help.  She woke up Rich on Ohana who brought a hand pump.  Hood contacted Matt and Trish (who works at the marina) next on Alfitairie, who were already awake and on their way to help. They contacted Bjarne, another employee that lives at the marina on Lantz-alot with his wife Deby (WWS).  Bjarne was able to bring the marina’s pump to the boat.

The trash pump arrived about 4:45 am when the water was over Hood’s knees.  Once the water level was down, they were able to access the hole.  George knew every inch of his boat.  He explained to Hood where he thought the hole was.  She was like an extension of his hands finding the hole in the water that was now about a foot deep.  Hood held her hand over the hole and kept the pump clear.  Another boater, Mark, arrived with bung plugs.  They used wooden and rubber plugs, a cut up t-shirt, tar filled gauze and an ultra sized tampon to slow the incoming water.

Once the boat was stable enough to be moved, they had to wait about 2 and a half hours to be hauled out.  They had to wait for the boat yard to open at 8:00 am to be towed to the lift.  On the way from the slip to the haul out lift, the generator running the pump stopped working.  Hood went back in the water to hold her hand over the leak around the plugs for about an hour.  When they arrived at the lift, it was low tide.  JoyBird has a 7 foot draft and was sitting on the bottom, which added to the delay.  Haul out was finally done about 10:30 am.

The good news is that the boat was hauled out safely with the hands of many people at the marina.  George has moved JoyBird to a DIY boatyard where he can make the necessary repairs.  We need a big shout out to Hood for spending several hours in the water in the early morning hours to help save this man’s home.  She deserves the MVP award.  Even though she has her own boat issues, she is always willing to step up and help others.,

Lessons learned: know what equipment and tools you have on board should you start taking on water.  Take some time to get to know your dock mates.  And keep an eye out for what looks normal or unusual on your dock.  Boaters have always been known to come to the aid of others.

A Go Fund Me page has been set up to help George through this rough time, should you want to contribute.  JoyBird is a 103 year old sailboat that George has lived aboard since the 1960’s.  www.gofundme.com, Friends of JoyBird and George.  Thank you.