Monday Sept 21
Now that Dave was done with his Captain’s license test, he had time to help others on the dock with their projects.   He helped Bob, on a trawler, with his electrical problems.  And he helped Ricardo research a new boom.  Last Wednesday, Ricardo and Amy came back from an overnight sail with his boom broken in half!!!  Dave helped by calling a few companies to find out his options.  Looks like Ricardo will be buying a new boom.  We have never heard of a boom breaking.  This boat was a charter boat and then was privately owned.  Maybe it was abused by charter sailors.

Ricardo also used our fuel polisher to clean up his fuel tank.  He had problems with a sluggish motor at the same time that his boom broke.  So this should help keep the lines from clogging.  Dave said he had “algae flowers” growing in his tank and clogging the lines.


Tuesday, Sept 22
The Tuesday craft gathering is really growing.  They have moved from the laundry room to the main part of the yacht club.  I just love visiting with them and listening to their stories of living aboard a boat.  But I don't see myself picking up a new hobby at this point. 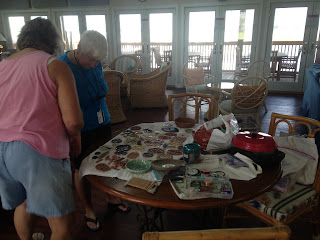 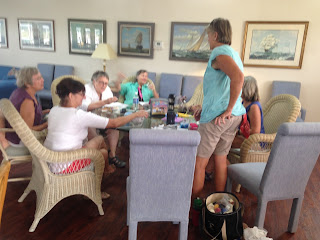 Thursday, Sept24
Today another couple took us to a Hardware store.  Billy and Sherry have the same boat as ours only one year older.  So we are always exchanging ideas.  Dave was giving them some advice about the air conditioning.  So we went for parts.  We also went to lunch at the taqueria by the hardware store.  We are always sharing this awesome little place with friends.

Dave and Ricardo wanted to thank several people on Dock 8 & 9 for helping them.  Dave with test preparation and Ricardo with his boom.  So they decided to provide a happy hour on dock 8.  They provided a case of beer, some wine, and a bottle of Horchata, a cinnamon cream rum drink similar to Rumchata.  About one beer and one shot into the party, an ambulance arrived at Dock 7.  They were going to Billy and Sherry’s boat.   After Billy was on the stretcher and being taken off of the dock, I went over to see if there was anything I could do.  He had been in a lazaretto in the cock pit and the lid hit him on the head.  He was disoriented and couldn’t get off the boat to get to the car.  Sherry was going to follow him to the emergency clinic.  She was pretty shook up, so I rode along with her.  When we finally were able to join him in a room, he looked much better. When they took him for his CT scan, Sherry brought me back to the marina.  A couple women had gone from shot glasses of Horchata to wine glasses.   I think the trip to the emergency room saved me from having a headache in the morning.

Dave spent several days researching what he would need to sew a sail bag.  The bag that holds the spinnaker sail does not protect it from the sun.  When we think we will use the sail, we store it on deck.  So Dave checked into having one made for about $200.   Then he checked into buying a sewing machine to do sew one himself.  In the meantime, he ordered the materials he wanted (after researching that).  In the end, he decided to sew the bag by hand.  So he spent most of the weekend sewing.

Saturday, Sept 26
On Saturday, I did several errands on one of our fold-able bicycles.  I enjoy having them.  The marina bicycles are free, but not maintained very well.

Several people were working on projects in the club house today.  Dave was sewing along with watching Alabama play football with me. 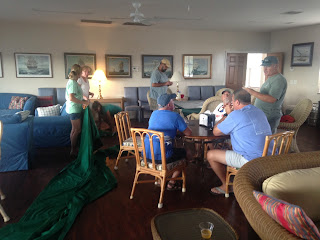 Sept 27
I rode my bike to church this morning and sang with the choir.  It was fun to join them again.  Another day of sewing and football.
That night, we went to a party on another boat on dock 9 to watch the eclipse of the full moon.  Bob and Olivia have a large trawler (motorized boat) at the end of the dock.  She was wondering if we should put together some kind of party to watch the eclipse.  There were some boaters with cars that were planning to drive to the beach and watch it over the ocean.  But I thought  watching it from the deck of their trawler would be fun.  So Olivia invited us to join them around 7:00 for a light dinner of a Portuguese stew and bread.  I offered to bring a salad.  We ended up with 4 couples and Ricardo from Dock 9.

Dave had been up late the night before working on his sail bag.  So he didn’t think he would make it to 10:00 pm to see the eclipse.  It ended up being cloudy, so we only saw an occasional glimpse of the moon.  But we ended up partying until 1:00 am on their boat.  Olivia was the target of Dave’s teasing.  And she gave it right back, which he loves.  After we left their boat, I made breakfast for Dave and Ricardo.  We told him that was an American tradition-to have breakfast after the bar closed.  Haven’t done that in years! 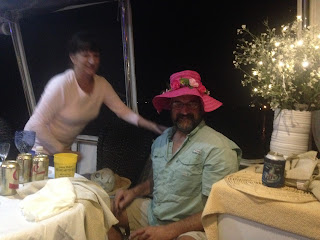 Monday, Sept 28
Sherry and Billy gave me and Ricardo a ride to a grocery store today.  They dropped us off and picked us up 2 hours later.  We went through every isle together.  I explained what some things were and how I used them, or what I liked to use on our boat, or where to find certain things.  I think it is a challenge to learn conversational foreign languages, let alone boat parts and all the foods, etc. He is actually doing really good.  But here is one example-he didn’t know the difference between buying diced tomatoes that were Mexican flavored vs Italian or plain.

Sept 30
I was the net controller for our cruiser’s net this morning.  At the end of the routing information, we have either been sharing jokes or trivia.  So today I asked trivia questions about the movie being filmed in downtown Brunswick.  Ben Affleck is filming “Live by Night” here in late October and early November.  But the set is being built now.  And a friend of ours had her picture taken with him yesterday.  The location is an old neighborhood in Tampa, FL known as Ybor.  It was settled in the late 1800’s by a Cuban cigar manufacturer that brought in immigrants from Cuba, Spain, and Italy to work in the factories.  The movie takes place in the 20’s or 30’s.  I guess GA offered some great tax breaks to film here instead of in Tampa.  There is a restaurant that opened there in 1905 called the Columbia and is the oldest restaurant in FL today.  They have opened others in Clearwater Beach and St Augustine that we have been to (also Sarasota).  Their menu gives the history of Ybor, so we were familiar with it.  And the restaurant is fantastic, if anyone had the opportunity to eat there.  Now we want to go to the original one in Tampa.  There is Flamenco dancing in part of that restaurant, so we would make reservations to be seated in that room.  Their 1905 salad and the Cuban bread are sooooooo good.  And they have amazing dishes.  Just look at their menu online and you will book a flight for Tampa today. 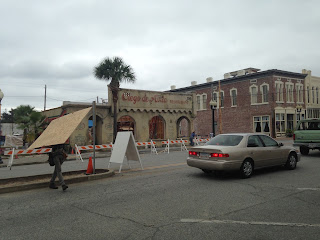 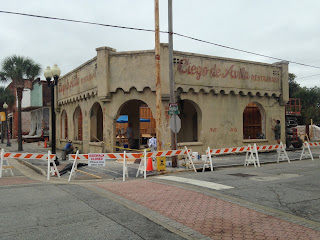 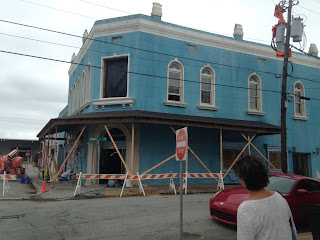 Posted by svluckofafool at 11:06 AM