We spent the next few days prepping the boat.  Dave-boat prep and me-domestic prep,
Dave flushed and drained our air conditioner.  We probably won’t use it once we leave the marina.  It takes too much power.  We would have to run our Honda generator to power it, and that uses gasoline. We want to save that for running our water maker or charging our batteries, if needed.  He cleaned the bilge.  Water from the air conditioner runs into the bilge, which Dave would use the pump to empty everyday.  Now that the air conditioner will be shut off, we wanted to clean any film from the walls and start fresh.
He placed caulking around each of the windows that we reattached or replaced.  He repaired a latch on the aft head window.  We don’t open it often at the marina, so it was a surprise when it recently broke and had to be added to the work list. 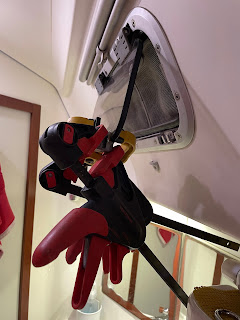 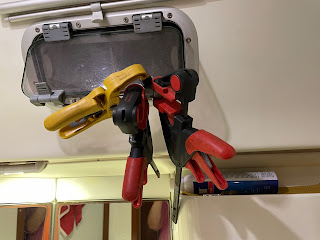 Next he “ran through the systems” to make sure everything was in running order, lights, engine, water maker, etc.
Before I could provision the boat (buy groceries for 3 months) we needed to store the tools and clean the storage areas we use the food products.  I spent also spent time in general cleaning.  Over time, the interior walls get a growth of mildew, some places worse than others.  Usually it wipes off easily, but occasionally it stains the walls.  We have a great product for that called Presto.  You spray it on, leave it 10-20 minutes, and it’s gone.  Love that stuff.
Monday was spent provisioning.  I spent 3 hours between Publix and the Neighborhood Walmart (smaller) buying dry goods (will get fresh fruits and veggies the day we leave)  The Publix cart was getting a little hard to maneuver.
I also spent 3 hours at the boat packaging and storing the food.  Most everything that is in cardboard comes out of its box and is stored in ziplock bags.  This is done for a few reasons.  The cardboard picks up moisture and becomes soggy.  It takes less room in a bag.  And cockroaches lay their eggs in the cardboard and can hatch later on.  Actually, that’s more common in corrugated cardboard and in remote areas.  But better safe than sorry.  I removed the contents and put them in a bag.  I also cut off the instructions and put them in the bag.  Then several of those bags were put in a tote together.
I group canned goods and put them in ziplock bags.  Moisture can rust the cans.  I also take a marker and write the expiration date in large numbers on the lids.  Saves having to search for it later.  I have a couple cupboards I stock with basic or things in glass containers.  The rest I store through out the boat, mostly under a seat in the salon area.  In the forepeak (or v-berth where we sleep). I put things under a bench, under the floor boards, and some in a closet.
I also have an app on my phone called What’s on my Boat.  So I document each item with how many I have and were I have it stored.  When we’re at a marina, I just replace things as needed.  But this really helps me when I have things stored.  Of course, you have to be diligent about removing the items on the app as you use them.  AND that doesn’t always happen, but it works pretty good.  I guess we were too busy to take photos

Posted by svluckofafool at 6:28 AM