To move further south in the the Sea of Abaco, you have to transit the Whale Cut.  The sea is too shallow, so you have to go outside of Whale Cay on to the Atlantic and back into the Sea of Abaco.  The seas can be rough and hard to navigate through rocks, so you always check the weather or with other boaters before transiting.   It’s not far from Green Turtle Cay, only one island south before the cut.

We decided to head out and if it looked too rough, we would come back to GTC.  We thought it looked a little rough but doable.  And other boats were heading through.  So we decided to go for it.  It was a “sporty ride” with an average of 22kn ESE wind, and took us an hour and a half to go out and back in to the Sea of Abaco.


After entering the Sea of Abaco on the south side of the Whale Cut, we saw 2 mega yachts anchored near Baker’s Bay on Great Guana Cay.  There is a high end resort there and many expensive vacation homes, we’ve been told, not visited ourselves.  We googled the boat names for info.  Planet Nine is used as a charter boat, but is owned by Nat Rothschild of the famous Rothschild Swiss banking family.  His net worth is $1 billion.  The boat is for sale for $100 million with annual running costs of $5-10 million.
Madsummer is also used for charters but is owned by Jeffrey Soffer whose net worth is $2.2 Billion.  His family bought property 17 miles north of Miami and developed the area to become Adventura, with several properties in the area, including the largest shopping mall in Florida.  This boat is worth $250 million with $15-18 million for annual running costs.  The info also said there are 10 cabins for 12 guests and 28 crew (who must have their own cabins).  Unbelievable! 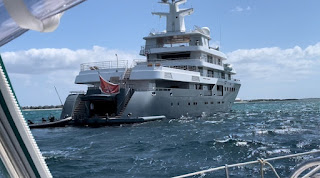 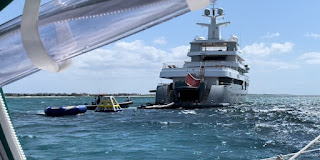 We arrived at Elbow Cay at 2:30.  We anchored outside of Hopetown near the light house.  Good to see it still standing and functioning, though it could use a coat of paint.  We hung out laundry (a little later than we usually do).  Dave refilled our fuel tank and we took the jerry cans into town to “top up”.  There won’t be another place to refuel until after we cross to Eleuthera.  It was about 3:45 when we arrived at the fuel dock, but they had closed at 3:00.  We’ll make another trip tomorrow.
We decided to walk around town and look at the destruction from hurricane Dorian in 2019.  They were hit pretty hard.  Some places looked untouched, some repaired, lots of work being done, and some things were totally gone.  It was strange to look up on the hillside where the large Hopetown lodge used to sit and see blue sky.

We stopped at Captain Jacks, on the water in the bay to have our first Bahamian beers, chicken wings and fries.  Great view of the lighthouse from the east. 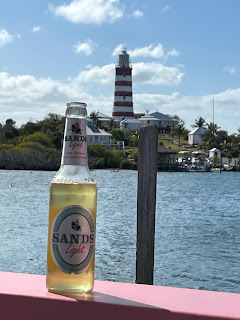 We headed back to the boat before sunset and watched the lighting of the light house from the west side in our anchorage.  It is one of the few kerosine fueled light houses still functioning in the world.  It is manually run every night by volunteers.  My niece, Kate Zeller Murphy, told us about an app called Marco Polo.  We made a video of the light house as it was lighting and sent it to her and Memphis, her 6 year old daughter. 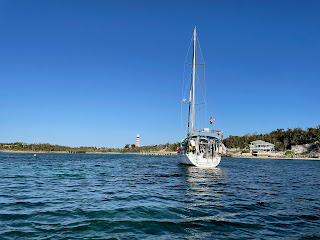 Posted by svluckofafool at 6:16 AM