January 8-27, 2022 Oklahoma visit to help my sister after knee surgery

Sometime over the last couple months, I decided to go to Oklahoma for a couple weeks to help my sister Beverly recuperate after knee surgery.  I have had both of mine done.  I remember how nice it was to have someone take care of me the first couple weeks.
I flew to Oklahoma on January 8 to be there a few days early.  We made some meal plans grocery shopped.  We made some adjustments at home to make it easier to maneuver a walker around her house (moved rugs and cords, installed raised toilet seat, etc).
Jan 9
We always go to a great German restaurant in Norman, OK when I visit.  The Royal Bavaria restaurant is one of the most authentic German restaurants I have found in the United States.  (There are a couple in MN.). Jan 10
I brought my Alabama hat and ear rings to wear for the college football championship game.  Bev was a good sport and watched the game with me.  BUT, the Georgia Bulldogs beat Alabama.  We have had better years.  It was actually great to see Georgia win for the first time in about 40 years, if I remember correctly.

Jan 11
We were up very early to get Bev to the hospital for her knee surgery today.  Her surgery went very well, and she was even up and walking that day.  I stayed to help her with her dinner and get her settled for the night.  I ate at a Mexican restaurant on my way back to her house.  I sent my compliments to the chef for not over cooking their shrimp in a land locked state.
Jan 12
After a session with her Physical Therapists, and reviewing her medications, Beverly was given the OK to go home.
Beverly’s lovely neighbor brought her a pan of home made cinnamon rolls and a pan full of buns.  So much for dieting.  We did freeze some the buns and shared some of the rolls.  Very yummy! 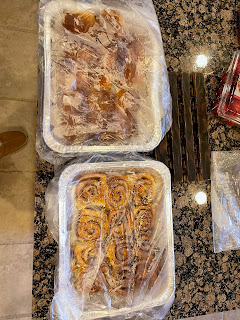 Barb Webster visited on Friday the 14th.  I have met her several times over the years.  She brought Bev stuffed ruby slippers and socks like the ones for the Wicked Witch in the Wizard of Oz and flowers.  We had to make Bev pose for a picture.  Then Bev put them up against the couch so you’d see them when you entered her front door.  Got lots of laughs from visitors.  Barb had seen them hanging out of trunk of a car and thought they were hilarious.  Bev will have lots of fun with them. On January 23, Kevin and Mya picked me up to show me their land where they are building a new home with an attached mother-in-law apartment for Bev.  It is 3 acres that has a narrow side along the road and goes back to border undeveloped forest property.  The house will be towards the back of the lot at the highest elevation.  They have cleared some trees and leveled the lot for the house and work shop.  Quite an undertaking!

After the tour, they dropped me off at Bev’s so I could load her up to go to their house for dinner, her first outing.  Melanie made us yummy chicken enchiladas.  It was nice to spend another evening with them.
This week we made sure Bev was able to drive her car.  We had to stop for ice cream just to see if she could make it in and out of a store without her cane.  She will start physical therapy at a facility not far from her home.
I stayed long enough to get her to her 2 week check up with her doctor.  She was comfortable driving in her town, but not sure she wanted to drive in heavy traffic.  We also made some meals with left overs to get her through another week.
It really was great to be there for Beverly.  Plus we have fun being together.  My flights back to Georgia were uneventful, which is what you want.

Posted by svluckofafool at 9:29 AM