Dec 12
After a nice breakfast at a nearby restaurant, we hit the road.  We stopped on the south side of Memphis for BBQ.  The place was very busy, so we decided to eat at the bar.  After we ordered a drink, but before we ordered dinner, we realized they allowed smoking at the bar.  Well, that wasn’t going to work.  We left and found one of our favorite southern chains, O’Charleys.  They were out of ribs, but we survived because of their fresh hot rolls.  We continued to New Albany, MS between Memphis and Tupelo.
Dec 13
We finally found a BBQ place we likes as well as Willie Jewel’s.  We stopped in Childersburg, AL, halfway between Birmingham and Auburn at Hometown BBQ.  Their ribs weren’t ready, but they brought us one each before we left.  The brisket and pork were great.  To pass the time today, we listened to a rebroadcast of the Alabama-Georgia football game.  I never thought I would listen to a game that I had already seen.  But we like the radio announcer and wanted to hear his comments.  It was strange how we knew the final score, but had forgotten many of the plays.  So it was still entertaining.
We spent the night in Columbus-Fort Bennington, GA at a Holiday Inn Express which was upgraded to a suite because we were IHG members.  I am adding this for the benefit of others, and to help me remember.  When you book a room, you need to tell them that you are IHG members to get the points.  They don’t do that automatically.  I spent the evening talking to a representative to get all the points for the past couple years credited that I had missed.  And at one time we had 2 numbers, but that was corrected already.
Dec 14
We made a side trip on the way home to visit Providence Canyon State park.  This is from their website:
Georgia’s “Little Grand Canyon” is a testament to the power of man’s influence on the land. Massive gullies as deep as 150 feet were caused simply by poor farming practices during the 1800s, yet today they make some of the prettiest photographs within the state.
So it is a fairly young canyon and is still slowly eroding.
We had a beautiful hike to the canyon floor and into a few gullies.  I’ve been wanting to make the trip, but it was about 5 hours from Brunswick, more than a day trip.  So this worked out great.
We stopped at one last BBQ restaurant in Albany, GA.  Hogs and Bones was similar to a fast food restaurant.  You ordered at a counter and there was a drive up window.  The ribs were good, but the chicken and pork were dry.  Dave said I should have started my blog post with “It was the best of BBQ, it was the worst of BBQ”.  We tried them all.
We made it back to Brunswick, GA safe and sound once again. When people ask us about our safety when sailing, we tell them we feel safer on the water than on the highways.  Dave feels that our demise will be because of someone else’s mistake on the highway. 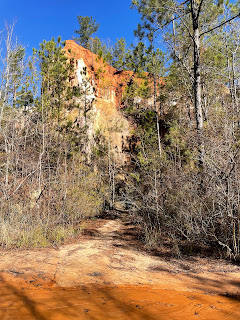 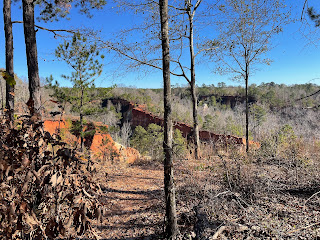 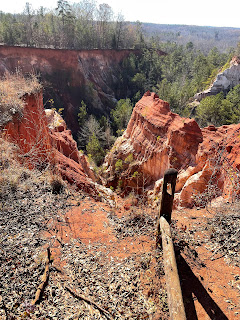 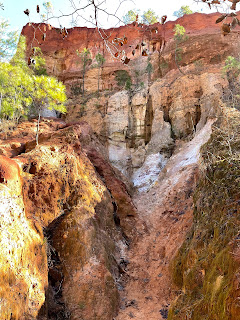 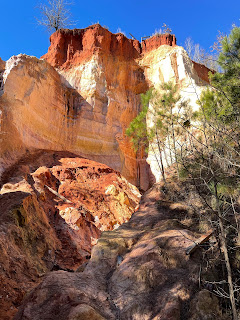 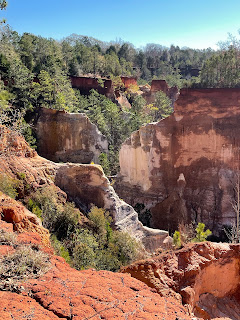 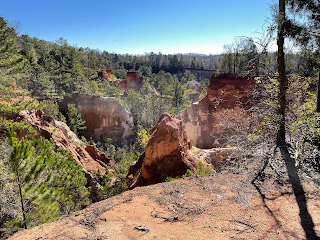