Earlier this year, my grade school girlfriends and I planned a long weekend together in southern MN.  I thought I was going to be in Wisconsin visiting Dave’s mother, so the VRBO in Fairmont, MN would be a good place to meet.  When we plan our time together, it’s more about just being together than site seeing, shopping, etc.  So a house on a lake sounded perfect to us.

With our unexpected trip to SD in June/July, we visited Dave’s mom.  Dave and I decided to go our separate ways.  Dave flew into Minneapolis and rented a car for 5 days.  I flew into Sioux Falls for 12 days.

I had a late flight into Sioux Falls on Tuesday, August 18.  Sheryl Gerdes Bedard picked me up at the airport to stay with her. On Wednesday, I met a long time friend, Chelle Foley Hart, for lunch.  I used to guide her cross country skiing at the Black Hills Ski for Light.  Always fun to catch up with each other. 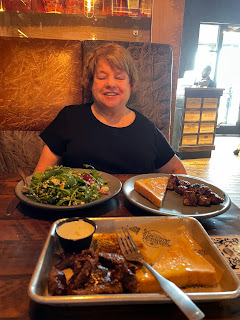 We spent Thursday preparing for the weekend.  We also enjoyed Sheryl’s lovely back yard.  She has always had a green thumb.  Gail Wieland Zeller arrived from Miller. 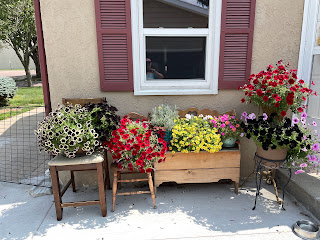 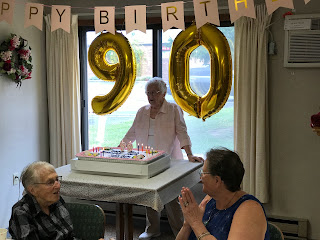 Thursday was Dave's mom's 90th birthday.  They celebrated at Alice's apartment building with family and friends.

On Friday, Gail, Sheryl and I drove to Fairmont, MN via Lake Okoboji, Iowa.  Gail had never been there. We had a nice lunch by the water, shopped a little, then headed to Fairmont, MN.
Lori Landgrebe Schneller joined us in time for dinner.  We enjoyed a beautiful evening on our deck. 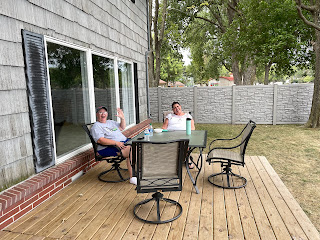 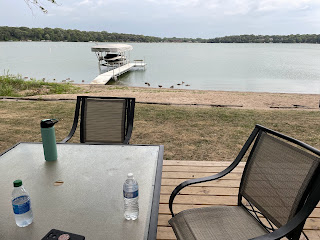 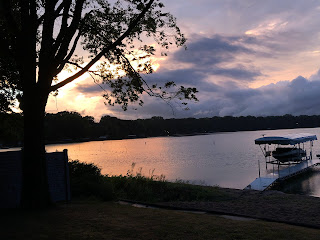 On Saturday, the 21st, Lori and I went for a walk and found a nice coffee shop.  So we went back to the to get the others and enjoyed our morning there.  We enjoyed a lazy day together at the lake house.  We considered going out for dinner, but ended up ordering pizza. 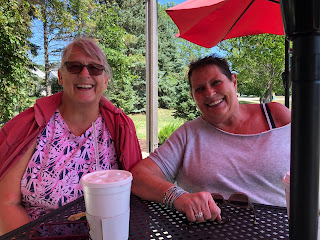 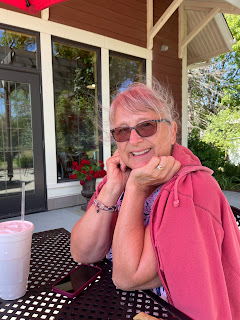 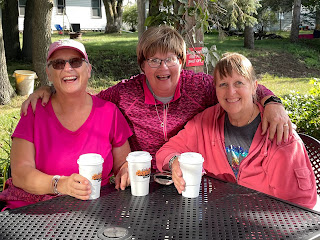 Lori walked to church with me on Sunday.  It was about a mile away.  We took a tour of the town.  It’s very pretty with 5 lakes and many parks.  We grilled steaks on the grill tonight.
Lori brought a box of old photos from high school and a few years after.  We had so much fun reminiscing. 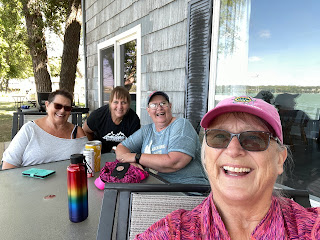 On Monday, Lori’s sister called and told her their 100 year old mother was not responding in the nursing home.  Lori packed up and headed to Miller, SD.  This was our warmest day, so I took a kayak out on the water.  We spent most of the day on the deck and enjoyed a bonfire that night. 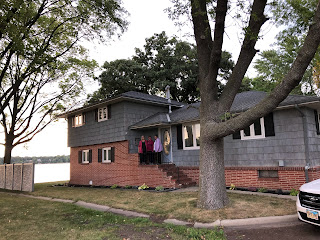 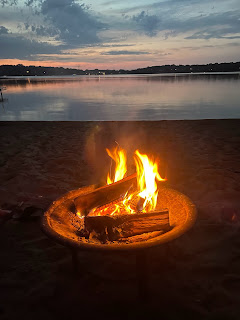 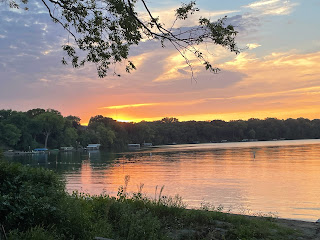 Tuesday, lazy day at the VRBO.  Wednesday morning we packed up and cleaned up and headed to Perkins for breakfast.  As we were driving back to Sioux Falls, Lori called to tell us her mother passed away peacefully in the nursing home.  The family had a private service before taking her to Sioux Falls for burial.

Lori’s family was in Sioux Falls for Lori’s niece’s wedding, Kelly Wong.  She was marrying Peter Heidepriem, the son of a high school classmate or ours.  They met after college and had no idea that they each had a set of grandparents and parents that had lived in Miller, SD.

They had a gathering in remembrance of their mother, Bernita, at a restaurant in Sioux Falls and asked us to join them.  Sheryl had perfected their mother’s chocolate chip cookie recipe and made some to take for the family.  They were so appreciative.  We had a nice visit with Lori’s siblings and some other friends in town for the wedding. 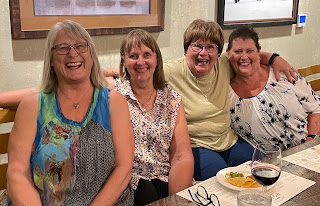 Saturday evening there were tornado warnings in the area.  In Sioux Falls, there was very heavy rain.  A tornado touched down near Lennox, SD, 15 miles from the wedding reception venue.  But all was ok.

Sunday morning, my flight was delayed because my flight couldn’t come in on Saturday night with the severe weather.  That put me on a later flight out of Atlanta.  And I had to switch gates 4 times in Atlanta before we had a functioning airplane.  I should have been home by 12:20pm and it ended up being 7:00pm.  Good thing I am retired.

Posted by svluckofafool at 7:18 AM