Saturday was a lazy day.  Dave took Pete to the airport bright and early.  We hung out at Griffen Park in town, but on the Missouri River.  After church, we had a chicken dinner at Don’s and all went to Zesto’s for ice cream, a must do in Pierre, SD.

Don has been telling us for years that we should spend July 4 in Pierre, so we decided to stay longer.  We started the day, Friday, with the parade in Ft Pierre.  Don had his favorite spot, so we met him there.

We spent the afternoon at the state park on the Missouri River near Oahe Dam.  All of Don’s daughter’s and spouses were there with Memphis, Garrett and Claire, along with Beverly.

That evening, we all met in Ft Pierre to watch the fireworks.  The rodeo had fireworks after their last event.  But there were several private displays that were amazing all along the river.  We were on a hillside taking it all in.  Katie had picked up some fireworks to enjoy with her daughter, Memphis.  But I thing we had more fun with them. 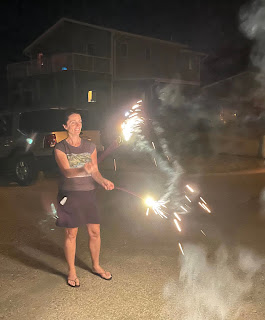 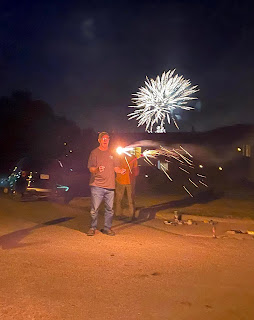 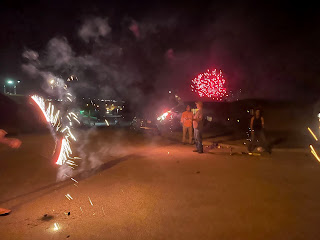 We said our sad good-byes that evening, as everyone was heading their separate ways in the morning.  Katie planned to stay longer with Don for a few days.  It will be such a change for their family without Linda's presence.  I just hope we can help ease that burden in some way.

Posted by svluckofafool at 3:11 PM