May 1-9, 2021 Brunswick Marina chores and adventures

5-1 Saturday
I have been spending the week cleaning out our cupboards and storage areas.  The walls all needed cleaning.  When you spend a winter in Georgia, the warmer walls inside the boat pick up moisture which then turns into mildew.  It is also a good time to get rid of things we don’t use.  Some things go into storage, others get tossed or put on the “free table” in the clubhouse.  All kinds of things show up there.
As I was cleaning the walls in our v-berth, I also cleaned our small port windows (don’t open, only for light) that are on the hull (vertical outside walls).  To my surprise, one of the windows was loose.  The “glass” is “glued” against the hull.  The end towards the bow was loose.  If we hadn’t discovered this, a rough wave could have pulled the window out and filled our v-berth with water.  What a mess that would have been!!
SO, another project on the list.  Dave started researching online what to use and talking to other boaters that have replaced their windows.

5-2/3 Sunday/ Monday anchor retrieval
Friends on a neighboring boat took their father out for a nice Sunday afternoon sail.  They anchored in the Brunswick River straight out the channel that leads to our marina.  It was getting close to sunset when we received a call from them.  Their anchor was caught under something and they weren’t able to retrieve it.  Their dinghy had a leak, so they couldn’t get in the water to check it out or pull it from a different angle.  In the process of trying to bring it up, they broke a cleat off of their toe rail.  That’s when they decided to call us.

We took off to help, but called a retired Coast Guard boater, to be on the alert.  We couldn’t get it to release either.  They tied a fender to it and figured they would hire a diver to retrieve it tomorrow.  It started raining, so we high tailed it back, actually faster in our dinghy than they were in their boat.

On Monday, Dave took another guy from our dock and returned by dinghy to where they left the anchor.  He took a big carabiner with a line attached and let it slide down the anchor rode. This allowed them to pull from a different direction. They were hoping it went down the shaft of the anchor, but they couldn’t see that for sure.  They pulled in different directions with the dinghy.  If they pulled on the fender it was tied to, it would only set it further or continue to stay under whatever was holding it (which we did last night).  After several tries, they could see the fender following them, which meant the anchor was free.  It was a good test for possible use in the future. 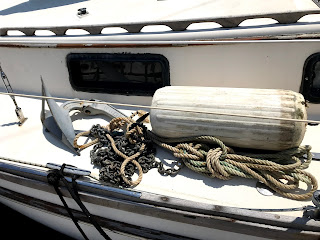 It worked so well that Dave bought us a real anchor retriever. 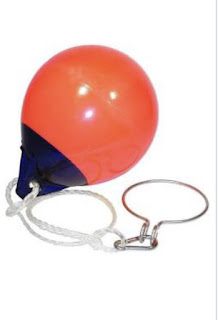 May 3
Another dinghy ride to Marshside Grill with Brunswick Landing Marina friends.  It's about a 30-45 minute ride by dinghy, depending on everybody's outboard function/or not.  It's a good time to check your outboards and dinghies and have fun. 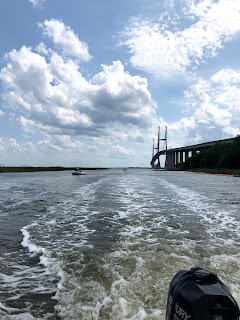 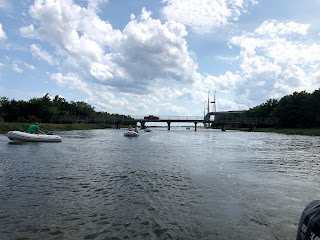 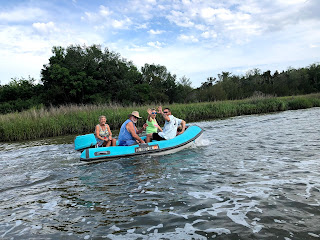 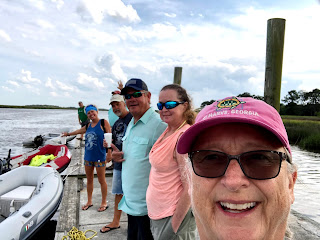 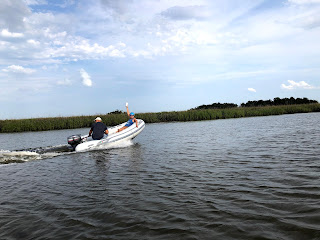 May 4
I wanted to wash our curtains inside the boat.  I had never removed the entire slide that is mounted to the wall above the window.  Occasionally, I still find an area that I have never cleaned in the 8 years we have been living on the boat. 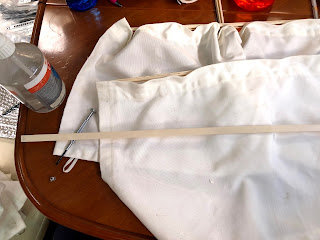 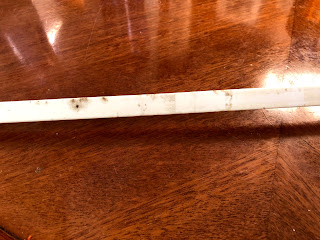 May 5
We started the process of reattaching the port windows.  Now our boat has a pirate patch over it’s left eye.  Of course it couldn’t go smoothly.  The first one broke as we tried to remove it.  Dave decided to check all of the windows.  4 out of 6 are loose. 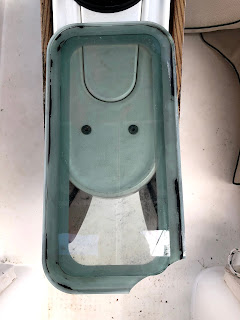 Now he is talking to another boater about using some of his leftover glass to replace this one and any others as needed.

May 9
My church in Brunswick, St. Francis Xavier celebrated our Lady of Fatima feast on May 9. It is the anniversary of when Mary appeared to 3 shepherd children in Fatima, Portugal.  We have a large Portuguese population here because of the fishing years ago.

After placing the crown on Mary’s head, she was paraded outside and around the park across the street from the church.  Such a beautiful ceremony. 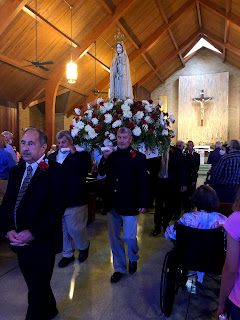 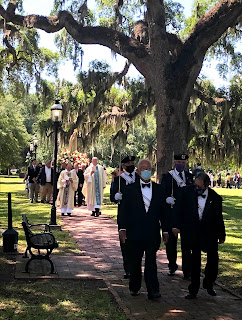 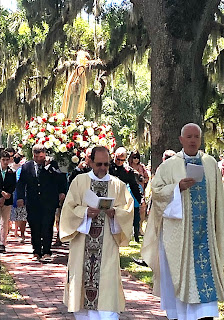 Posted by svluckofafool at 8:11 AM