I have shared the details of Peter’s hospital stay with many family members and friends.  Therefore, I will give an abbreviated version for my own memory/records.

In the early hours of Tuesday, February 19, the CT scan determined that the pain was not from his appendix.  They could see an abscess in his ilium, lower section of his small intestine.  Not sure at this point if surgery was necessary.  First mention of possible Crohn’s disease because it affects this part of the intestines.  Spent most of Tuesday and Wednesday waiting for different doctors to check him and come up with a treatment plan.

On Wednesday, February 20, GI Dr ordered another CT scan, Pete started feeling worse, ended up in emergency surgery from 10:00-11:30 pm with Dr Tsai.  They removed 10cm of necrotic tissue in the small intestine and the connection to the colon.  He has had digestive issues for years that had gone untreated, just dealt with it in his diet.  He had an open wound with a wound vac that helped with internal healing vs just closing the surface.  Before sending us home for the night, they told us they moved him to ICU because of his breathing.  He needs to be on a ventilator until he is stable.  We kissed him goodnight and tried to get some sleep.

On Thursday, February 21, we were told that his right upper lobe of his lung was collapsed.  When a patient is on a ventilator, they take a chest x-ray daily and discovered the collapsed lung.  It was hard to know if it had been that way or if it had happened during the surgery.  A bronchoscopy was done and a mucous plug was removed.  It should re-inflate on it’s own, but would be monitored.

He had a hight fever and was on Tylenol and antibiotics.  Infectious disease Dr was monitoring antibiotics and watching for sepsis.  GI Dr said a biopsy was done to see if Pete had Crohn’s Disease, which will take 3 days.  His blood pressure was dangerously low 85/40, so they started him on fluids, then put in a pic line to give him a vasoconstrictor to increase his blood pressure.  Took blood culture to see if septic, but takes several days.  That can lower the blood pressure. 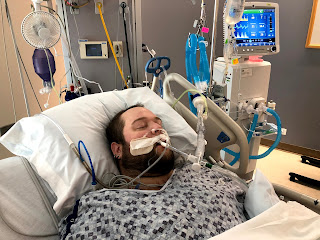 Friday, February 22, Dr Tsai said they were no longer concerned about his renal failure.  That was news to us.  He will need a second surgery to close his wound in about a week, but they won’t keep him on the ventilator until then, probably only a couple more days on vent.  He was kept on high dose of pain med and sedation because of the ventilator tube.  The Respiratory therapist lowered the dose when she cleaned his vent tube.  He opened his eyes and I was able to assure him that everything was alright.

Wound care changed his dressing, looked good.  No longer on blood pressure meds.  Lung re-inflated.  Will wean him off of the ventilator by decreasing the oxygen and the pressure.

Saturday, February 23, Infectious Disease Dr said blood cultures didn’t show signs of sepsis.  But his lungs could be infected, which is prolonging the use of the ventilator.  Dr Tsai said that long term infection in his intestines forced bacteria across the diaphragm and into his lungs, which increased the infection there.  Plus the intestines were swollen, which crowded the space for the lungs making it more difficult to fully inhale and clear infection.

CCU DR/pulmonologist said they would remove fluid off his lungs to help them improve.  Pete had a CTA, computed tomography angiogram to check for a blood clot about 3:00pm and was given blood thinners.  I waited until 7:00pm for the Dr to tell me the results.  Finally, the RN on duty said he wasn’t coming back that evening, but the test was negative for a blood clot.  Whew!!

Sunday, February 23,  started on steroids and bronchodilator to help with lung infection.  Fluid wants to settle in back of the lungs when the patient lays in bed for many days.  Started reducing the % of oxygen.
Dave and I both visited Pete today.  Usually, I would sit at Pete’s side all day talking to the various doctors, therapists and nurses that came and went, and making notes.  I had a little table set up with my computer in a corner.  Dave continued to work on the boat and stay busy.

Monday, February 24, still on ventilator.  Dr Tsai confirmed that Pete does have Crohn’s disease.  He had cardiac, renal and pulmonary failure!  Heart and kidneys are doing fine.
His body was very stressed going into the surgery, so just taking longer for lungs to improve.
Started Pete on IV nutrition, one week after being admitted to the hospital.
Dr said I should take time for myself, not stay here so much.  Dave and I went to a movie that night, The Call of the Wild, thinking it would be light hearted and scenic.  Harrison Ford’s character headed into the wilderness because his son had died.  Not what we wanted to see at the time.

Tuesday, February 25, continued to drop the oxygen %.  Before leaving, Pete gave my hand a squeeze.  I asked him for a squeeze for his dad and he lifted his middle finger.  I asked if he was flipping him off and he nodded yes.  Later he told me it was because I had told him we were going to a Mardi Gras party at the marina. 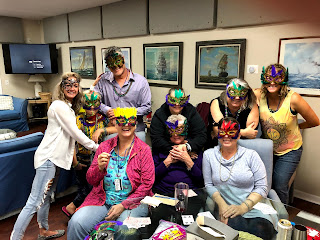 Wednesday, February 26, Dr Tsai thought Pete’s wound looked good and was ready to close, but he wanted his lungs to be more stable first.  He won’t start him on tubal feeding or real food until he is off the ventilator and can tell him whether he is passing gas and how his abdomen feels.

Thursday, February 27 my sister, Janice Moore, and niece, Sherri Zeller Hansen, arrived to spend the day.  Janice is spending a couple months at a condo in Florida south of Tampa.  Sherri lives in Key Largo, but was returning from work via airplane.  They met in Tampa and drove here overnight.  We went out for breakfast then to the hospital.

We talked to Dr Tsai at 9:30 am.  About 5 or 6 am, RN Jeanette noticed feces in his JP drain from his abdomen, indicating leakage from his anastomosis-the connection of his intestines.  Dr came in early and decided to schedule surgery.  They will open him, wash the area and stabilize.  Will go in again tomorrow to wash again and reconnect or place an ileostomy.  Worse than a colostomy, because fluids don’t get absorbed in the colon, dehydration and lack of electrolytes.

Surgery was from 1:00 to 2:30.  It was called exploratory laparotomy bowel resection with possible ileostomy.  After surgery, Dr Tsai said the anastomosis had not connected at all.  Probably because of the severe inflammation at the time.  He removed about 5cm of small intestine and about 10cm of the ascending colon to the proximal end of the transverse colon -right semi colectomy.  He stapled the ends and will go back in tomorrow to wash again.  He’ll either reconnect the ends or place the ileostomy. He was feeling more confident that the ileostomy wouldn’t be needed.

It was really nice to have Janice and Sherri here.  It gave us something else to visit about instead of just staring at each other from 9:30, when we found out the news, until the surgery was completed at 2:30.  After seeing Pete, we took Janice and Sherri to St Simon’s Island for BBQ and to see the pier at the inlet.  Then we drove over to Jekyll Island for a quick tour right about sunset.

They stopped to see Pete one more time and took off for Florida.  It was a long day for everyone.  But so thankful they were here.

Friday, February 28, lungs were stable after first surgery at 50% oxygen.  Blood sugar has been high, possibly because of being on steroids for the lungs.  Started a long acting insulin.  White blood cell count was high, added another antibiotic.

Surgery 1:00-2:00 Dr Tsai-NO ILEOSTOMY!!  2 JP drains, hoses with little bulbs about the size of a pear.  The wound vac is now different.  This one will allow the wound to close naturally.  Will probably take about 30 days.  So will probably leave the hospital with a traveling wound vac.  Asked why so much more colon was removed.  The ascending colon was more diseased.  And the position of the transverse colon will promote healing better for the anastomosis than in the position of the ascending colon with the first surgery.  (FYI, the appendix is now gone, too.)

Saturday, February 29, started Pete on trials of spontaneous breathing without the aid of the ventilator.  By 1:00 he was OFF OF THE VENTILATOR, 10 days!!  He was less sedated so was able to converse, even with a face mask for oxygen.  Dave come up, and we spent some time updating him on the last 2 weeks.  He had ice chips for the first time and was in heaven. 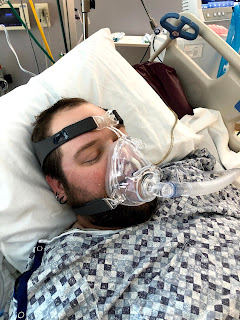 Monday, March 2, Pete gets a nebulizer treatment every 6 hours, including during the night.  Rough time sleeping.  Physical and Occupational therapists helped Pete stand for the first time, pretty weak.  May need to go to in patient therapy after leaving the hospital.

Tuesday, March 3, Nasal tube out and started on clear liquids.  PT had him up and down more today.

Wednesday, March 4, Pete had chicken broth and apple juice and thought he was in heaven.  Later that day he had his first BM and called it a “religious experience”.  Great day.

Thursday, March 5, White Blood Cell count has been high, but may be from steroids, will monitor.  PT walked around the 2nd floor!  Eating soft solid foods. 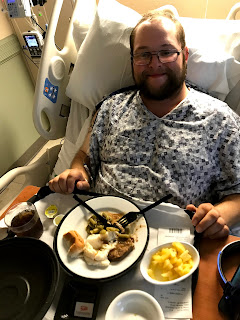 Friday, March 6, Was able to walk to the bathroom and wash up.  Blood sugar is still high, but may be from other medications. 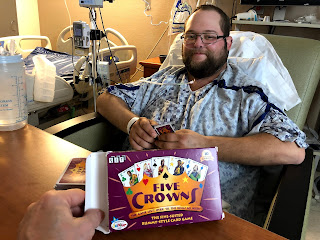 Saturday, March 7, count was normal.  PT said he probably won’t need to go to rehab after dismissal, just out patient PT.  Played guitar for about an hour.  Good therapy for his hands, lungs and mind. 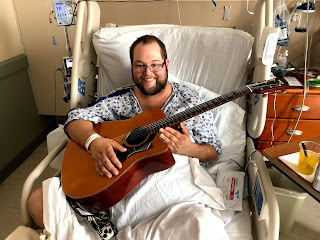 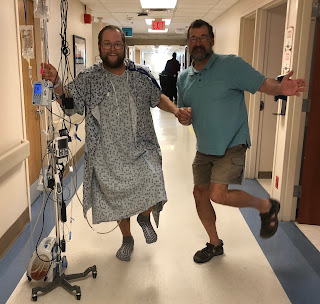 Monday, March 9, lots of visitors, hospitalist, surgeon, PT (walked again), OT, Infectious Disease Dr, dietician, GI Dr.  All checking him out for dismissal and plans for after dismissal.  Started him on IV iron. 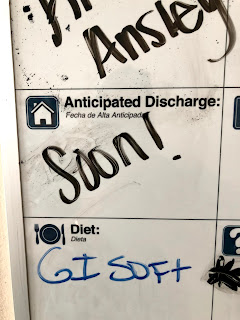 Tuesday, March 10, Dr Tsai arranging for mobile wound vac to be set up.  More iron and tapering off steroids.

Wednesday, March 11, Dr Tsai gave ok for dismissal.  Hospitalist wants him to have more iron and will give discharge orders tomorrow.  Setting up care for after dismissal.  Wound care twice a week at Dr Tsai’s office.  PT at the hospital’s PT as outpatient.

Thursday, March 12, hospitalist came in about 10:00 with discharge orders.  Wound care reviewed wound vac care.  Nurse reviewed meds.  Dressed with a belt for the first time, uncomfortable.  Out the door by 2:45pm.  He was almost in tears being able to see the sunshine and breathe fresh air. 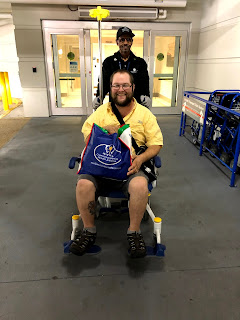 We had rented a VRBO condo on St Simon’s island since it was difficult for Pete to walk and bend, let alone climb on and into a boat.  We ended up with one that had the bedrooms on the second floor.  The stairs were actually good therapy for Pete.

What a journey!!  We feel very fortunate that Pete was living in Georgia, and we were able to help him through all of this. Thank you to everyone that supported us through this whole ordeal.  And thanks for the many prayers for Pete’s recovery.  He has a lot to learn about Crohn’s disease and how to live with it.  He will be receiving infusions of immunosuppressant drugs after his wound is healed.  But for now, he is out of the hospital!!!