November 6-20 highlights
On Sunday, November 10, the historic district of Brunswick hosted a Porch Fest.  There were about 10 homes that allowed their front porches to be stages.  Then local musicians performed for free for one hour at a time.  The acts changed on the hour.  Some repeated or moved to another stage, but others only performed one time.  There were food trucks in a centrally located park.  It was a great day with hundreds of people mingling the streets.  There was no charge for the entertainment.


November 18-Pete was cooking dinner on the dock using their grill.  Had to capture this sunset. 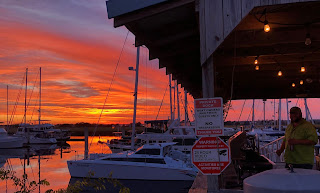 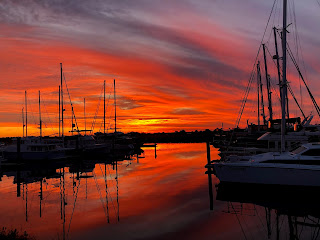 Pete’s 32nd birthday was November 20.  He made arrangements to return to Rapid City, SD to play with his former band at the 85th anniversary of one of their favorite bars, the Brass Rail.  But before leaving town, we had breakfast at our favorite local restaurant, Maggie Mae’s.

Posted by svluckofafool at 4:20 PM