Monday
We left Zermatt to board the Glacier Express panoramic train.  The train had enlarged window that went part way onto the ceiling.  The view was awesome.  We enjoyed dinner on the train.  It was served at our seats. 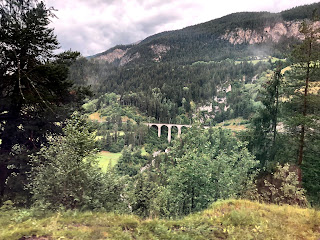 The Express train was supposed to end in San Moritz, but we stopped one stop before at Samedan.  We had found out from Christine that a mutual friend lived there.  We planned to visit her while we were here.

We stayed in a Gasthaus in Samedan.  There was a church next to the hotel with a bell tour right outside our window.  We had to sleep with ear plugs. 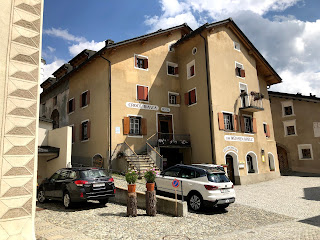 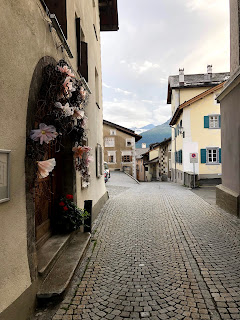 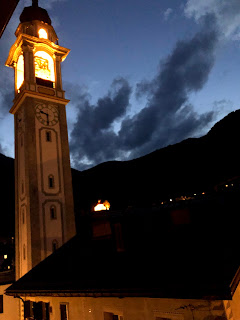 Tuesday
We enjoyed another lovely breakfast at our hotel.  We spent the morning washing out some clothes by hand and making future travel plans.

We had a great lunch with a local Swiss dish called capuns, made with Swiss chard.  The pizza looked so good that we returned for dinner.  The pizza had 4 toppings.  Each quarter had a different topping instead of mixed through out the pizza. 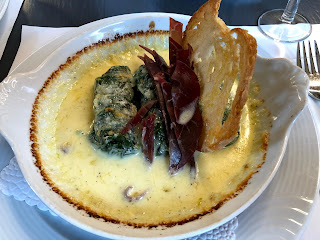 Today we visited a long time friend, Maria Carroll.  She was from Switzerland, but had lived in Rapid City for many years.  We met her through Ski for Light, an event for visually and physically impaired skiers.  After falling at home, she moved back to Switzerland to live with her sister.  She is widowed and had no children. 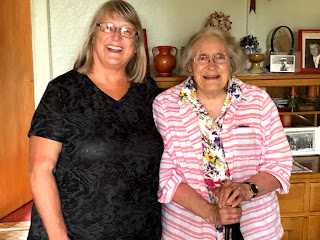 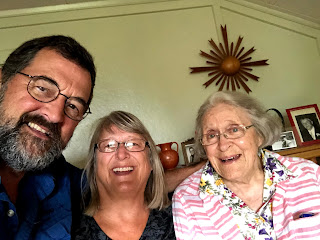 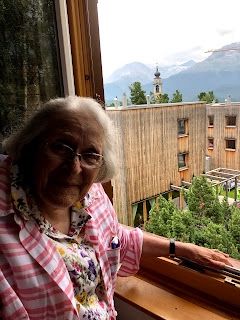 We were able to walk to her home (small town).  We had a wonderful afternoon reminiscing about mutual friends.  We also found out more about her life growing up in Switzerland.  What a wonderful unplanned event.
Posted by svluckofafool at 10:03 AM