Saturday 5-25
I was up to take my watch about 1:30am.  I hadn’t slept well because the boat was heeling to port, which caused me to slide off the bed in the salon area or occasionally grab the shelf on the starboard side.  I wished Dave good luck as he went below to sleep.

We had other ships paralleling us, but no issues with crossing paths.  It was an uneventful night.  Dave figured out a good way to sleep.  When we make the table into a bed in the salon, we lower the table top and insert two cushions.  He took out those two cushions which made a well to sleep in.   There were cushions surrounding you to keep you in place.  And we use a cushion off our our bed, so you aren’t directly on the table top. 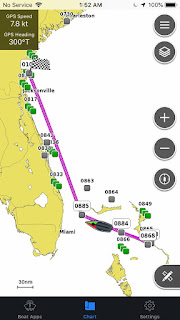 Once we were in the Gulf Stream, we went from 6-7k to 8-11k with an average north east wind about 15k.  Perfect day for sailing and making time.  About 4:00pm we shortened sails since we were heeling about 15-30 degrees with wind gusts.  So about 5:00, we took down the sails and started motoring.  That helped level out the boat so I could make dinner and get some sleep.   Dave started his watch and I went below about 7:30pm.  He was nice enough to take a few sunset photos for me. 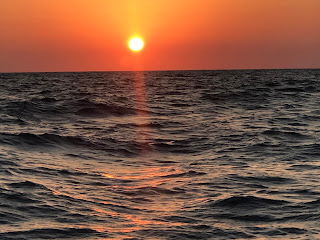 5-26 Sunday
I was up at 2:00am to start my watch with 130 nautical miles to go.  We were traveling about 40 miles offshore, so no wifi yet.  The winds were light and variable, so it was comfortable for sleeping.   We had charted where to turn NW towards Brunswick, GA and reached that waypoint at 2:30am.  We had predicted 3:00am.  Even though we were turning NW, we were still in the Gulf Stream until about 5:30am when we went from 10k to 8.5k.  Hated to lose that boost in our speed. 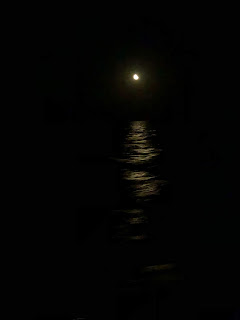 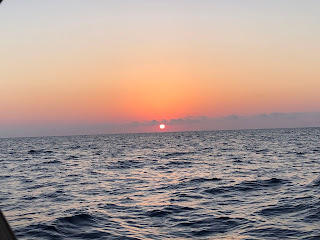 Dave was up by 7:30am.  It seemed to take forever to get to Brunswick.  We entered the inlet about 6:00pm.  We caught the sunset at the Sidney Linear bridge.  We continued on to Brunswick Landing Marina and tied up at dock 1 by 8:00pm right after sunset with plenty of light.  It ended up being 470nm in 60 hours.  WHEW!  Good to be “home”. 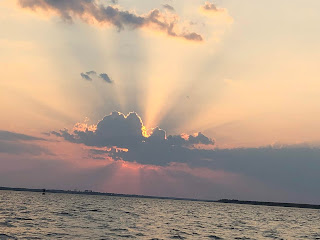