Friday
We planned to leave early this morning for Elbow Cay and get fuel once we were there.  But some friends we met 3 years ago were March Harbor and heading to the bay we were anchored in.  So we decided to wait so we could see them again.  Dave took the jerry cans in the dinghy to a resort in the next bay, Orchid Bay Marina, to get fuel.

While we waited, I polished Alice’s toenails.  I was about to start mine when our friends arrived.  We met Joe and Yvonne McTeer three years ago at an anchorage in the Abacos.  We spent several evenings together that year.  Yvonne and I became Facebook friends, but we hadn’t seen each other since then.  They came to our boat for about an hour.  It was so fun to see them again.  They enjoyed meeting Dave’s mom.  They could easily see where Dave gets his sense of humor.  Alice really enjoyed visiting with them, too.  So even though it was short and sweet, it was a really nice visit. 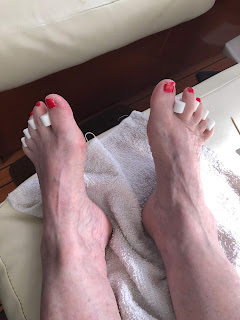 We moved the boat to Elbow Cay and anchored near the light house.  We thought the wind was going to get stronger, so we considered getting a mooring ball, but had heard that there weren’t any available.  We checked with the Hopetown Marina, but they were also full.  Anchoring outside ended up being just fine. 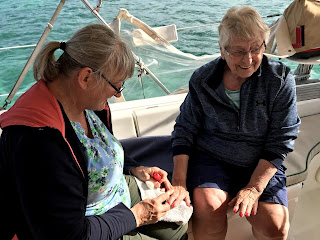 I had made tzatziki sauce with yogurt, cucumber and garlic.  Dave made grill bread and grilled chicken.  Yummy dinner with salad.  We watched to lighthouse light up.  It is lit by kerosine and manned by volunteers all night.  First you see them draw back a curtain.  Then you see the glow of the kerosine lamp.  Then it starts the rotation of 5 flashes one second apart, then 3 seconds blank, then 5 flashes again.  Another must see in the Abacos.

Saturday
Since Hopetown is a small town, things close up on Sundays.  That determined which day would be shopping and which would be beach.  Dave dropped off Alice and me to do some shopping.  He refilled the jerry cans with fuel to have full cans on deck.  There are only a handful of gift shops and 2 grocery stores.  We stopped at a couple stores, but the electricity was off.  Someone said it there was a problem with trimming trees today.  I made it to one grocery store at 1:00, right when they closed.  I was hoping to get homemade key lime pie from Vernon’s.  I stuck my head in the door to see if they had any.  I was told they don’t even make them on Saturday, since they close early.  What a disappointment. 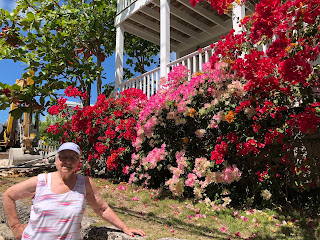 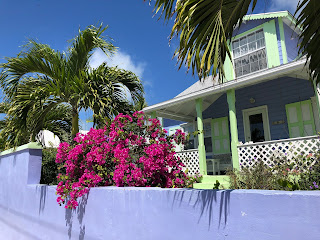 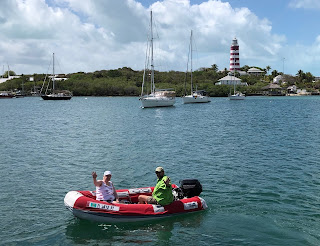 I went to the other grocery store and picked up a few items, including ice cream (for Alice, not me and Dave hee hee).  Back at the boat, we had a lazy afternoon.  Dave and I both swam off the boat and then showered.

Dave grilled brats for dinner, which we ate outside in the cockpit to watch the light house light up again.  Alice and I spent the evening playing 5000 with dice in the cockpit.  Such nice weather.

Posted by svluckofafool at 8:47 PM