Tuesday
Today we moved to Green Turtle Cay and were there by 2:00 pm.   On the way there, we watched a storm in the distance with a water spout.  They are similar to a tornado on the water. 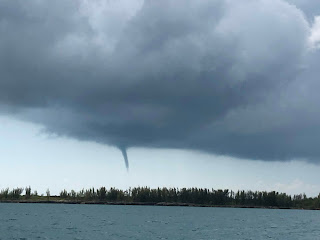 We took the dinghy in to a beach landing.  The docks here have ladders to climb, so we thought the beach would be easier for Alice.  We stopped at a restaurant, the Wrecking Tree.  We said we were going to order drinks now, then lunch after Dave returned from the BTC office.  The waitress said they were only open on Thursdays.  She even called to double check for us.  So I guess we’ll hang around a couple days.  The next place to get them is in Marsh Harbor and we don’t want to go there right away. 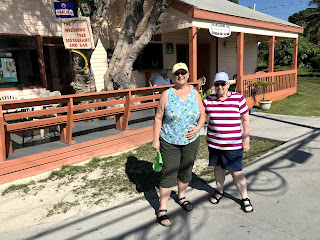 The restaurant had wifi we could use, so we called Dean and Debbie, Dave’s siblings, using the app Hangouts.  We were only able to leave a message, but at least they knew everything was ok.  We also booked Alice’s return flight for the 13th.  Debbie has an appointment in Minneapolis that day and will be able to pick her up.

I went to a little grocery store nearby to buy milk.  They didn’t have any, but they had home made peach ice cream, which we had to have.  Our freezer doesn’t keep ice cream, so that’s a real treat for us.  We headed back to the boat for a windy night.

Wednesday
We wanted to go back into Green Turtle on Thursday to get our Bahamian SIM cards.  But this was a windy anchorage.  So we back tracked to the north about 5 miles to Manjack Cay.

After anchoring, we took the dinghy to a beach.  To get to one that wasn’t in the wind, we had to go through a shallow area.  Dave ended up getting out and pulling us through.  It was getting close to low tide, so we had to wait for the water to rise before returning.  In the water we saw turtles and a large starfish.  At the beach we saw several small conch.  Dave walked around the end of the island to the ocean side and found 2 full grown conch. 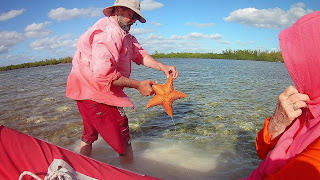 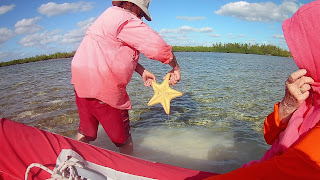 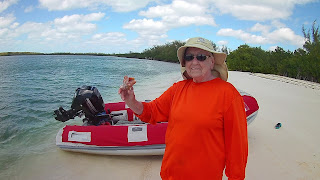 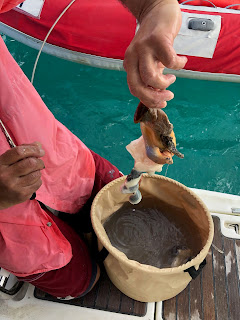 We also made up a fruit/coconut punch.  Our first rum punch. 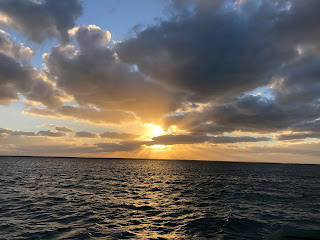 For the first time in my life, I TOTALLY forgot that it was Ash Wednesday. I didn’t realize it until the next day when I saw a church advertisement for service while in Green Turtle.

Posted by svluckofafool at 5:50 PM