Wednesday
Well, our saga continues.  At 5:00am, the hotel’s fire alarms went off.  Dave stuck his head out the door and people were heading to the stairs.  Alice refused to move.  Her legs had been cramping most of the night from all the walking she did.  She didn’t think she would be able to stand up.  I decided to go outside and call them back to let Dave know if he had to help Alice down the stairs from the second floor.

There was a firetruck outside and a lot of people.  No one seemed to know what the problem was and no one looked panicked.  I could see firemen inside in the breakfast area working on something.  I called Dave and told them to stay put.  Here’s what our take was:  at the elevator on the main floor, there is only one button for the elevator for going up.  Right above it is the fire alarm button.  If you don’t look at them, it would be common to push the top button for going up.  Dave and I both noticed that.  Of course, the fire department needs to check it out and turn off the alarm. 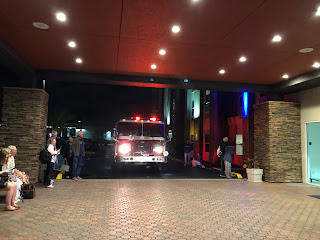 I set the alarm to get up for the complimentary breakfast.  Then I took some food up to the room for Dave and Alice.  If you know me, I just wanted to talk to people now that I had coffee in me.  I asked for a late check out and made some phone calls.  First I called Dave’s sister, Debbie.  She had heard about our shenanigans last night, so she was eager to hear the whole story.  After I added the part about the fire alarm, she said “that sounds like a shitcom!”.  I like that term.  I talked to a couple other people before I heard from Dave.

We checked out and headed back to Fort Pierce.  We missed 2 turn offs along the way, but made it back in our zombie mode.  We extended our car rental for another day because I wanted to pick up some groceries before returning it.  We did nothing for the rest of the day.  We didn’t even want to start talking to the credit card to file an accident claim, or file the highway accident report.  We wanted to have clear heads.

Dave did do some testing on the water maker that were suggested by the company.  Alice and I sat out in the cockpit and enjoyed the nice evening air to stay out of his way. At least that was our excuse to do nothing.

Thursday
This morning we got to work on the mess with the rental car.  Dave filed the accident report online.  I started the accident claim with VISA online.

By late morning, Alice and I headed to the grocery store.  Dave worked on the water maker again while we were gone.  Everything worked great.  Yeah!  Looked like our luck had changed.
I took the car back to Enterprise to start that process.  The person handling our paperwork when we checked out the car seemed new and was really slow.   So I figured this would be a long process.  They were pretty busy, so she took the copy the report and said someone else would contact us.  When she looked at the car, she could see where the left fender would have to be realigned.  She asked if I had talked to the credit card company.  I actually hadn’t because I filed the claim on line.  So after I got back to the boat, I called and talked to someone after entering our number about 4 times and waiting on hold.  After a long conversation about what forms they would need, they sent me an e-mail so I would have a connection to send them estimates, bills, etc.

That night, we went to the Tiki Hut at the marina for dinner.  They had great fish tacos.  Back at the boat that night, Dave looked at the rental agreement from Enterprise for some reason.  He noticed that we had used our Master Card and not the VISA card!!  We always use the VISA, but we got new cards a couple weeks ago.  Mine has had trouble reading the chip.  So we used the Master Card instead.  It was about 8:00pm but I called Master Card through Capital One.  They said I would have to talk to someone between 8 and 5 Monday-Friday.  Better get that done in the morning since we are leaving for the Bahamas for 3 months at noon. 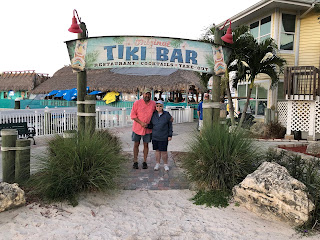 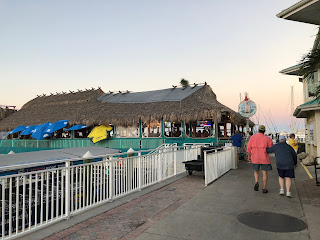 Posted by svluckofafool at 5:19 AM