November 29, 2018 'Splash" back in the water at Charleston City Boatyard

We woke up freezing again and decided to head out for breakfast again.  This time we went to a nearby coffee shop at 7:00am.  The windows on the car were all frosted, but they didn’t have a scraper in the car.  So we just sat with the defroster running for awhile, better than in the boat.

When we came back, we checked with the office about when they would put us back in the water.  They said they plan their lift schedule 4-5 days in advance.  And since we were an add on, they couldn’t give us an exact time.  They said it would happen before 4:00, but if anything changed in the schedule, they would put us in.

There was another couple in the office.  They’re boat had just been brought in yesterday on a trailer and placed next to ours.  The man had a sweatshirt on with Buffalo School of Dental Medicine, so I had to ask if he was a dentist.  Yes, he and his wife were both Pedodontist.  And he had been an instructor, then Dean of the dental school in Buffalo.  They had a 50 foot sailboat in the British Virgin Islands for 20 years, but it was destroyed in hurricane Irma last year.  He showed me pictures that were really sad to see.  He said looters had taken all the teak inside the boat within the first 24 hours.  So here they are with a new boat.  My previous dental partner, Liz Tarby went to dental school in Buffalo, NY while he was an instructor.  So I had to get his name to let her know.  This small world always amazes me.

We walked down to the dock to see the 36 foot hunter that the North Dakotans bought.  They said they were to be hauled out at 9:30.  No one was at the boat, so we just checked it out form the outside.  The boat yard crew came down to the boat to haul them out.  Since they weren’t there, we said we were ready to go.  We hustled back to the boat and prepared the few things we needed and were ready by the time the lift was to our boat.  There wasn’t time for another coat of paint over the new fiberglass, so Dave added Lanacote to seal it.
I stopped in the office to pay our bill.  By the time I headed to the dock, the boat was in the water and Dave and 2 boat yard hands were trying to hold it against the dock.  The current trying to pull it away from the dock.  I felt like Dorothy in the Wizard of Oz.  I came running yelling “don’t leave with out me!  There’s no place like home!”  We were so excited to be in the water and on our way by 9:15. 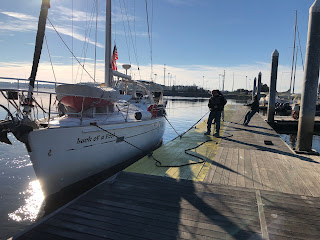 Just as we were pulling away, the ND couple showed up.  We told them we kept them out late last night so they would sleep in, and we could steal their slot for the lift.  They were happy it worked out for us.

We decided to go past Charleston and take the ICW today. We thought we were leaving at 4:00 and were going to anchor nearby.  So we hadn’t made a plan for going off shore, or even checked the weather.  The timing was good for us to get to the draw bridge and the Elliot Cut with the proper current.  So once again, we had the “luck of a fool”.

While we were heading to Charleston, I decided to book my flight to SD while we had decent wifi.  We’ll be in remote anchorages for a couple days and may not be able to pick up a signal.  We talked about having our son join us in GA for Christmas, but that would involve taking time off for work.  So I decided to go to Rapid City instead.  Dave will stay at the boat and do lots of projects.  We want to get new canvas, which takes a several weeks.  While I was looking at flights and how long to stay, Dave suggested I stay until the end of January and go to Ski for Light.  For anyone who doesn’t know, that is an event I volunteered for between 1990 and 2013.  It is a week long skiing event for visually and physically impaired people.  I guide someone cross country skiing.  So that’s what I did.  I don’t think that is what Pete had in mind when he said I could stay with him for Christmas.  But I have lots of friends to stay with if our mother/son time gets to be too much.

We found a lovely spot to anchor with one other boat along the ICW by 4:00. 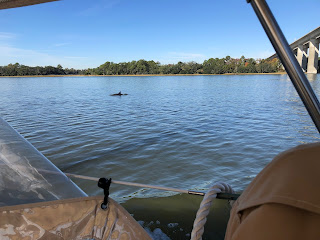 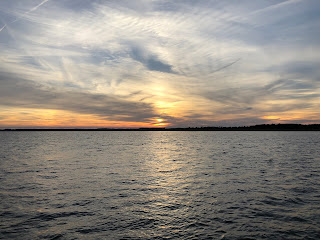 Posted by svluckofafool at 5:17 PM