Tuesday
Happy Birthday to our son, Pete!!  He is 31 today!  Can’t believe it myself.
Since it was going to take about 30 hours to get to Charleston off shore, we would have an overnight no matter what time we left.  We were in no hurry to leave this morning.  Our “weather man” Chris Parker recommended leaving Tuesday night if heading to Charleston because of possible squalls, which also brings gusts of wind.  Chris also has a tendency to tell you “worst case scenario”.  We discussed taking the ICW vs going outside.  There is a section coming up on the ICW that passes through a military installation, Camp Lejeune.  It is a Marine Corps training facility.  There is a section of the ICW that runs through the camp which is a live firing area.  We had a phone number and called to see what time they would be closing the ICW today.  They said nothing was scheduled for today, which was unuasal.  After looking at all the areas of shoaling and the bridges we would have to wait to open, we decided to take our chances with the weather on the outside.  After all, we consider ourselves “salty sailors”.

Before leaving today, Dave emptied most of the fuel from the bladder into the fuel tank.


It was 60 degrees and we figured we’d finally made it to the south.  We left at 10:30 and had 20 knots of wind right on our nose.  We were motoring at only about 3-4 knots (usually 6-7).  The seas were pretty rough, so Dave checked the water leak after about an hour.  He said it wasn’t bad for how rough it was.  Here's a video.  I didn't take time to edit it, so the best crashing wave is towards the end.  Now you can see why you can't sleep in the v berth at the bow while under way.


I went below for a while in the afternoon.  It was hard to listen to the hull pounding against the waves.  We also used the sails for most of the afternoon.  That helped us go from 3 to 6 knots.  At 5:00, we had about the same amount of water from the leak.  Every time Dave checks it, he vacuums the water.  After dinner, I decided to lay down outside on the port side of the cockpit since we were heeling to port.  Our salon bed is on the starboard side, so I wouldn’t stay in bed on a port heel.  That didn’t really work for me.  The seas were flatter about 9:00, so I went below to try to get some sleep. 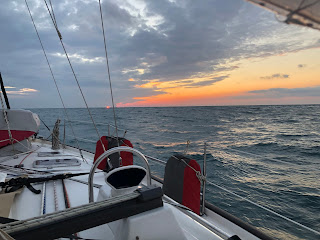 When we sleep in the salon, we take a cushion from our bed with all the bedding and lay it on the cushions on the table that has been lowered.  About 11:00pm, the wind come up unexpectedly which caused us to heel to port.  I slid right onto the floor, mattress and all.  Dave heard me squeal and checked on me.  He said I looked like a taco wrapped up in the cushion between the port settee and the bench along side our table.  I almost stayed there, but I was worried where my glasses ended up that were laying on the bed next to me.  I was able to get up and find my glasses in one piece.  I put everything back on the bed and laid cross ways with my feet on the bench to hold me in place.  We had another strong heel to port about 11:30.  I slid to the floor again, but this time I hit my shin on the port settee.  So I took the blankets and tried to sleep in the v-berth.  There’s a reason we don’t sleep there on a passage, there is just too much up and down motion.  About 12:00 am I decided I may as well start my watch since I wasn’t sleeping anyway.

Wednesday
While reviewing the chart and progress with Dave, I was worried about how strong the winds were, 25 k sustained.  We thought things were going to settle down in the evening.  We were just passing through the shoals south of Cape Fear.  We would have at least another 24 hours to get to Charleston.  And neither one of us was going to get any sleep.  So we decided to head to shore at Cape Fear and anchor to get some sleep.  That being said, it was still still about 20-25 miles to get into the mouth of the river, since the shoals extend out from the point of Cape Fear.  That made it 5:30am before we anchored.  Dave stayed at the helm and I sat there with him, nodding off, but there for moral support.

We slept in until noon, since we anchored at 5:30am.  The anchorage just inside the mouth of the river isn’t very protected from the wind, but it didn’t bother us.  The weather forecast called for high winds for the next several days.  Therefore, we decided to take the ICW to Charleston, or until the weather improved.  We checked anchorages in the early section and decided there wasn’t a great place to anchor if we left today.  We have heard great things about Myrtle Beach Yacht Club, which is about 35nm away.  So we made that our destination for Thanksgiving Day and will splurge by getting a slip.

We usually have “boat lag” after not sleeping a normal night, so we were pretty lazy today.    Dave tried a new bread recipe for Artisan bread.  Yummy. 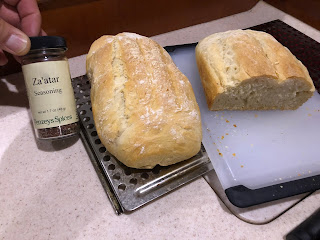 Posted by svluckofafool at 7:32 PM