We left our anchorage at 8:00am and traveled about 5nm to Brunswick Landing Marina in Brunswick, GA.  That put us at the marina about 9:00am.  The marina is hosting the tall ship Lynx for a couple weeks.  We actually followed it into the marina.  As we approached the marina, we contacted them by radio.  They said they would have to get the Lynx docked first, then they would give us our dock assignment and meet us there to dock.  We were getting close to the marina, so Dave was out on the bow getting fenders and dock lines ready.  As the Lynx approached the marina, they fired a cannon.  I could see the smoke and then heard the noise and was chuckling.  Dave had his head down and didn’t see the cannon fire.  He only heard the noise and thought something had blown up on OUR boat.  I got an even bigger chuckle out of that. 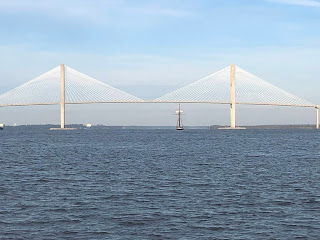 Once we were docked, we walked to the office to get checked in.  We also picked up the new power cords that were waiting for us.  Of course, we had to chat with people we knew as we ran into them.

We both got busy doing necessary chores before leaving to help Patti and Fred with their boats.  I lined up a rental car to pick up in the morning.  I used another friend’s car to go to our storage unit, twice.  I also did laundry, which is FREE at this marina.

Dave had to install the new outlets for the new power cords.  We wanted to hook up power before we left.  We wanted heat, but especially wanted to run the dehumidifier.  This was an outside job at the stern of the boat which was close the dock.  SO, everybody that we knew and didn’t know had to stop and talk to Dave.

Dave had to put the dinghy in the water to get access to the power cord outlets.  So he ran the outboard to make sure it was fine.  He emptied most of the fuel bladder into the fuel tank.  There is a little remaining that he will probably give to someone.  Then we’ll be able to store the bladder again.

2 other couples we knew were going to dinner downtown at Tipsy McSways and invited us to join them.  We walked about 3/4 of a mile to the restaurant and back.  Fun evening getting caught up with them.  One couple was Duane and Peg, who we saw in Rhode Island this summer.  I actually did laundry after we returned.  Whew, busy day.

Posted by svluckofafool at 7:33 PM