I woke up just before sunrise and froze me butt off going outside to take photos.  I went back to my warm bed and decided these would have to do.  Sometimes predawn are actually better than looking into the sun anyway. 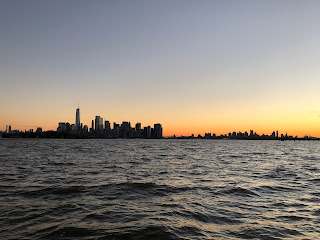 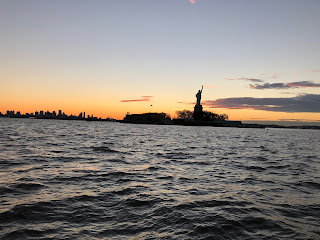 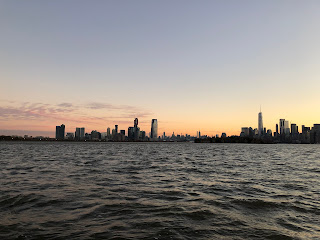 We left our anchorage about 9:30 and headed to Great Kills Harbor on Staten Island.  It was going to be windy and rainy for a couple days, so the harbor would be more protected.
It was easier to cross the Staten Island Ferry route than I thought it would be.  They are going constantly back and forth.  We passed under the Verrazzano-Narrows Bridge about 10:45 officially leaving Upper New York Bay for Lower New York Bay.  The shipping traffic wasn’t too bad.  There were several barges at anchor waiting to go in or out of the city.


We made it to Great Kills Harbor by 12:30 and anchored in the harbor.  I took a quick shower since the engine had heated out water nicely.  It was the first time I took a shower and had a hard time choosing a temperature.  What felt great on my head was burning my hands because they were so cold.  Strange sensation and one of the joys of being up north in November.

We put on our “foulies”, foul weather gear, and headed to shore.  I have a cousin that lives in Glen Ridge, New Jersey about an hour away from here, Kimberly Zeller, Chris and Annabelle Deas.  They met us at a restaurant near shore.  We had lunch and they joined us for dessert.

Kimberly is the daughter of my first cousin, Jim and Jane Zeller.  She has lived in the NYC area a long time.  We have met up with her 2 other times in the city.  Annabelle didn’t have school because of a teacher’s conference, so the 2 of them made the trip to see us.  It is difficult to make plans when you are on the water.  At anchor in NYC, there wouldn’t have been a dingy dock convenient for us to go to shore.   And the marinas are really expensive there, as to be expected.  So this worked out good.  They had a pistachio tartufo dessert here, the second time we’ve seen it now.
By the time we departed, it was raining pretty good.  Kimberly and Annabelle walked us to the dock so they could see out boat out on the water.  Later Dave sent a text to them apologizing for not walking them to their car.  But I explained to Kimberly that Dave didn’t walk me to the door on our first date because it was raining.  So there you go.  I haven’t been able to teach him much over the years.

Posted by svluckofafool at 1:58 PM