Thursday
We woke up to sleet that turned into snow this morning!!  NOW I am ready to head south.  Three times during the night, Dave had to get up and go outside to adjust fenders between the boat and the dock.  The rub rail along the side of the boat is there to protect the boat.  But it was rubbing up and down along a wooden piling playing a tune “composed by the devil” right next to our heads in the v berth.  He switched fenders, retied fenders, then got out an additional fender, then just decided to stay up for the day. 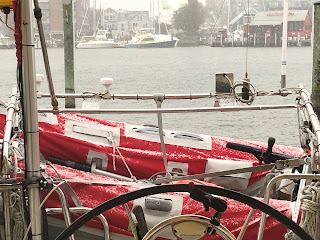 We ended up staying on the boat all day, since the docks were icy.  We made bread, took showers, and enjoyed the wifi and heat.  Simple pleasures.

There is a large Westport motor yacht in the marina that we passed on the way in.  Dave researched it today online.  Winning Drive is owned by the owner of the Baltimore Ravens.  It cost $20,000,000 to build.  Crazy! 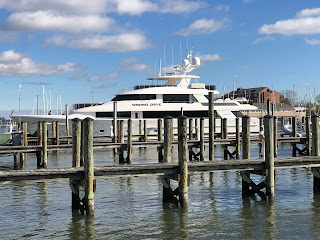 Friday
We headed out early this morning to have breakfast at Chick and Ruth’s Delly.  They are know for their jumbo crab cakes.  AND everyday at 8:30 am, everyone stands and recites the Pledge of Allegiance.  This morning it was led by a young man about 12 whose father was leaving on a Navy Ship.  The warship Sioux City is being commissioned tomorrow here in Annapolis. 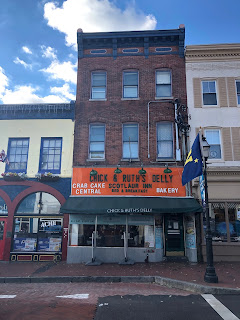 We spent some time at at visitor’s center and shopping for warmer boots or socks.  The Sperry store didn’t have my size in stock in the style I wanted.  And no one had wool socks yet, too early in the season.  So our toes will continue to get cold.  At least we’re moving south.

Back at the boat, I did laundry and Dave refueled.  Then I did a little sight seeing and shopping.  I visited the St Anne’s Church.  Instead of kneelers the length of the pew, they had individual boxes with embroidered tops on them.  I have never seen that before.  Next was the Maryland State House.  This was the first peacetime capitol of the United States in 1783-84.  General Washington came before Congress here to resign his commission as commander-in-chief of the Continental Army.  The Treaty of Paris was ratified here, marking the official end of the Revolutionary War.  Next I saw the home of William Paca, one of the signers of the constitution, but didn’t allow enough time to tour it. So much history in this city!!  We’ll come back again.


After 5:00, I met Dave at the Dock Street Bar and Grill.  We were told they had the best crab cakes in all of Maryland.  They were really good.  So was the crab corn chowder and the crab dip,  Dave had blackened tuna tacos.  That was a first, and they were really good.  We enjoy trying different menus and local specialties.

We were back at the boat early to wrap things up and leave early tomorrow.
Here is a video of the Pledge of Allegiance at Chick and Ruth's


Posted by svluckofafool at 6:08 PM