Tuesday
Today was our day of “boat lag”.  We need to catch up on sleep after an over night passage.  Dave transferred about 35 gallons of fuel from the fuel bladder on the deck to the fuel tank.   We figure we use about a gallon an hour when we are motoring.

I took the time at anchor to make chili.  Perfect weather for that.  I spent some time researching marinas in Annapolis.  We want to wait out some bad weather there.  And it’s time to be a tourist again.

Dave spent some time researching where and who we would like to do the repair of our water leak.  Do we go all the way to Florida?  Or do we find someone along the way?  The marina we go to in Brunswick is not known for their boat work, so we wouldn’t use that marina.

Our insurance company recommended Dave talk to a Beneteau dealer for information.  The man he talked to gave him the name and number of a man that used to work for Beneteau at the factory in the US.  Dave remembered talking to him a couple years ago, because he is French, but had lost his contact information.  He called Jean Michel Morrison in Charleston, SC and had a great conversation with him.  He explained to Dave that the 5200 seal that we placed where the shaft exits the hull would not properly seal that area.  It has to be fiber glassed.  He recommended that we come to Charleston and he would do that repair for us.  He then went on to tell Dave in his French accent that “if this does not repair your leak, we will no longer be friends.  Because I would have to give you a bill as long as your arm.  And you would wish that you had never bought a sailboat.”  We are looking forward to meeting this guy.  He had us send him some photos.  Then we’ll make a plan.

Wednesday
We planned to go part way to Annapolis and anchor.  Then we would get a slip in Annapolis for Thursday and Friday, since we will have bad weather.  We could wait out the weather at anchor, but this will give a chance to see Annapolis, have power/heat, and do laundry.  After checking the weather again, it is supposed to be nasty on Thursday.  So we decided to bite the bullet and get a slip for 3 nights, starting tonight.

We left at 7:30 am.  At about 1:30, we crossed under the Chesapeake Bay Bridge.  We were about an hour outside of Annapolis.  I called the Annapolis Yacht Basin to reserve a slip.  I checked to see that the slips were $2/ft.  He said that was their winter rate that officially starts tomorrow, but they would give us that rate. 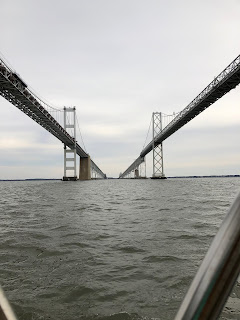 We were in our slip by 2:30 and it took us about an hour to set up the fenders where we wanted and hook up our power cords.  We have 2 cords.  One is for the heater/AC and one is for our house batteries for outlets, water heater, battery charger and water maker.  We also switch our water tanks to the aft tank.  We use city treated water in that tank and only our water maker filtered water in the bow tank.  The chlorine in the city water will destroy the membranes of our water maker.

After getting everything settled, we walked a few blocks into the historic district for dinner.  We caught a great happy hour at McGarvey’s Saloon and Oyster Bar.  We walked around the historic district and ended up at another Irish Pub, Galway, for an Irish Session.  They started at 8:00 (cruiser’s midnight).  We lasted maybe an hour and headed back to the boat.  We are on fixed docks.  So we have to step down quite a ways to get onto the boat.  Don’t want to do that after too many beers. 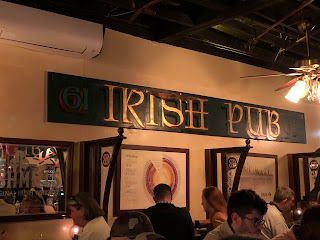