Saturday
We had a windy rainy day at anchor and didn’t go anywhere.  We prepped the boat for going off shore overnight to Delaware Bay.  I made an awesome beef roast with carrots and potatoes.  My mom would have been proud.  I let Dave have a little glory by making the gravy.  We enjoyed our meal listening to Alabama win another football game.  ROLL TIDE!!

Sunday
OK, this morning has to be the coldest yet, 31 degrees.  My glasses were on a ledge next to the hull.  They fogged over when I put them on.  And the toothpaste was so cold, it was hard to squeeze out of the tube.  We made sure we were warm before we headed out this morning.  Since we will be going overnight, we didn’t need an early departure.  It was more important that we were well rested and warm.  We left about 9:00.
Dave had checked the bilge before leaving and everything looked dry.  This will be our first off shore passage with our water leak.  We will be within 3-5 miles of the New Jersey shore.
When we came up that coast, we had wifi and telephone connections the entire trip.  So besides our VHF, we’ll have access to calling for a tow if needed.  I guess we enjoy living on the edge.  Dave checked the bilge periodically and would vacuum out any water with the shop vac.  He only had to vacuum about a quart of water every 6 hours.  Not bad.

The wind was actually favorable to sail most of the day instead of just motor or motor/sail.  Seems like that’s not usually the case.  We had dinner together in the cockpit in the dark.  Days are getting shorter.  We listened to the Packers win against the Miami Dolphins using the Tune In Radio app.  About 7:30 after the game, Dave started his watch and I went below to sleep.  There was a crescent moon over Atlantic City that was a deep orange and beautiful.  Cell phone photos didn't do it justice. 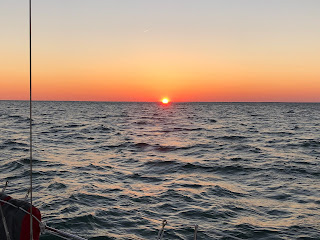 11-12 Monday
I took over watch at 1:00am.  There had been some tugs pulling barges that Dave had to dodge.  And there was one sailboat following us.  It was 37 degrees and a little nippy.  My toes, fingers and nose were the only parts of me that were cold.

I had to continue the dodging game with tugs and barges.  As I was going to enter a shipping channel, one was coming towards me.  I didn’t think I’d have enough time to cross in front of him and be on the side like you would on road traffic.  So I just kept off to the side of the channel until he passed.  Another one didn’t follow the shipping channel, but was crossing it instead, right towards me.  I had to alter my course again.  I could call them and ask them if they are going to maintain that course, but this worked.  Or if moving would put me in danger, I would ask him to alter his course.  They don’t usually like to do that.

By 5:30 am, we were entering the Delaware Bay.  I had another spectacular sunrise this morning.  We originally thought we would anchor once we reached the bay.   But with good weather predicted, we decided we would continue up the bay and anchor before entering the C&D canal, the man made canal that connects the Chesapeake & Delaware Bay. 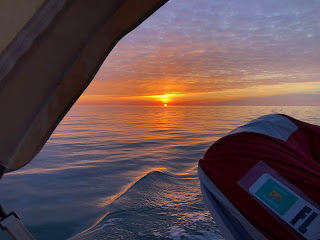 Dave was up by 7:00.  We had oatmeal.  Then I went back to sleep.  There were several ships anchored in the bay waiting to go in our out of Cape May or up the bay to the canal.
I was up about noon and we had brunch together in the cockpit.  We were traveling at about 9 k with the current.  Since we were making such good time, we decided to continue through the C&D canal. It was about 1:00 when we entered.  It was only about 15 miles long, so we figured we’d have time to anchor before sunset.
We pulled off the canal part way through at Chesapeake City.  There is a harbor where we could anchor.  We thought it was kind of shallow and could get crowded.  We decided to move on and anchored at the mouth of the Bohemia River.  It was pretty shallow as we went deeper into the river.  We were more exposed to the wind than we wanted to be, but it worked out fine.  We could see deer grazing on the hillside near our anchorage.  Reminded us of South Dakota.

Posted by svluckofafool at 5:04 PM